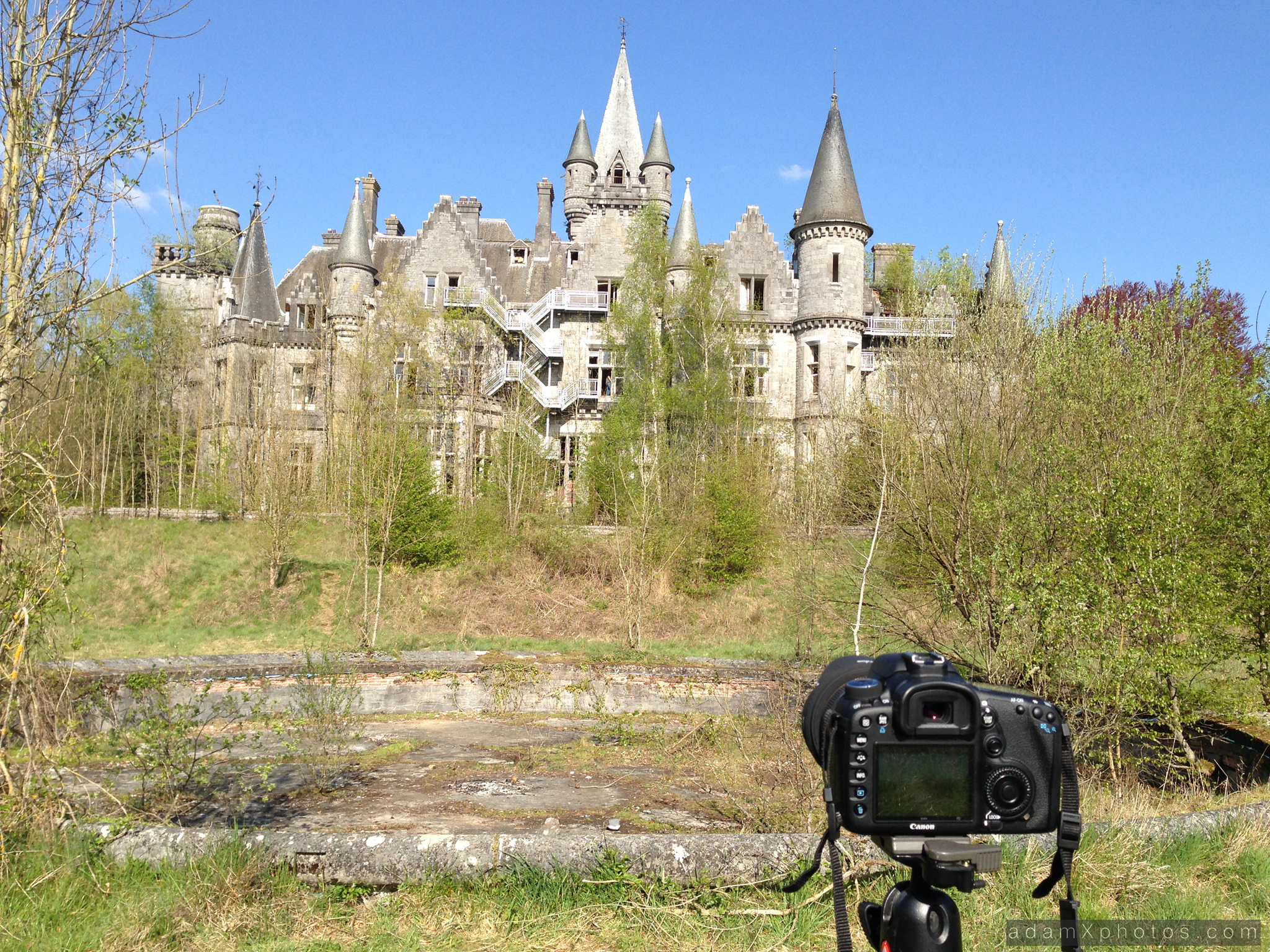 Explore #9 of the 3 Eurovirgins and a Europro tour

The sixth and final explore of Day Two was only just behind the CDC on my most wanted list – a “fairytale” derelict castle buried deep in the Belgian countryside.

As with the CDC I found myself holding back my excitement beforehand in case we failed – stories of the psychopathic groundsman and his shotgun are (in)famous in the urban exploration community!

However, as we started to make our way towards the castle we saw someone who looked very much like an explorer come clambering down a steep slope out of the woods. He clocked our boots, combats, camera bags with tripods hanging from them and we exchanged knowing nods. I gave him an inquisitive raised eyebrow and thumb up as, which was met by a smile, nod, and thumb up in return – yes! No sign of the groundsman by the looks of things!

I allowed myself to start getting excited. Soon I was just very out of breath from the steep climb up, but adrenaline and excitement drove us all on and we soon caught our first magical glimpses of the turrets of Noisy through the trees.

This was a wonderful way to round off a day full of success, and we spent a happy couple of hours exploring this magical place in glorious late-afternoon sunshine.

A brilliantly written and fascinating history of Noisy by David Baker can be read here.

The short history below is slightly adapted and abridged from David’s full article, and all of David’s rights as author are expressly acknowledged.

In 1792 during the French revolution Count Liedekerke-Beaufort and his family, who were heavily involved in Belgian politics, fled their home of Château de Vêves to a secluded farm in the forest on the outskirts of a village in the Belgian countryside. After the revolution the English architect Edward Milner was commissioned in 1866 by the family to design and build a castle on the land.

Château de Noisy was to be built with many towers, conical roofs, and other Neo-Gothic details, with approximately 500 windows. Milner did not get to finish the castle as he died before the building was completed. Work was continued by the French architect Pelchner, who extended the Château greatly, with work finally completed in 1907.
The Chateau was briefly occupied by German troops during War World II, and from 1950 was taken over by the National Railway Company of Belgium (NMBS) as a ‘holiday camp’ for children who suffered from ill health.

After 1970 it was used for outdoor activities and sport holidays for children, and became well known in Belgium.

In the 1990s the owners sought investors to help convert the Chateau into a hotel, but the costs involved proved prohibitive and the castle was abandoned in 1991.
It has since suffered vandalism, fire, and storm damage, and internally many structures are failing. Despite several offers to buy or take over the property the owners have refused to sell it, and in December 2013 formally applied for a license to demolish the castle.

[As always, click on a photo to view large]

The rear of the castle, and long-empty ornamental water fountain.

The famous staircase and ceiling… I actually prefer the colours and textures now to how it used to look!

We tentatively ascended this staircase, which lead up to the clocktower…

The view out from the clock tower!

The decaying and overgrown front of Chateau de Noisy.

Just time for one quick camera-phone shot, before it was time to bid a fond farewell to this wonderful place.

As always thanks for looking – lots more reports coming soon!