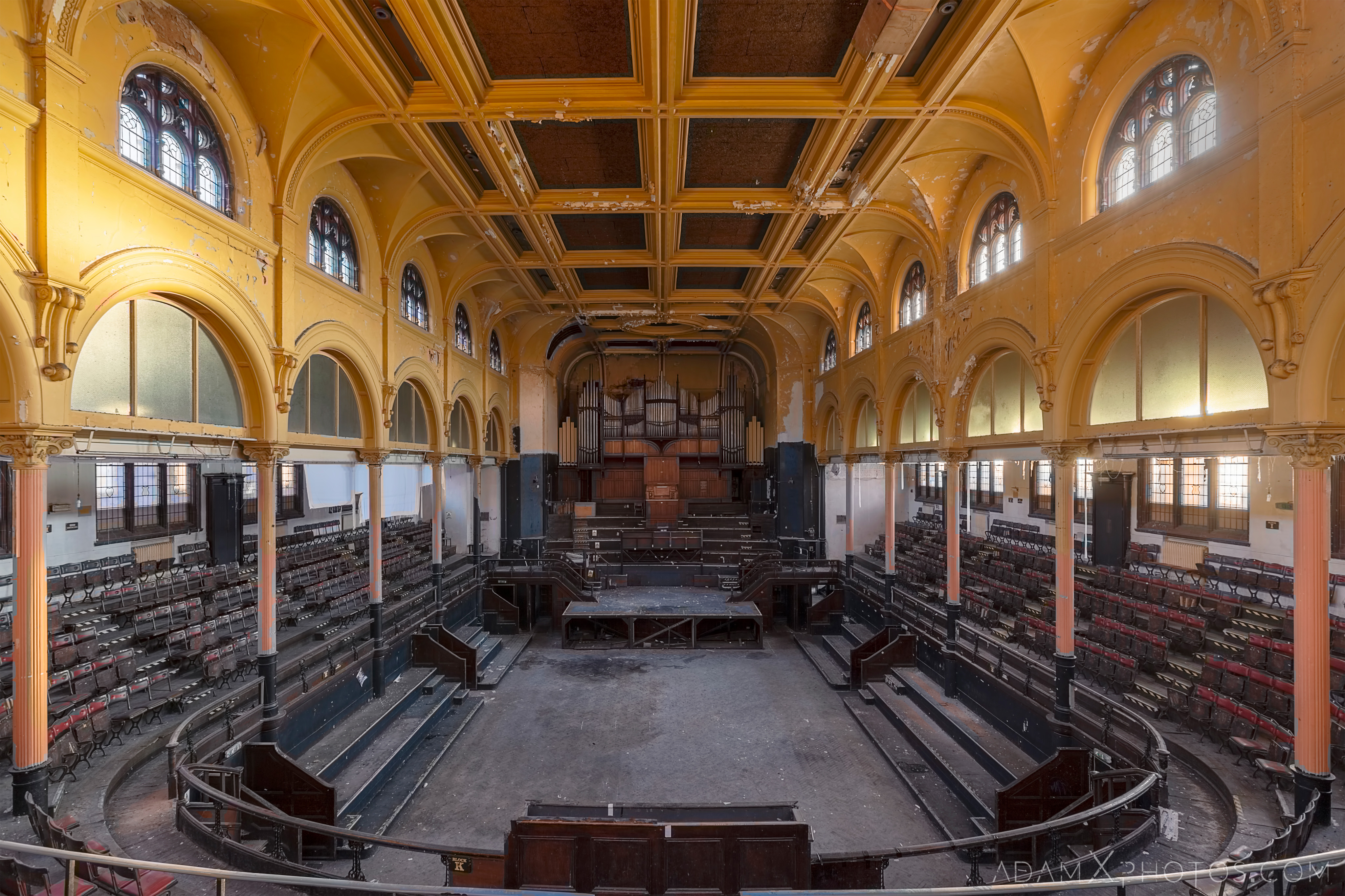 Firstly, sorry for the long delay since I posted my last report. It’s been due to a combination of being busy with the day job, non-urbex holidays, and a slowly dying mac which I’ve only just managed to resurrect. I hope to be clearing through a lot of my backlog of reports over the next few weeks and months, so if you haven’t already subscribed for updates please feel free to do so.

Explore #1 of the ‘North of The Wall’ Tour

Day One
After quite a few exploring weekends on the continent, I decided that it would be good to explore some locations a bit closer to home so Mark, Tim and I decided to focus on Bonny Scotland. Unfortunately, living in Norfolk means that Scotland is pretty much just as far away in terms of driving time as France or Belgium!

Anyway, let me crack on with the rather excellent first location of our tour – a huge derelict Methodist Hall with a colourful recent history…

History
The Grade II* listed Methodist Central Hall in Birmingham was constructed between 1903 and 1904, with seating in the main hall for 2,000 worshippers, and more than 30 other rooms including three school halls. It was constructed with red brick, and faced with terracotta produced by the renowned firm of Gibbs and Canning Limited of Tamworth, which also produced decorative works for the interior of the Victoria Law Courts in Birmingham and the Natural History Museum in London. 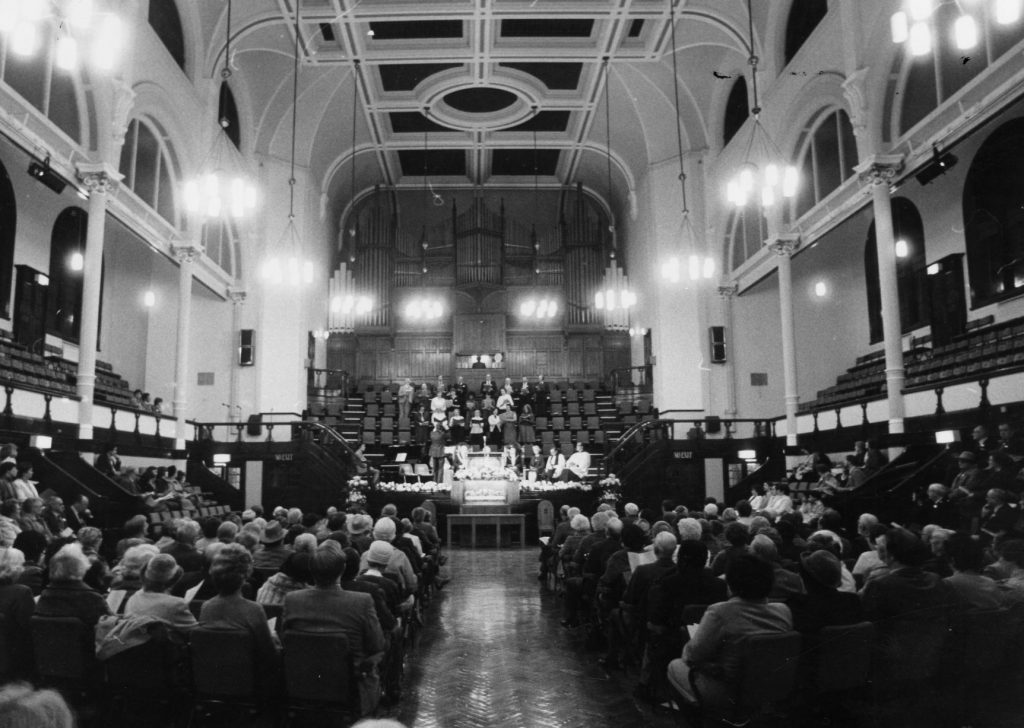 The building was also used as a nightclub known as the Q Club between 1991-2002 and a second incarnation between 2007-2011, during which times there were three reported deaths – someone jumping off the tower in 1998, a drugs overdose in 2000, and a stabbing outside in 2008.

Since 2011 the site has lain disused and falling into decay, particularly in the uppermost sections, leading to a listing in Historic England’s ‘Heritage at Risk’ register.

In 2018 planning permission was granted to Ciel Capital to convert it into a 147 room hotel, 75 room apart hotel, and ‘gastro hall’ at an estimated cost of £35 million, with works expected to be completed by 2020. 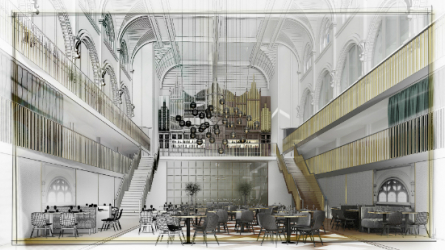 Our Explore
My long-time exploring buddy James couldn’t make the Scottish leg of the trip, but didn’t want to miss out on seeing this location – so the plan was that we would drive up from Norwich and he would get a train home later than day, via some other architecturally interesting spots in London. Up at 2am, I hit a major snag when I pulled up outside James’ house and discovered that my ailing car wouldn’t switch off from full beam headlights! Cue about half an hour of us cursing in the dark, and eventually managing to remove a fuse which disabled the full beam lights. Hardly an ideal start to the weekend, but we made our way up to Birmingham without any further incident, and soon found our way inside the building just as dawn was breaking. We met up with Tim and another explorer friend John, who I’d met on my Chernobyl trip a few years back. 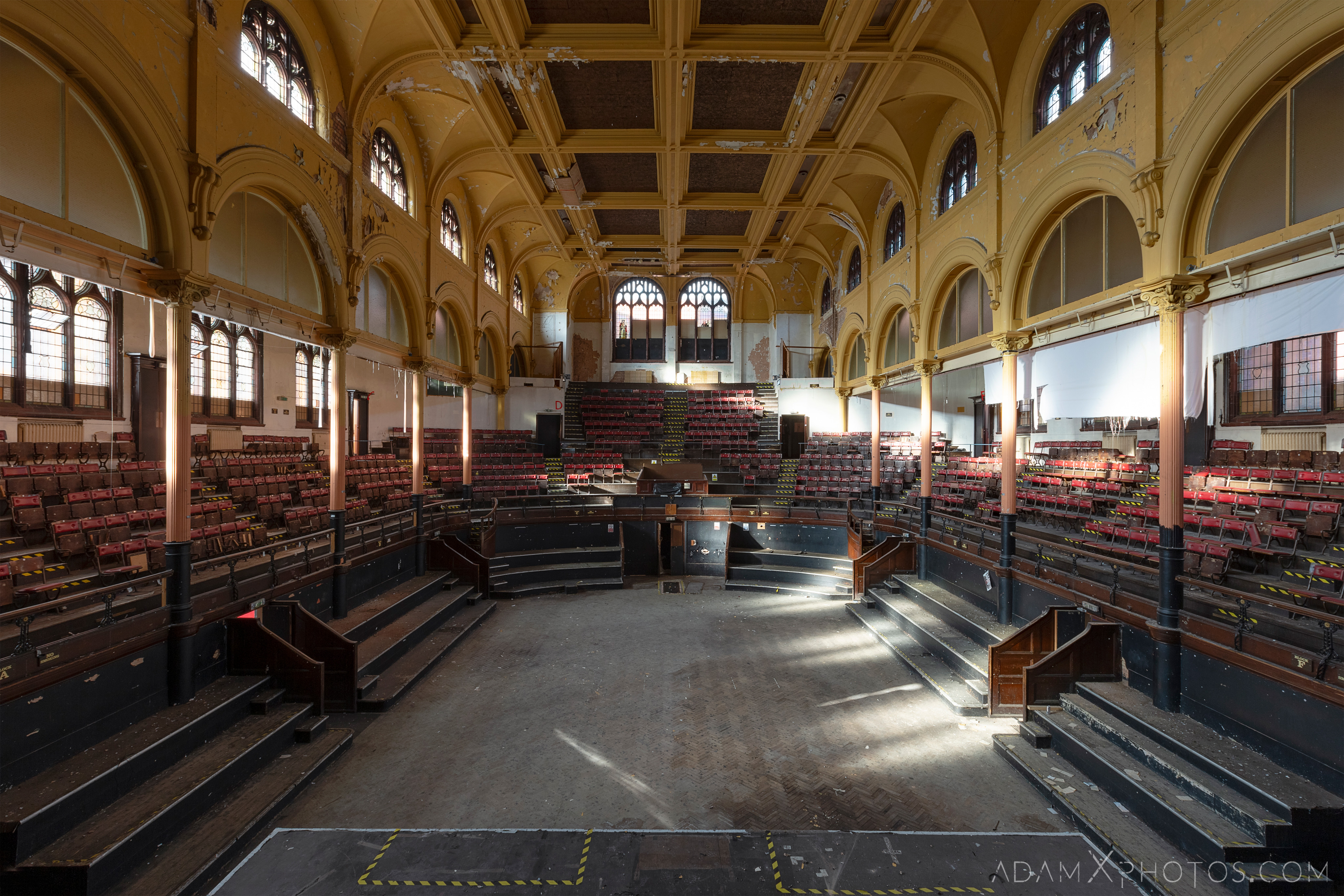 The magnificent Central Hall, viewed from the stage/organ end. 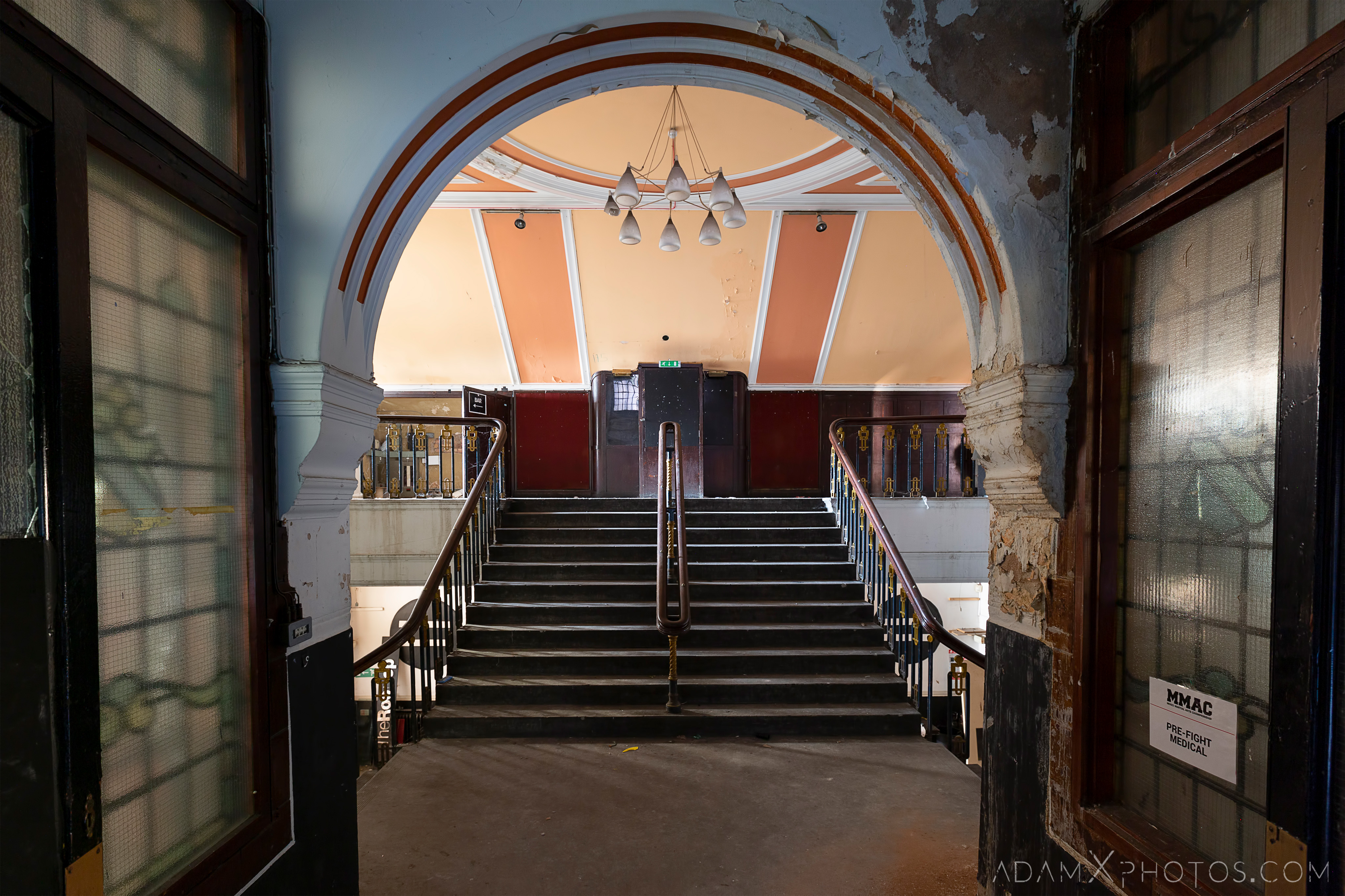 Entrance to the lobby/foyer area, which joins the Central Hall to the rooms in the rest of the building. 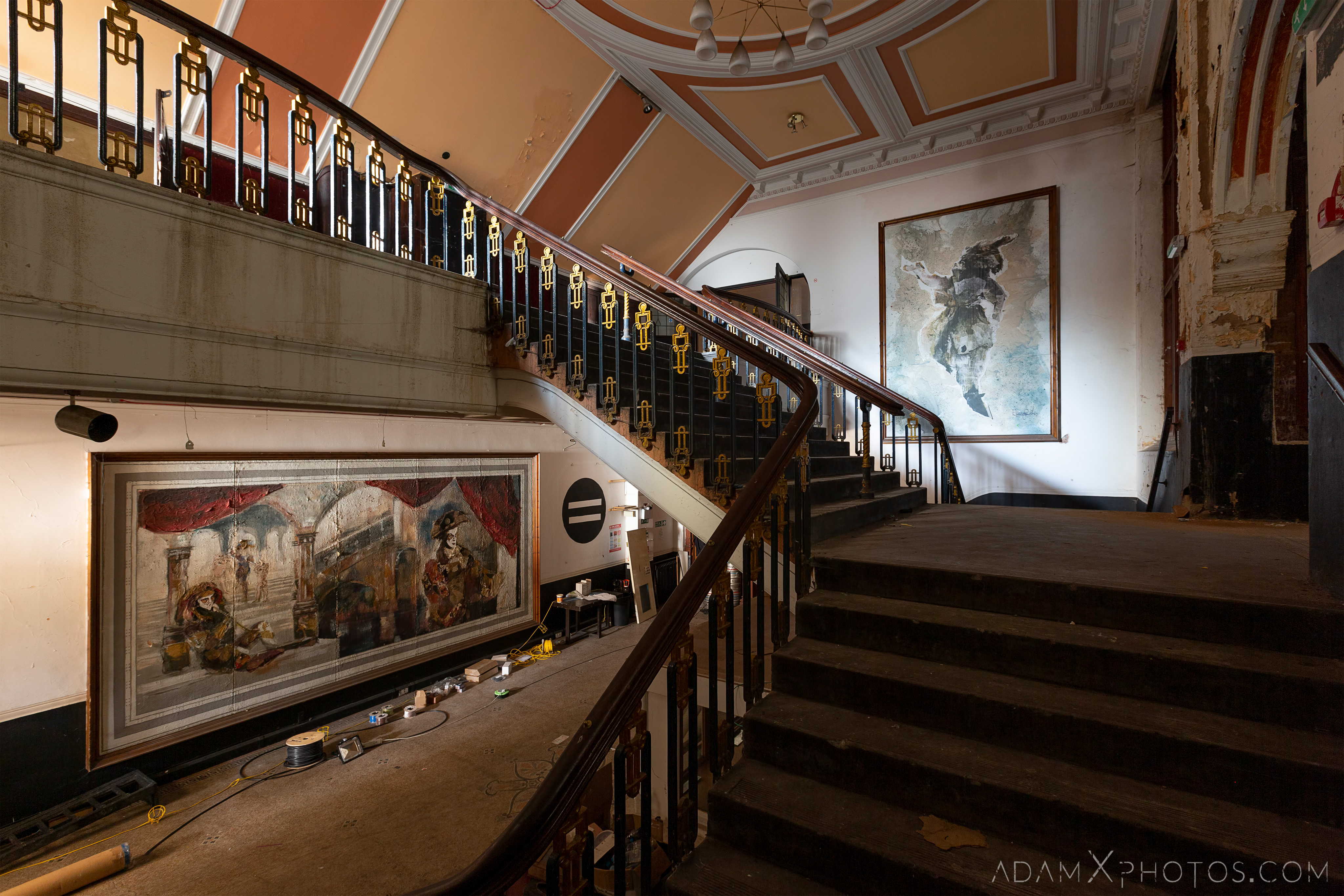 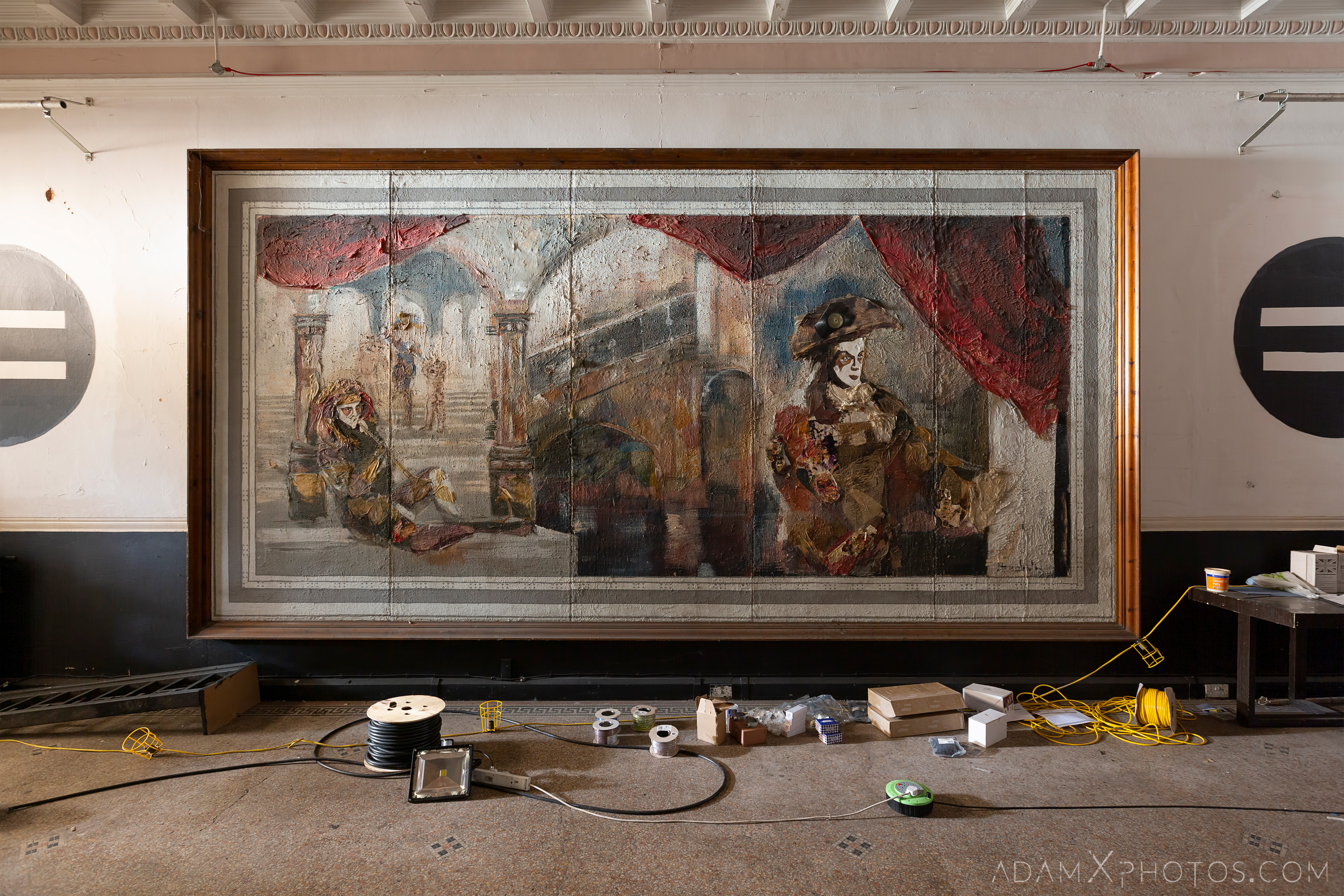 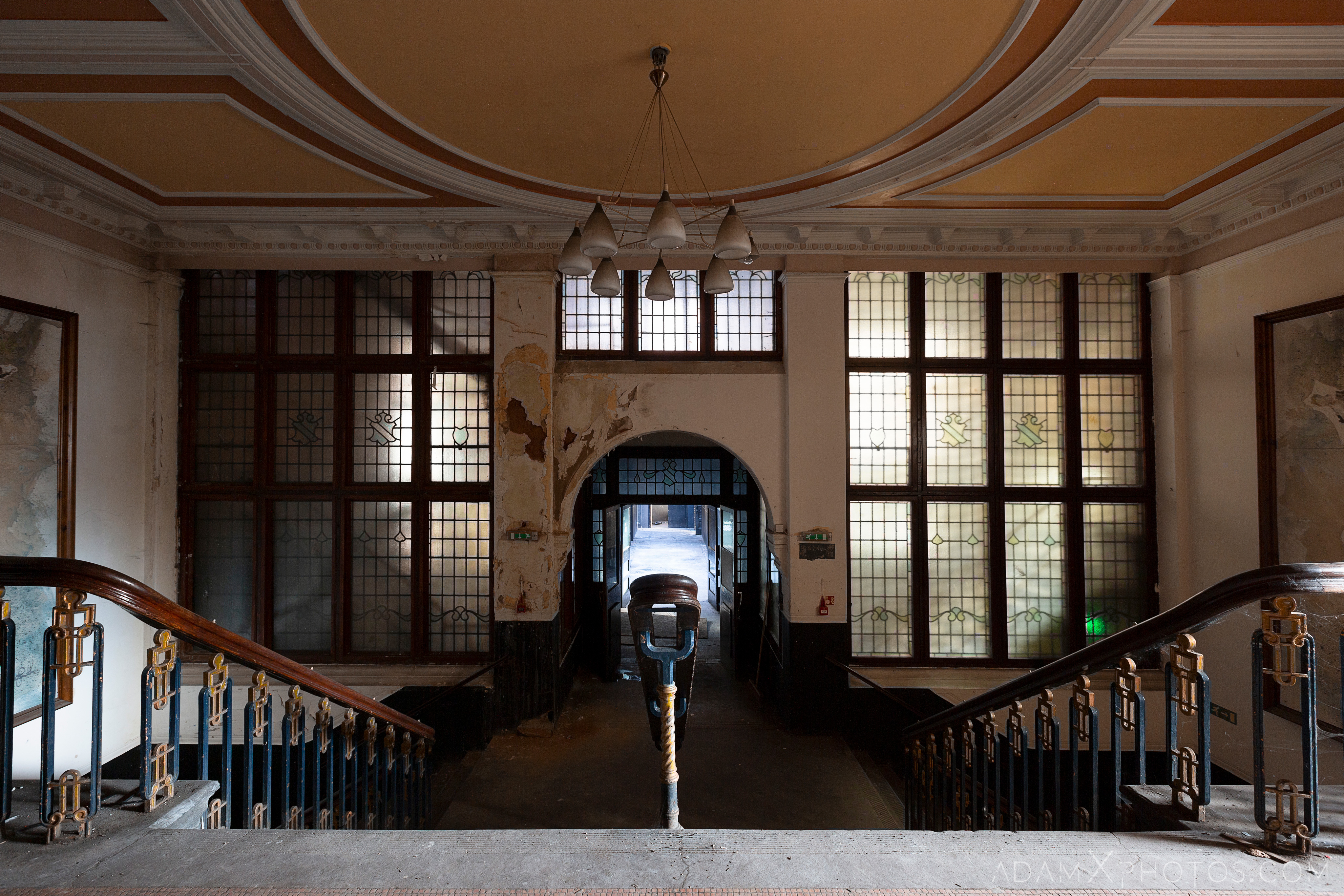 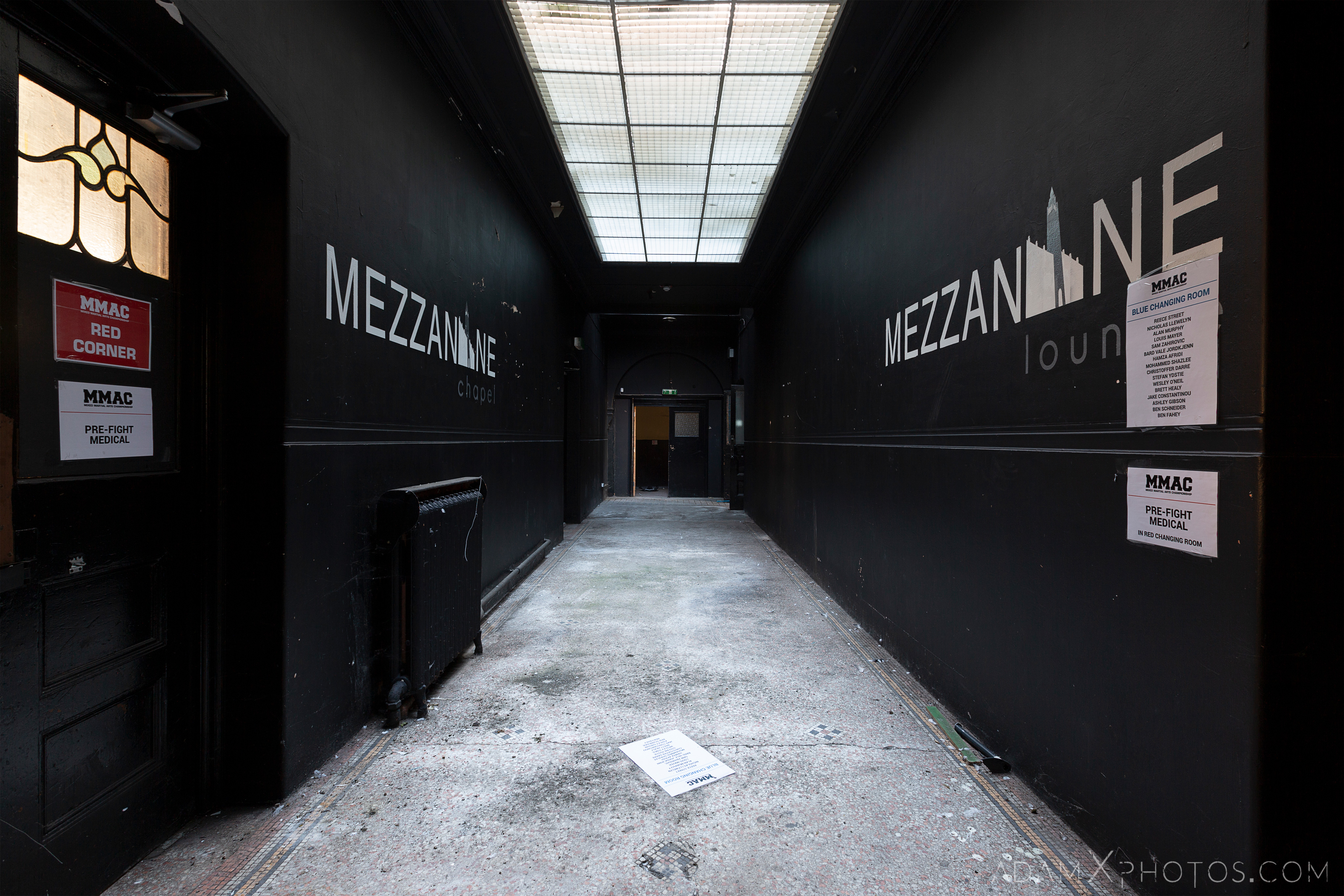 The last use of this area before closure was as the dressings rooms for Mixed Martial Arts Championship bouts (which I presume were held in the Central Hall) – random! 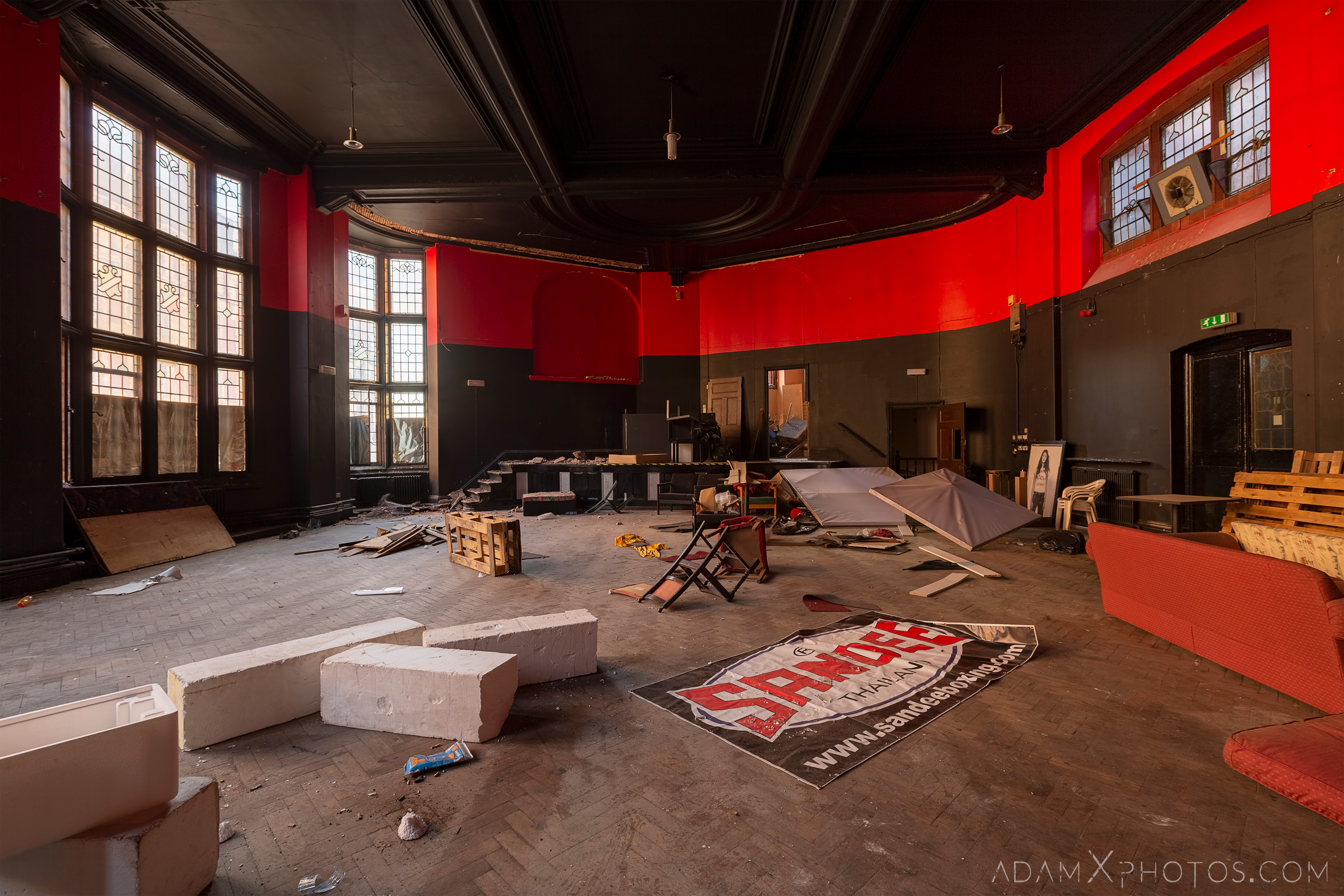 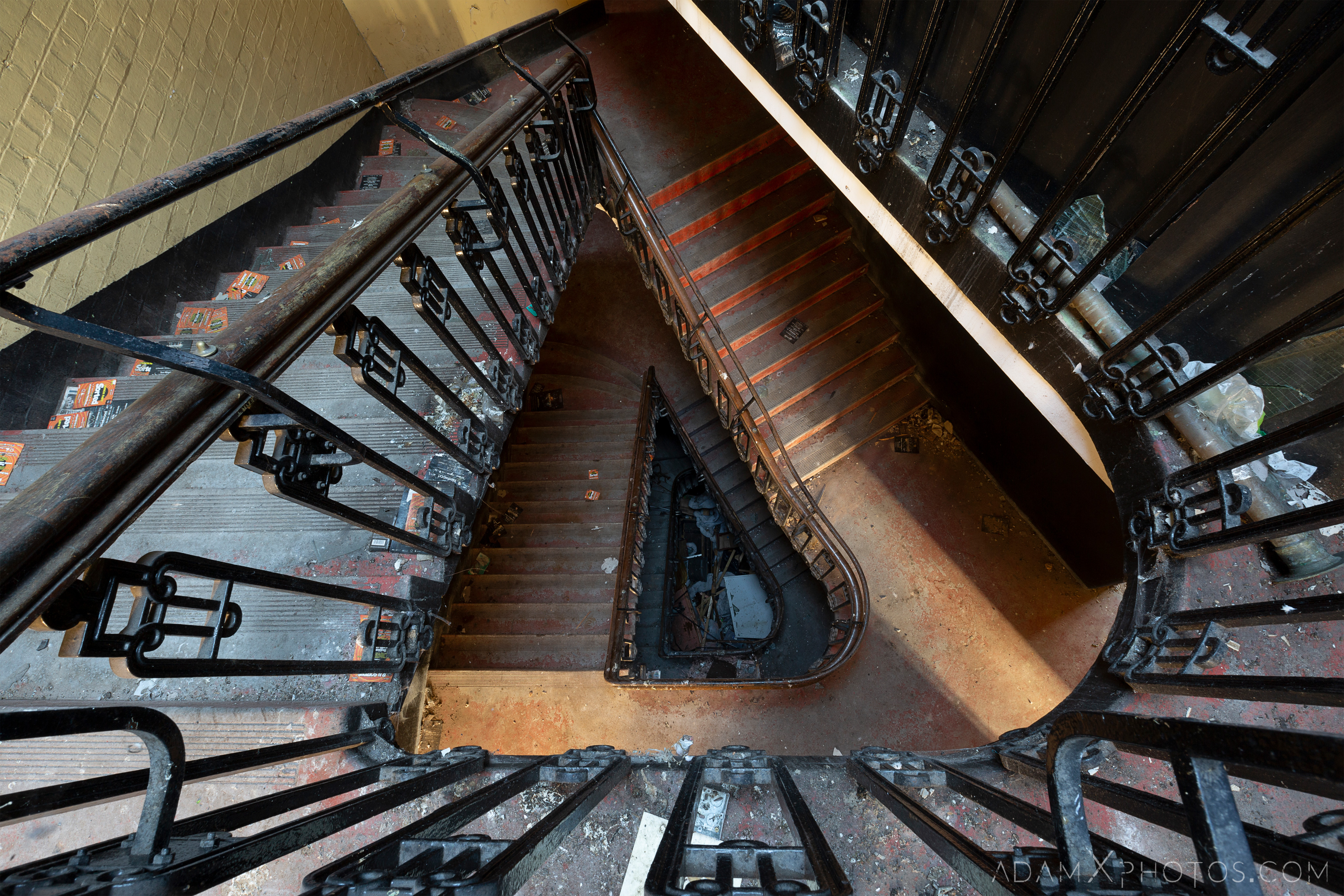 A rather photogenic staircase at one end of the building… 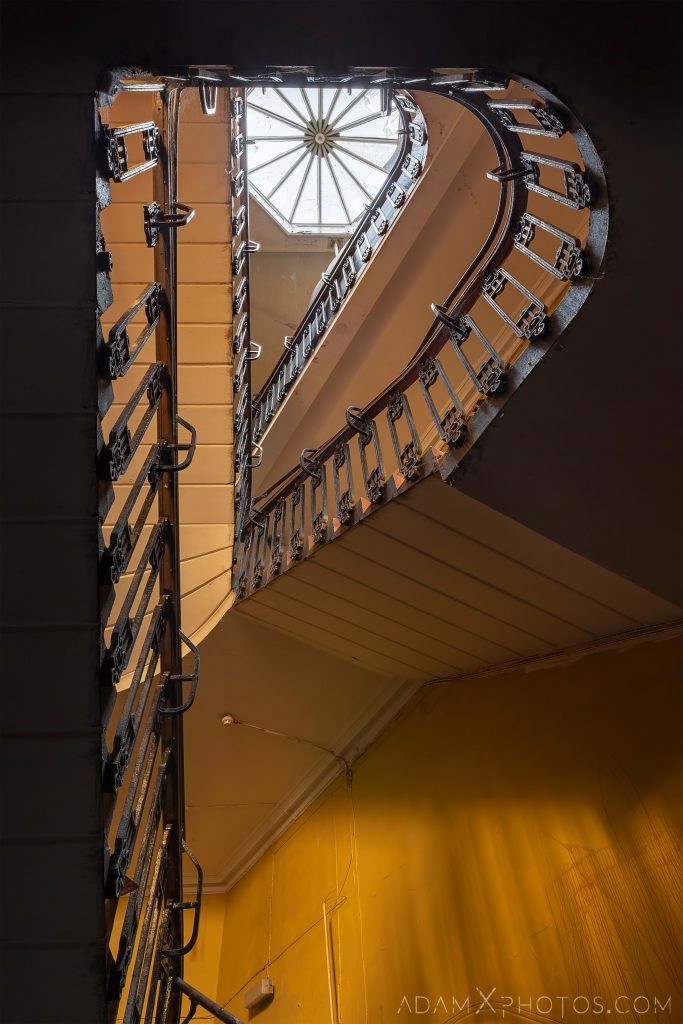 …whilst crouching down in the basement to take this shot, a rat the size of a small cat casually lolloped past me on the stairs! :O

I then made my way back to the Central Hall to grab a quick shot of the Organ, and the Hall from that end.

…I would love to have stayed for a few hours longer, but Tim and I had a rendezvous with Mark up North and sites to explore in Scotland that afternoon, so we said our farewells to John and James and hit the road.

Thanks as always for coming by.
Adam X