After exploring the Houses of Culture, we then took the long hairpin Russian military highway north towards the Russian border. Our destination was the beautiful mountain-top Gergeti Trinity Church, and this post shares my photos from there and a few other locations we stopped at along the way…

We began our journey by taking a more interesting ‘cross country’ route, which involved unpaved roads in varying degrees of disrepair… 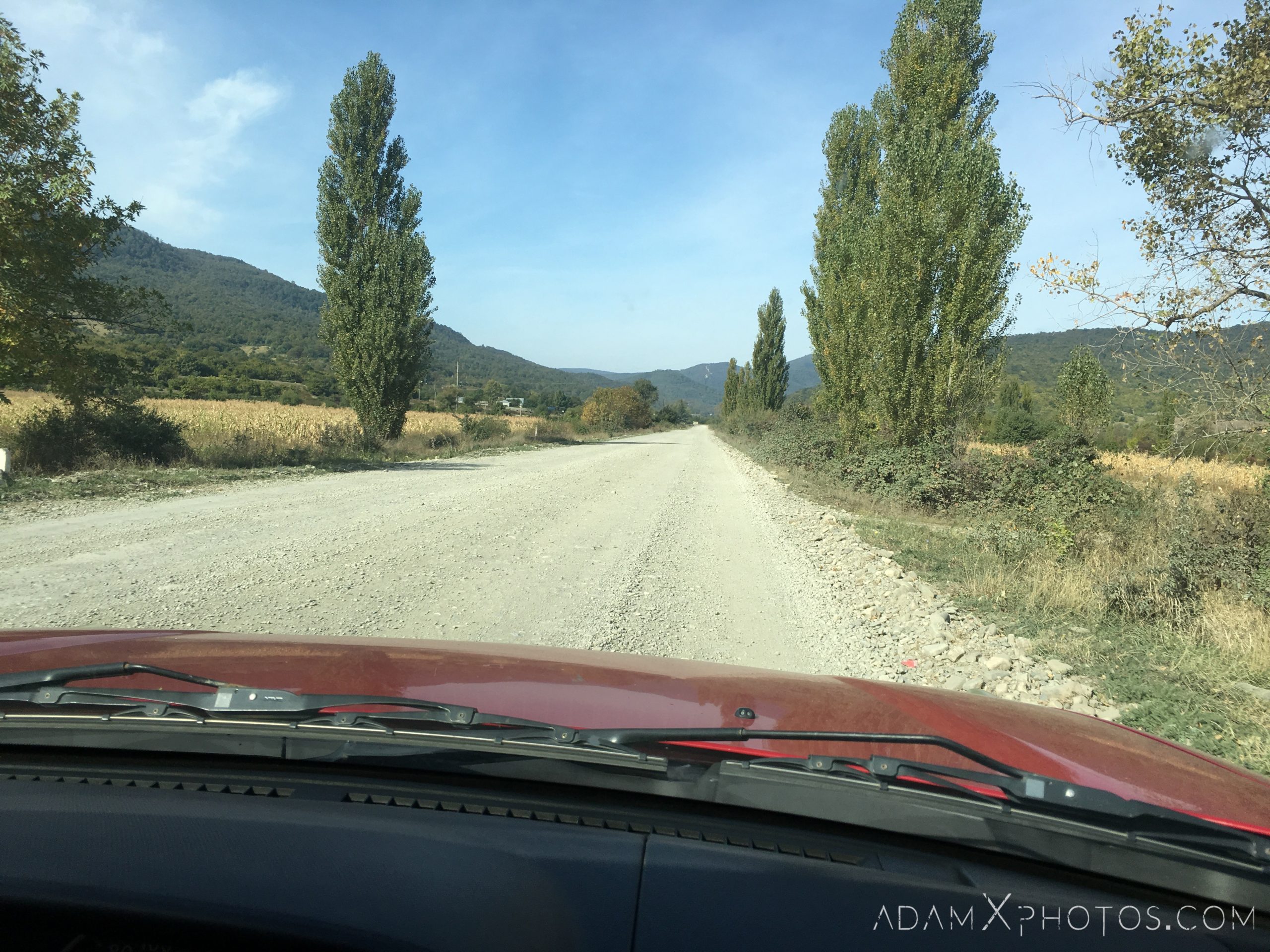 …spotting a potential site of interest on google maps, we turned up a small mountain road to find this beautiful abandoned church. It was one of those locations where having a drone really enabled its architecture and location to be fully appreciated…

Kvetera Church is a Georgian Orthodox church in a historic fortified town of Kvetera in Kakheti. Built in the early part of the 10th century, it is relatively small and features the Georgian cross-dome style of architecture. The dome rests on a round tympanum and rises over the central square pace. The Projections end in an apse, which have niches between them. The facade of the church is not designed with many ornaments which is typical for Kakhetian churches. Most of the facade is decorated with symmetrical arches. The town of Kvetera is thought to date back to at least the 8th century AD. 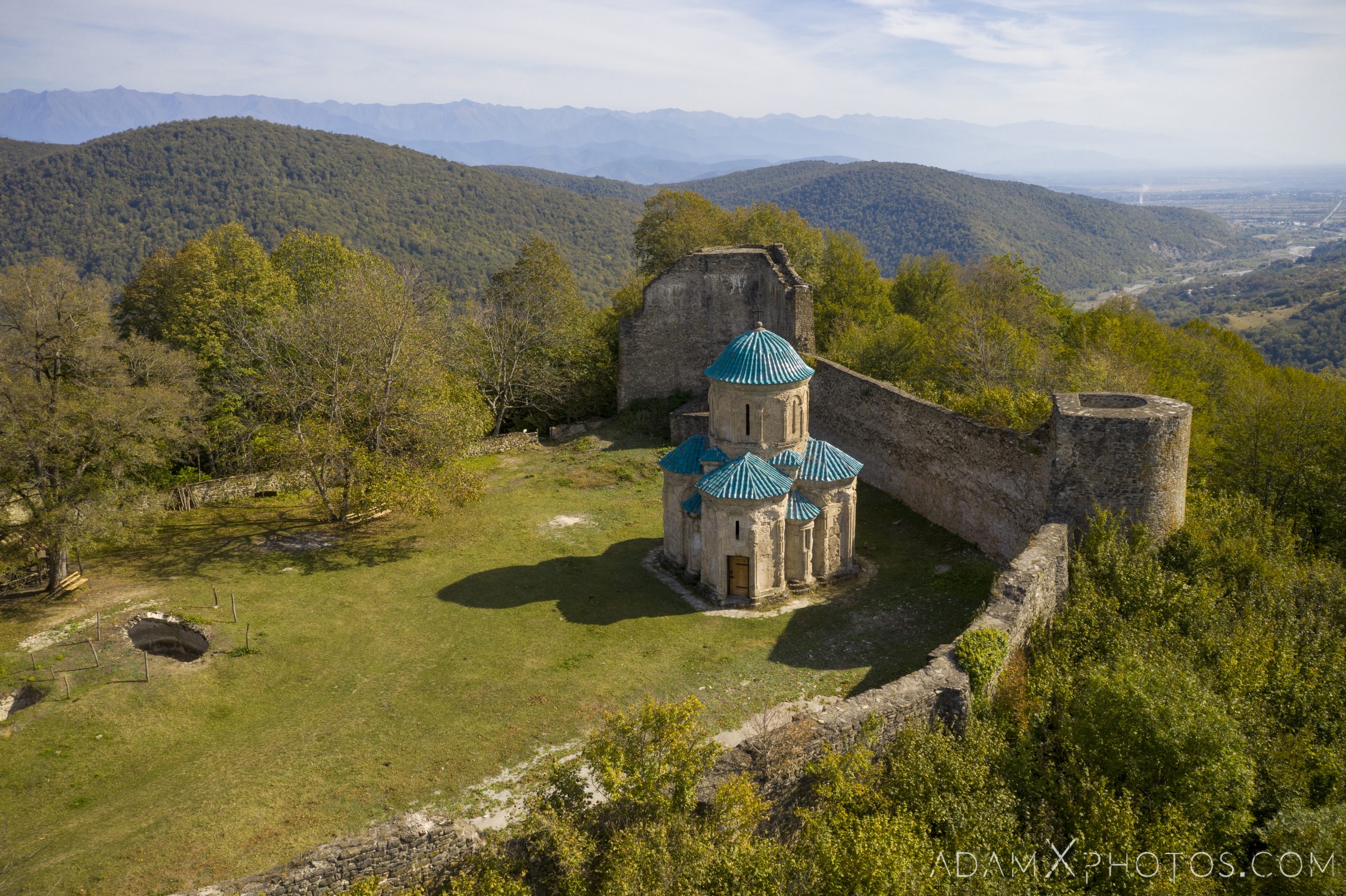 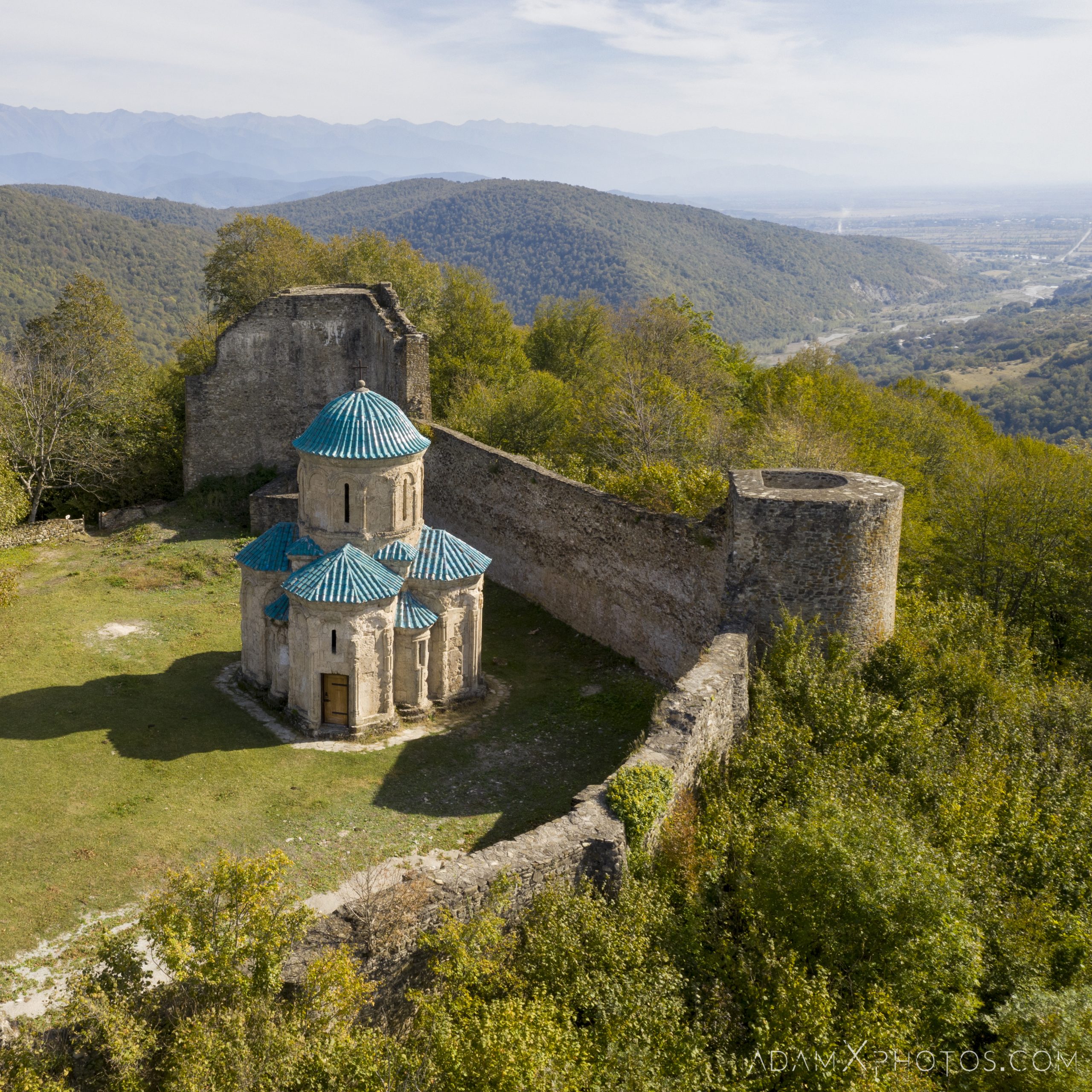 We then joined the Russian-military highway, featuring never ending bends, trucks, and cows… …we also stopped at a roadside stall, and couldn’t resist this touristy photo op, at which the tour’s ‘Love Bears’ name was christened! The Russia–Georgia Friendship Monument or Treaty of Georgievsk Monument is a monument built in 1983 to celebrate the bicentennial of the Treaty of Georgievsk and the ongoing friendship between Soviet Georgia and Soviet Russia. Located on the Georgian Military Highway between the ski resort town of Gudauri and the Jvari pass, the monument is a large round stone and concrete structure overlooking the Devil’s Valley in the Caucasus mountains. Inside the monument is a large tile mural that spans the whole circumference of the structure and depicts scenes of Georgian and Russian history. 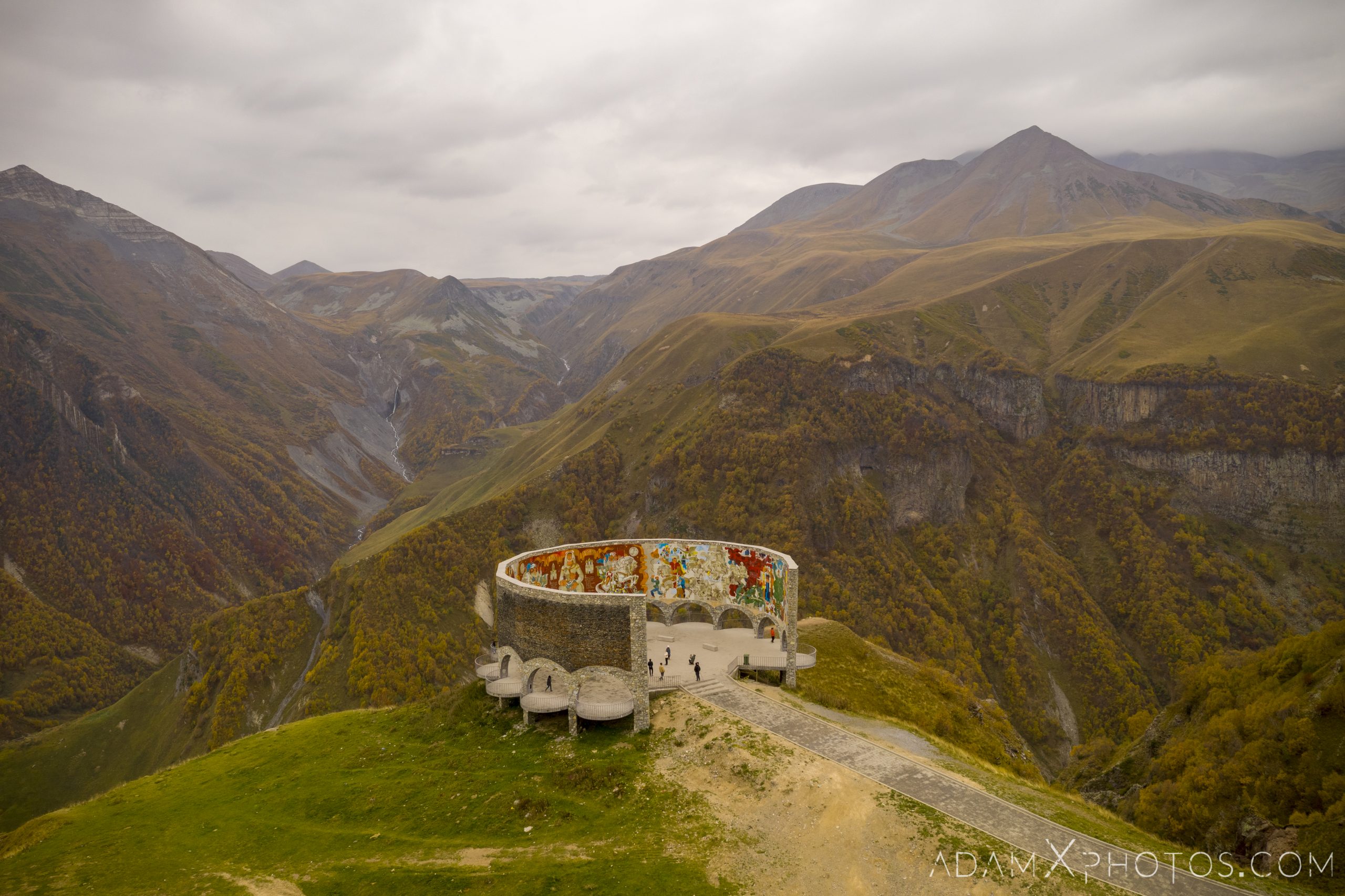 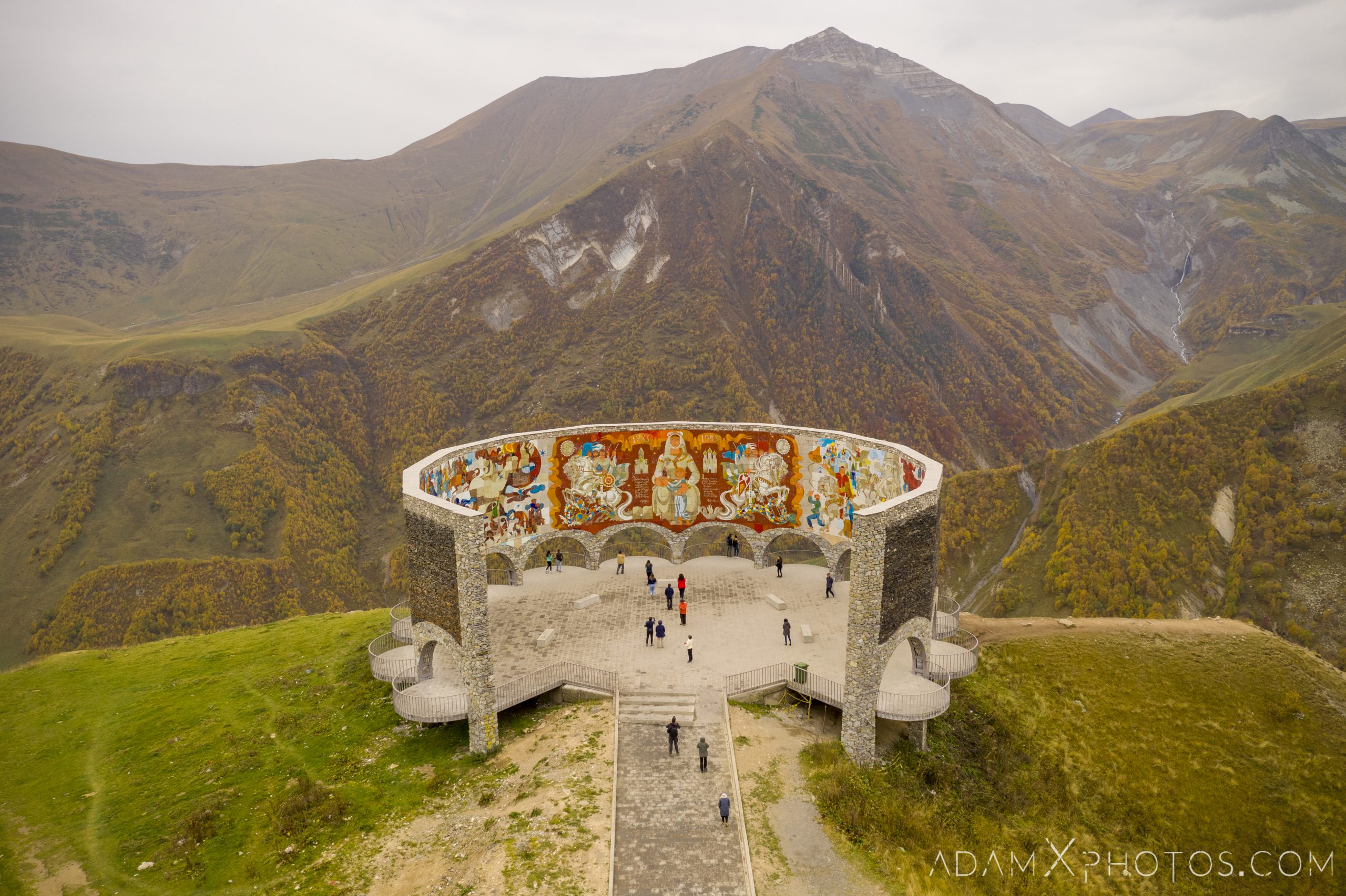 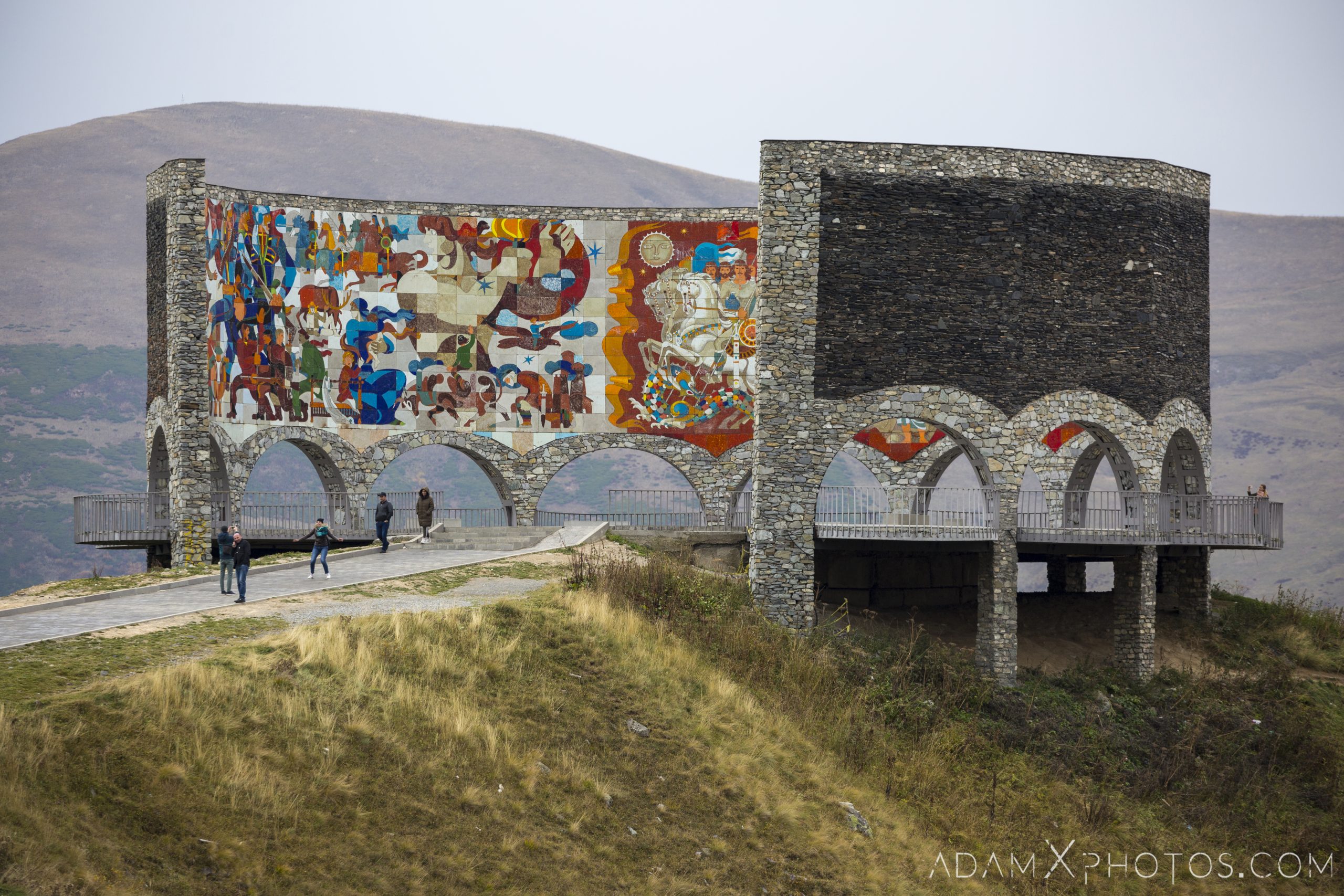 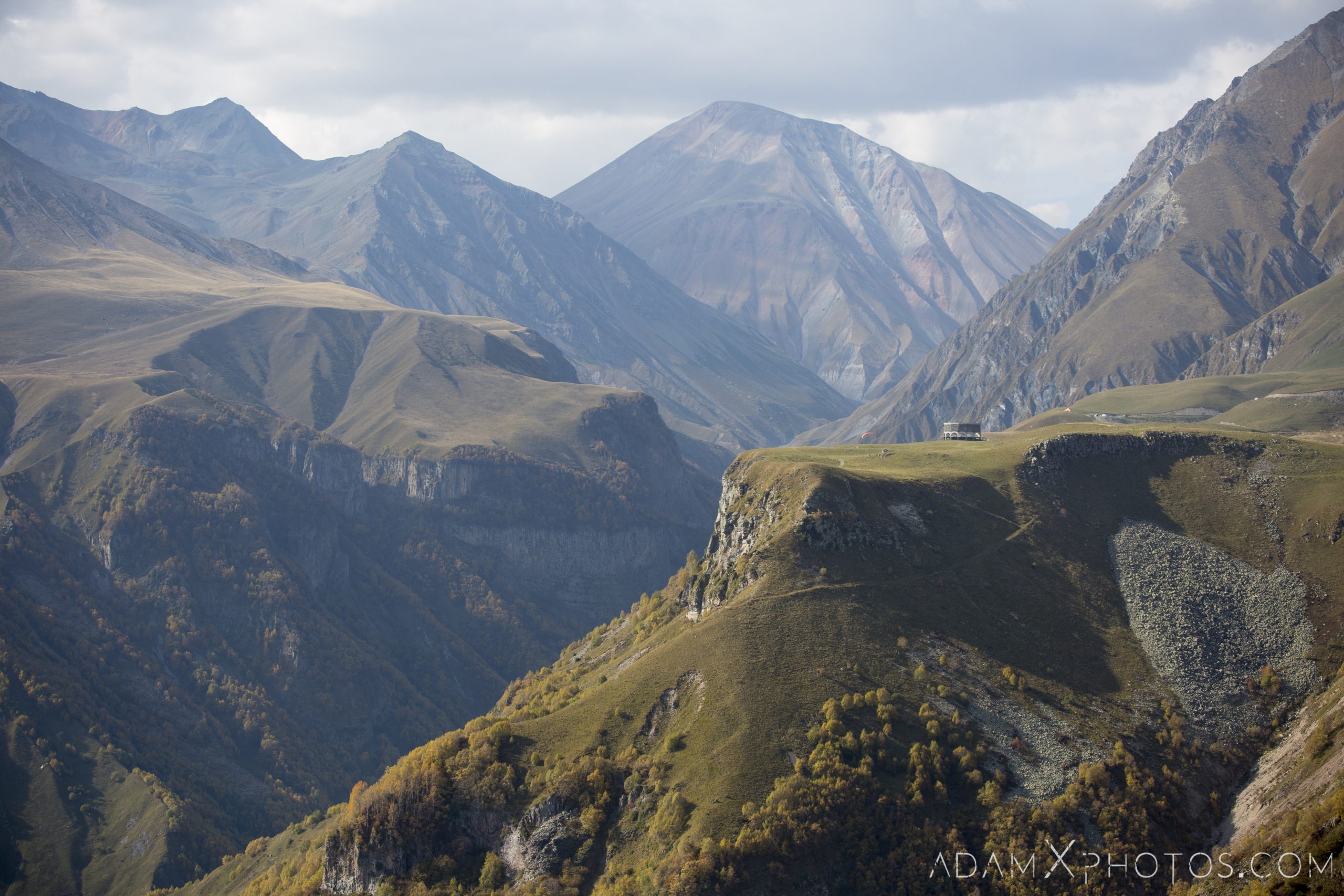 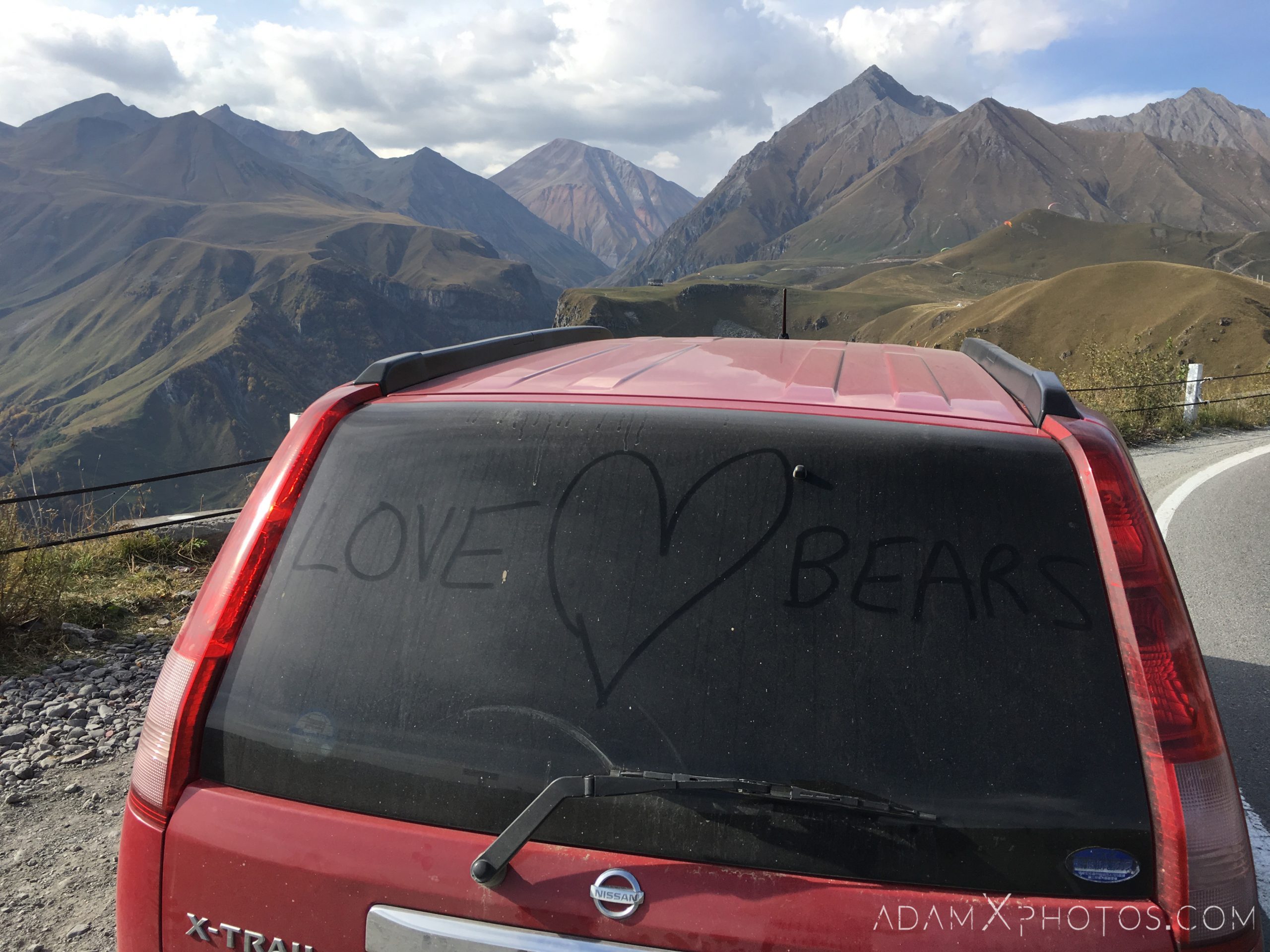 After a long and tiring day of driving we finally reached our destination, but not before navigating the final couple of miles of broken unpaved road to get there! 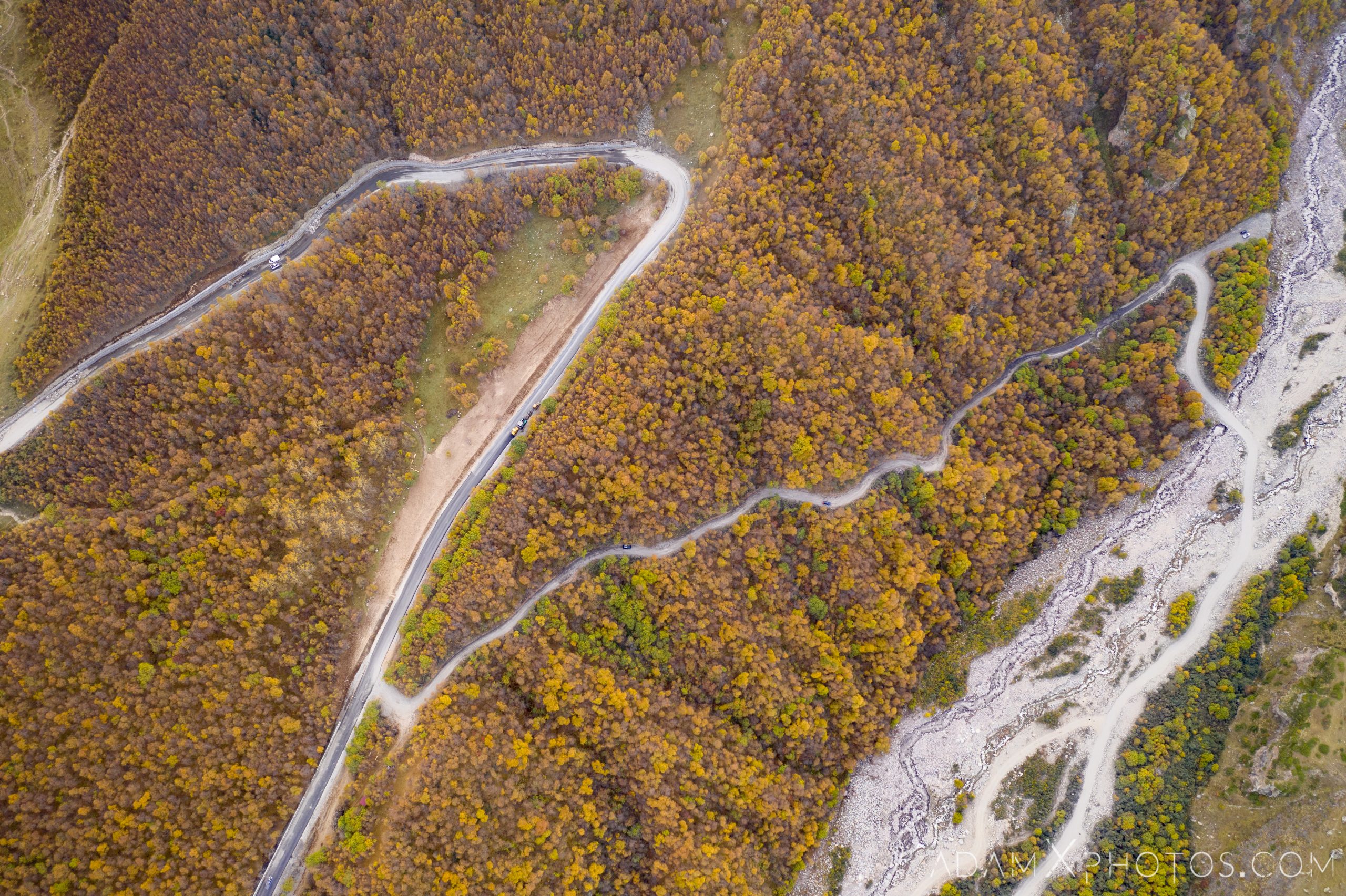 The following shots are a mixture of those taken during what turned out to be a very boring (coloured) sunset, and equally unimpressive sunrise the next day. Still, a stunning location and well worth the road trip to reach it…

Gergeti Trinity Church is a popular name for Holy Trinity Church near the village of Gergeti in Georgia. The church is situated on the right bank of the river Chkheri (the left tributary of the river Terek), at an elevation of 2170 meters (7120 feet), under Mount Kazbek. It was built in the 14th century, and is the only cross-cupola church in Khevi province. The separate belltower dates from the same period as the church itself. Its isolated location on top of a steep mountain surrounded by the vastness of nature has made it a symbol for Georgia. The 18th century Georgian author Vakhushti Batonishvili wrote that in times of danger, precious relics from Mtskheta, including Saint Nino’s Cross were brought here for safekeeping. During the Soviet era, all religious services were prohibited, but the church remained a popular tourist destination. The church is now an active establishment of the Georgian Orthodox and Apostolic Church. 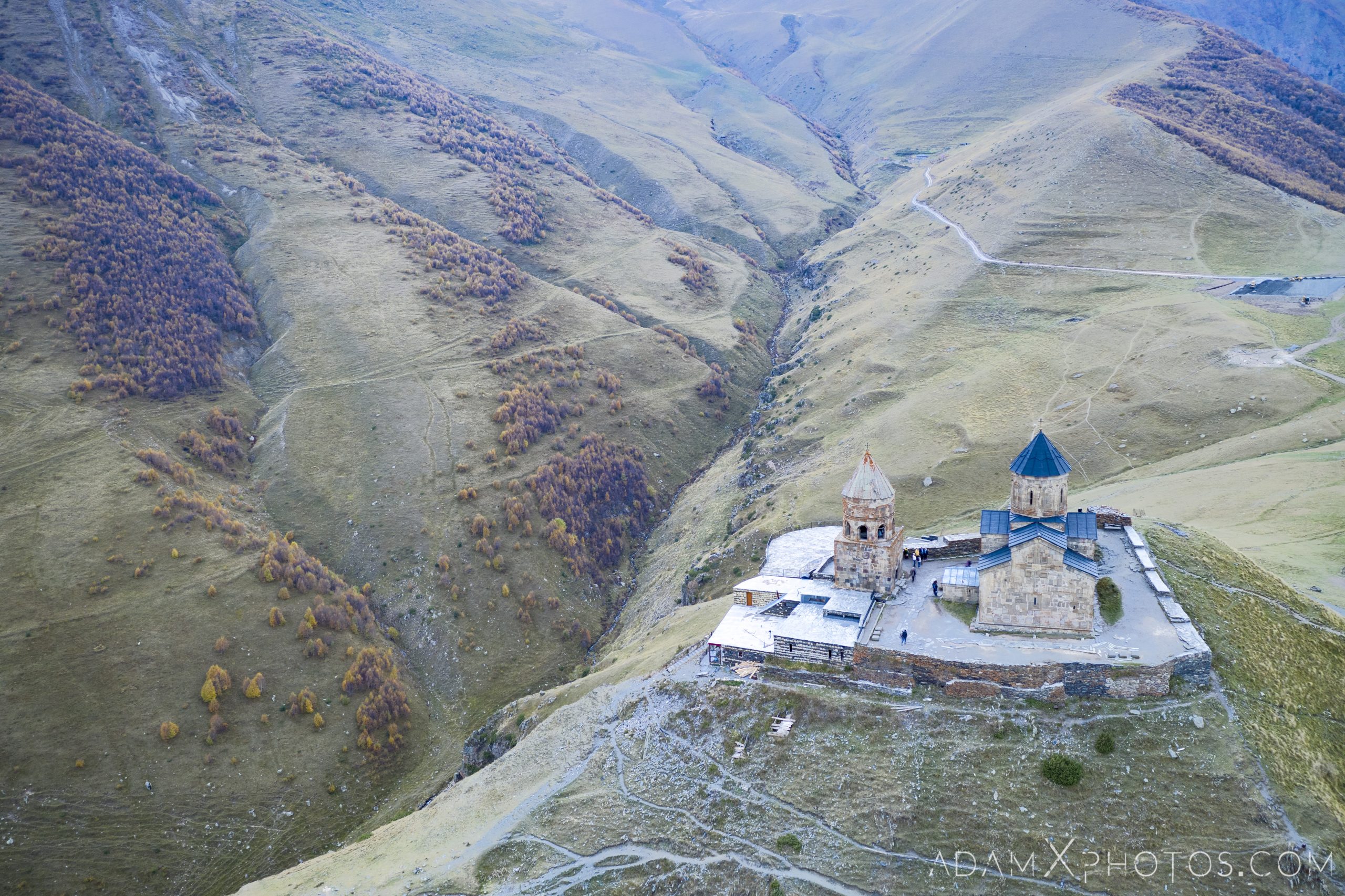 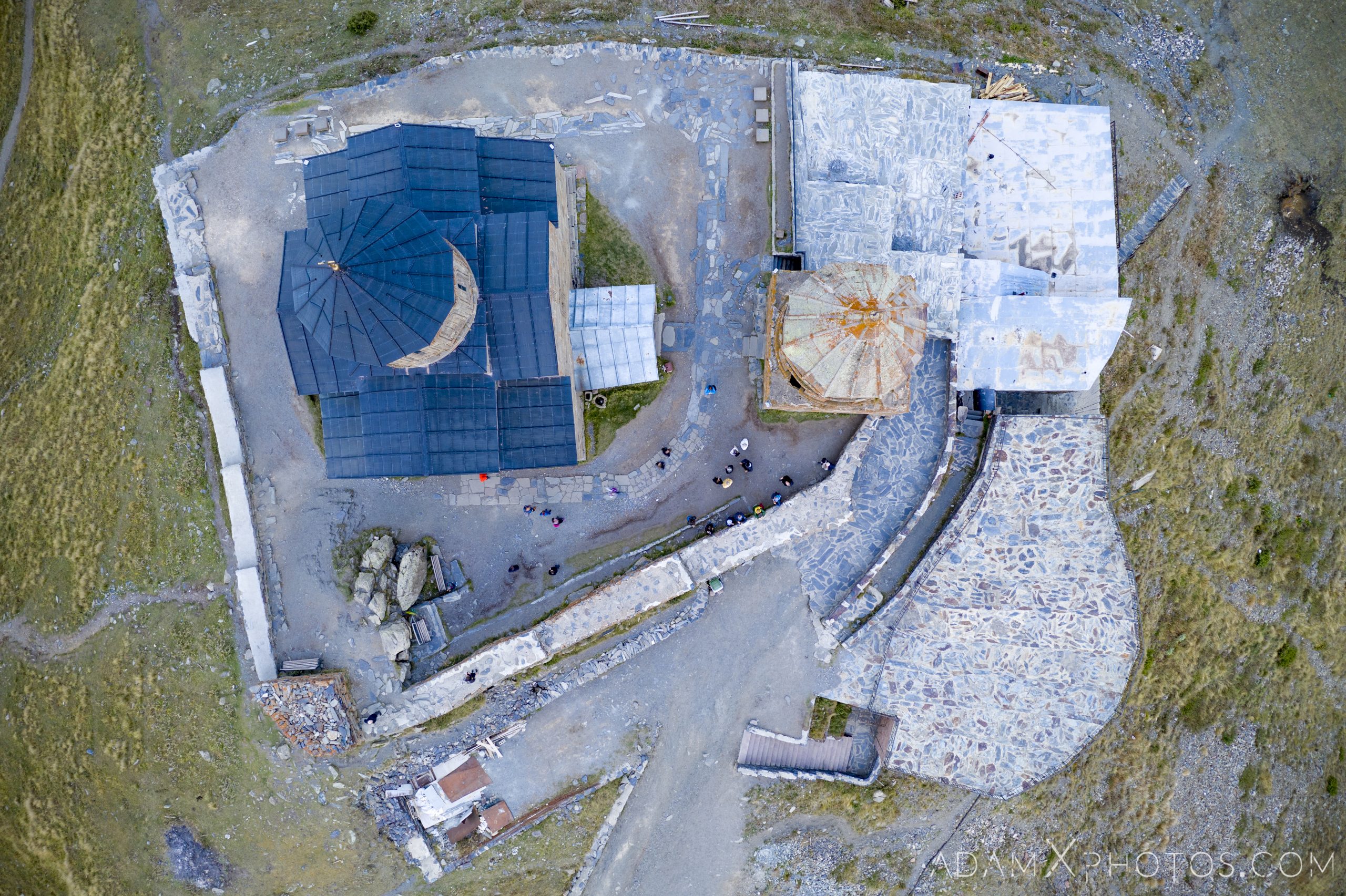 We then headed back down from the mountains, stopping at…

Ananuri was a castle and seat of the eristavis (Dukes) of Aragvi, a feudal dynasty which ruled the area from the 13th century. The castle was the scene of numerous battles.

In 1739, Ananuri was attacked by forces from a rival duchy, commanded by Shanshe of Ksani and was set on fire. The Aragvi clan was massacred. However, four years later, the local peasants revolted against rule by the Shanshe, killing the usurpers and inviting King Teimuraz II to rule directly over them. However, in 1746, King Teimuraz was forced to suppress another peasant uprising, with the help of King Erekle II of Kakheti. The fortress remained in use until the beginning of the 19th century. In 2007, the complex has been on the tentative list for inclusion into the UNESCO World Heritage Site program.

When the castle was under siege, it was not defeated because a secret tunnel led to the water and thus provided a way to get food and water to the people who had taken refuge in the castle. The enemy finally captured a woman named Ana, who was from Nuri, and tortured her to reveal the location of the tunnel. But she chose to die rather than giving the secret away. Hence the castle was called Ananuri, and she became a legend.

The fortifications consist of two castles joined by a crenellated curtain wall. The upper fortification with a large square tower, known as Sheupovari, is well preserved and is the location of the last defense of the Aragvi against the Shanshe. The lower fortification, with a round tower, is mostly in ruins.

Within the complex, amongst other buildings, are two churches. The older Church of the Virgin, which abuts a tall square tower, has the graves of some of the Dukes of Aragvi. It dates from the first half of the 17th century, and was built of brick. The interior is no longer decorated.

The larger Church of the Mother of God (Ghvtismshobeli), built in 1689 for the son of Duke Bardzim. It is a central dome style structure with richly decorated façades, including a carved north entrance and a carved grapevine cross on the south façade. It also contains the remains of a number of frescoes, most of which were destroyed by the fire in the 18th century. 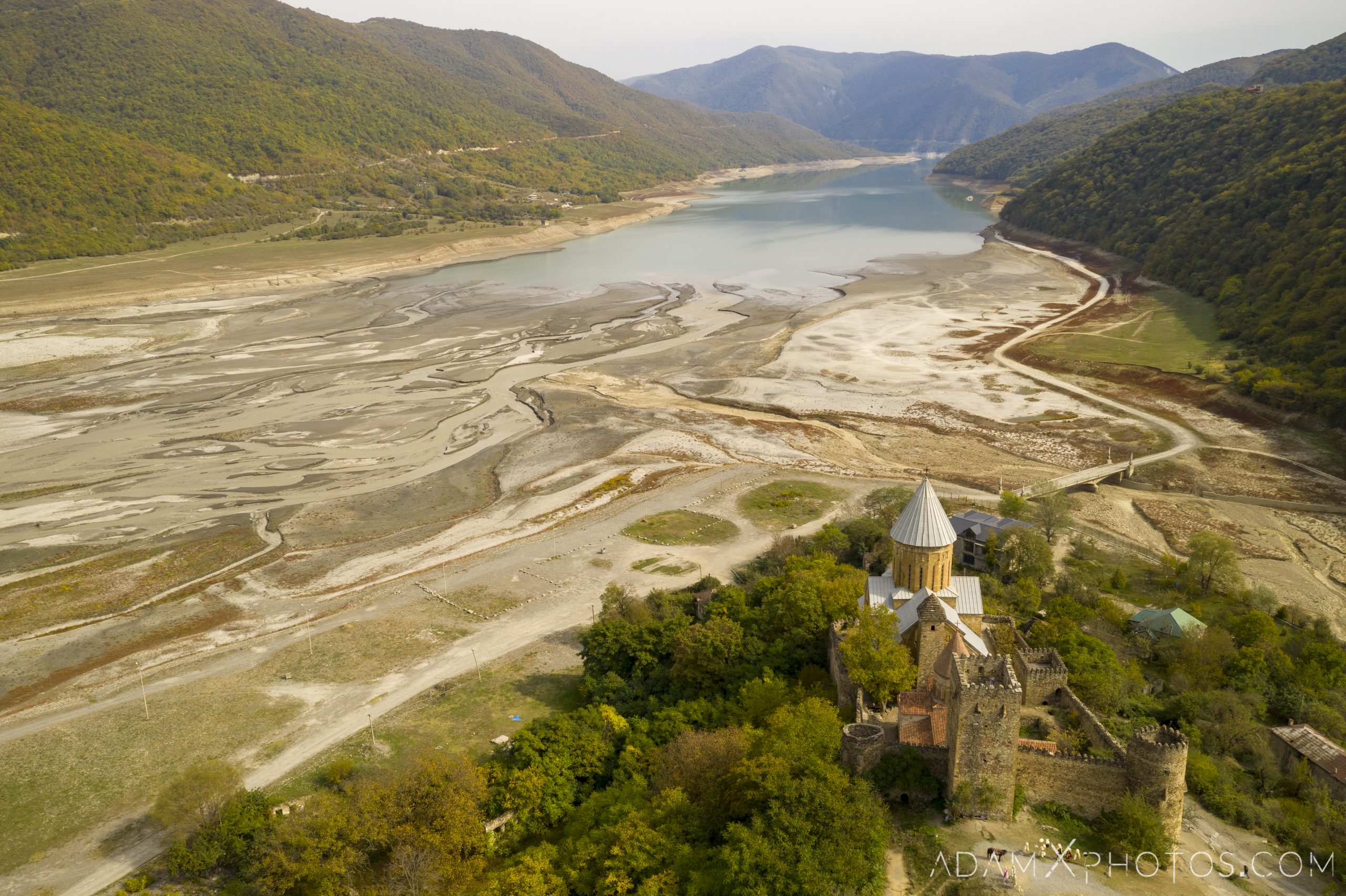 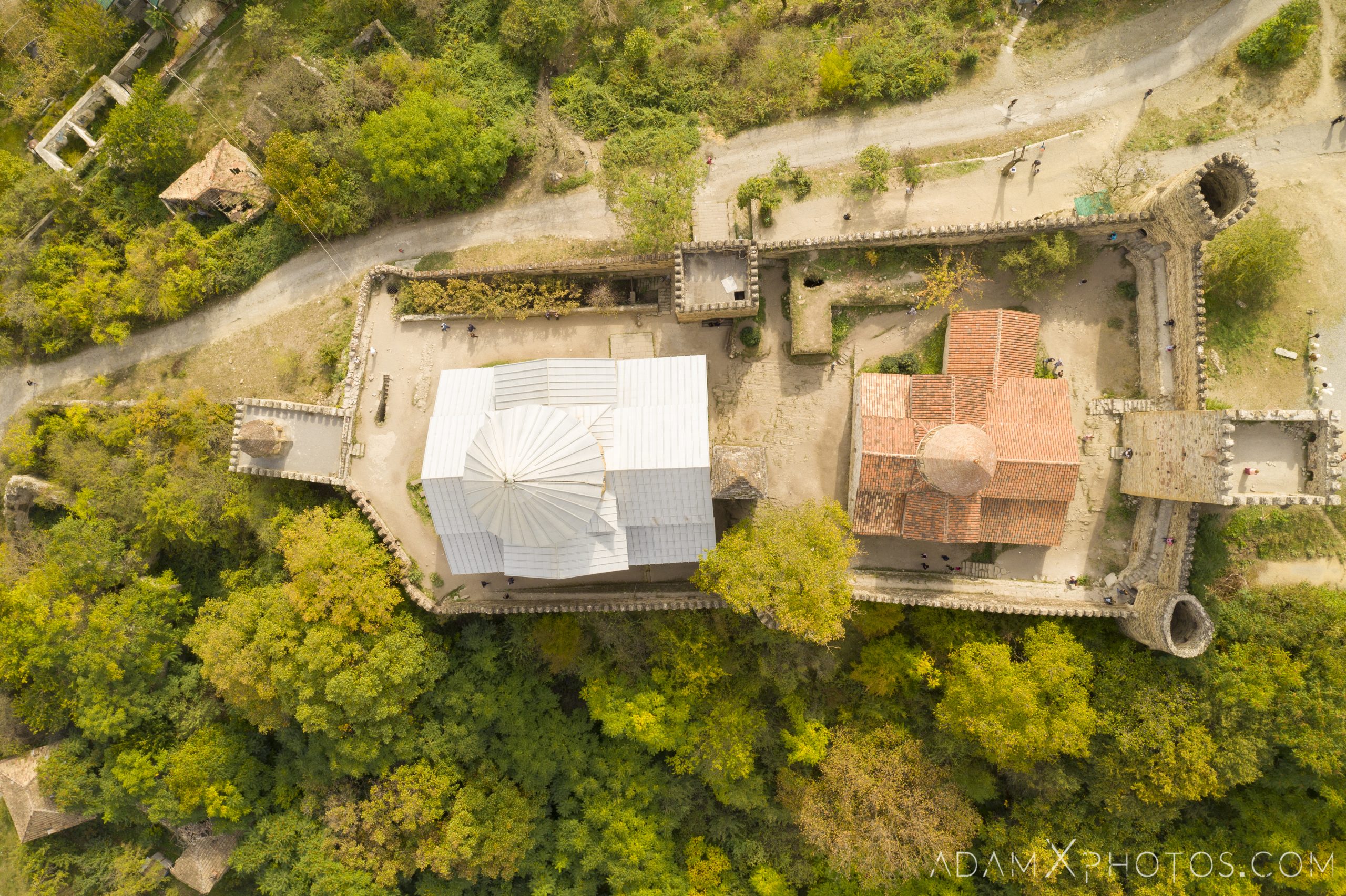 Thanks for coming along for the ride.