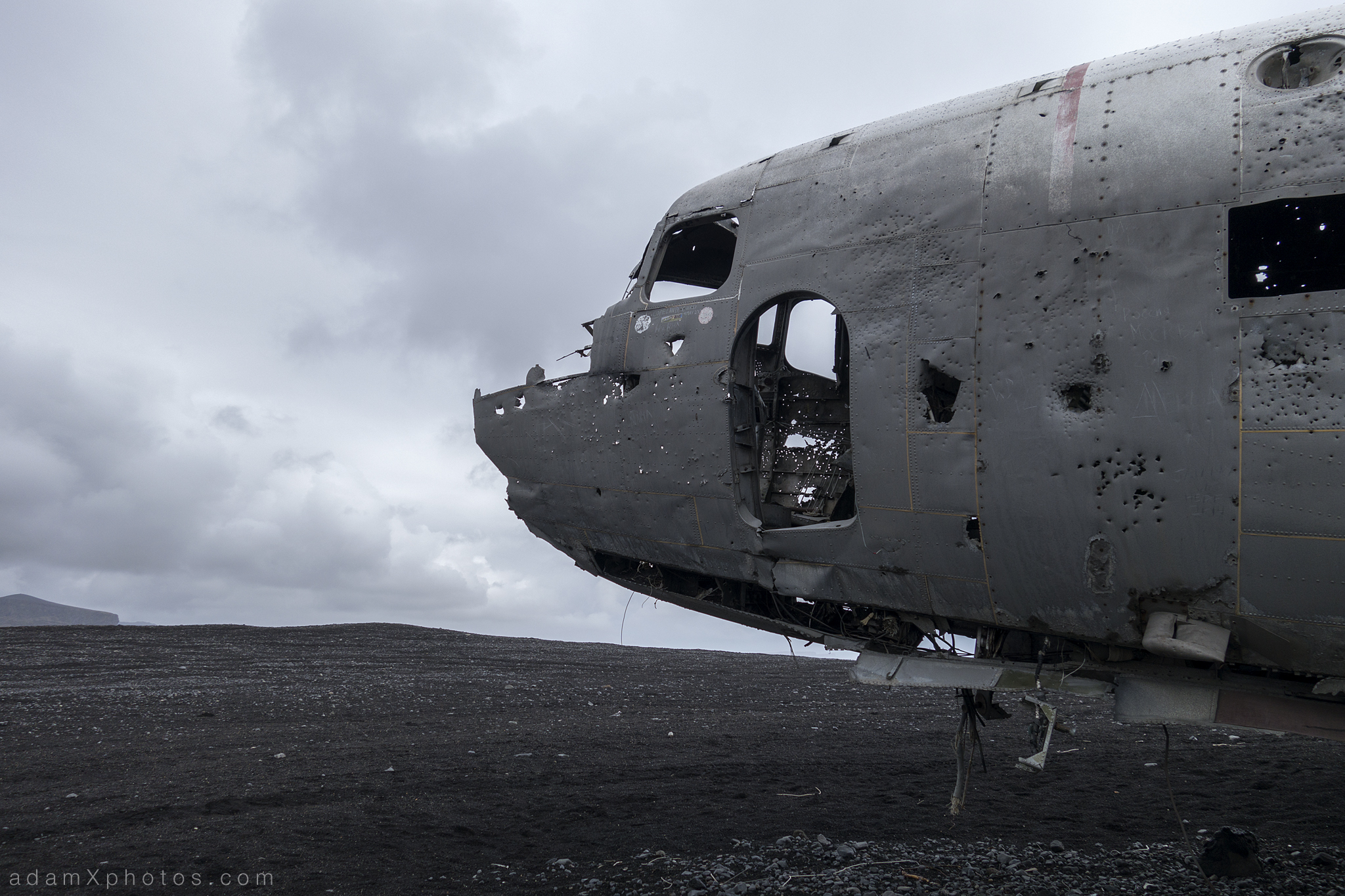 After my recent reports from Belgium I’m staying with the international theme, but with something completely different – the remains of a crashed DC3 plane abandoned on a black volcanic beach in Iceland!

Mrs X and I recently spent a wonderful 5-day holiday in the stunning land of fire and ice. But of course even with a “normal” (i.e. non urbexing) holiday there’s always room to squeeze in a cheeky explore. I’d read about this plane ages ago, so as soon as we decided upon our holiday to Iceland I knew that I’d have to see it for myself – in fact it was pretty much the main reason that we decided to hire a 4WD jeep rather than a cheap little Toyota Aygo car for our holiday…

The Douglas R4D-8 (Super DC-3 ) was a United States Navy transport plane which was forced to crash land on Solheimasandur Beach on Iceland’s Southern coast at approximately 2pm on Wednesday 21 November 1973.

The exact reason for the crash is open to speculation – whilst the Aviation Safety Network report states that the cause was “severe icing” and that the crew was unable to maintain altitude, other theories abound that the plane ran out of fuel, or that the crew mistakenly failed to switch to a second full fuel tank and crashed when the first tank ran empty. The Aviation Safety Network report also states that the crew crash landed on a frozen ice river, and that whilst the impact broke the ice the plane did not sink.

Thankfully all seven crew members survived the landing, but the plane was never salvaged, and its remains were left to local scavengers (rumours have it that a local farmer did off with the tail, the second tank (still full of aviation fuel) and other bits and pieces) and the unforgiving Icelandic weather, where is has stood battered and bruised for 41 years and counting.

Let’s begin, if we may, with immediately after this explore – as I was driving across the bumpy black volcanic beach in our trusty jeep, with the sun shining and snow-capped mountains towering on the horizon. “You’re loving this, aren’t you” laughed Mrs X. I don’t know what gave her that impression – perhaps that I was whooping from the top of my voice and laughing like a lunatic!

Yep, it’s safe to say that this was a VERY fun and extremely memorable little explore. However, only 45 minutes earlier things had not being looking so great, as we drove along Iceland’s main coastal road (road #1!) through absolute torrential rain. But only 5 minutes from reaching the GPS co-ordinates for our turnoff the heavens closed and the sun came out, and soon we were driving across the barren black volcanic landscape, trying our best to follow the faint traces of tire tracks which we presumed must have been left by previous visitors. I had scoped out the plane as best as I could on Google Satellite from my desk back in England, so knew roughly where I should be looking – you can make out its outline against the black beach if you [click on the image to view large]:

However, after about 10 minutes of driving we were getting closer and closer to the sea, and still I couldn’t see any sign of the plane. I was starting to worry that we had somehow driven past it, when suddenly it appeared before us only a few hundred metres away, having been previously concealed from view by a large black sand dune in front of it.

Mrs X and I spent a good 30 minutes looking around the remains of the plane, both inside and out, before finally jumping back into our jeep and heading back to the main road to continue our holiday. For me this was definitely a highlight of the trip, along with Iceland’s breathtakingly beautiful natural scenery. I would recommend a trip to Iceland to anyone, and we’re hoping to manage a longer revisit in a year or two!

Thanks for looking, and please sign up to follow this blog for updates if you haven’t done so already. Back to the UK for the next couple of reports coming very soon!