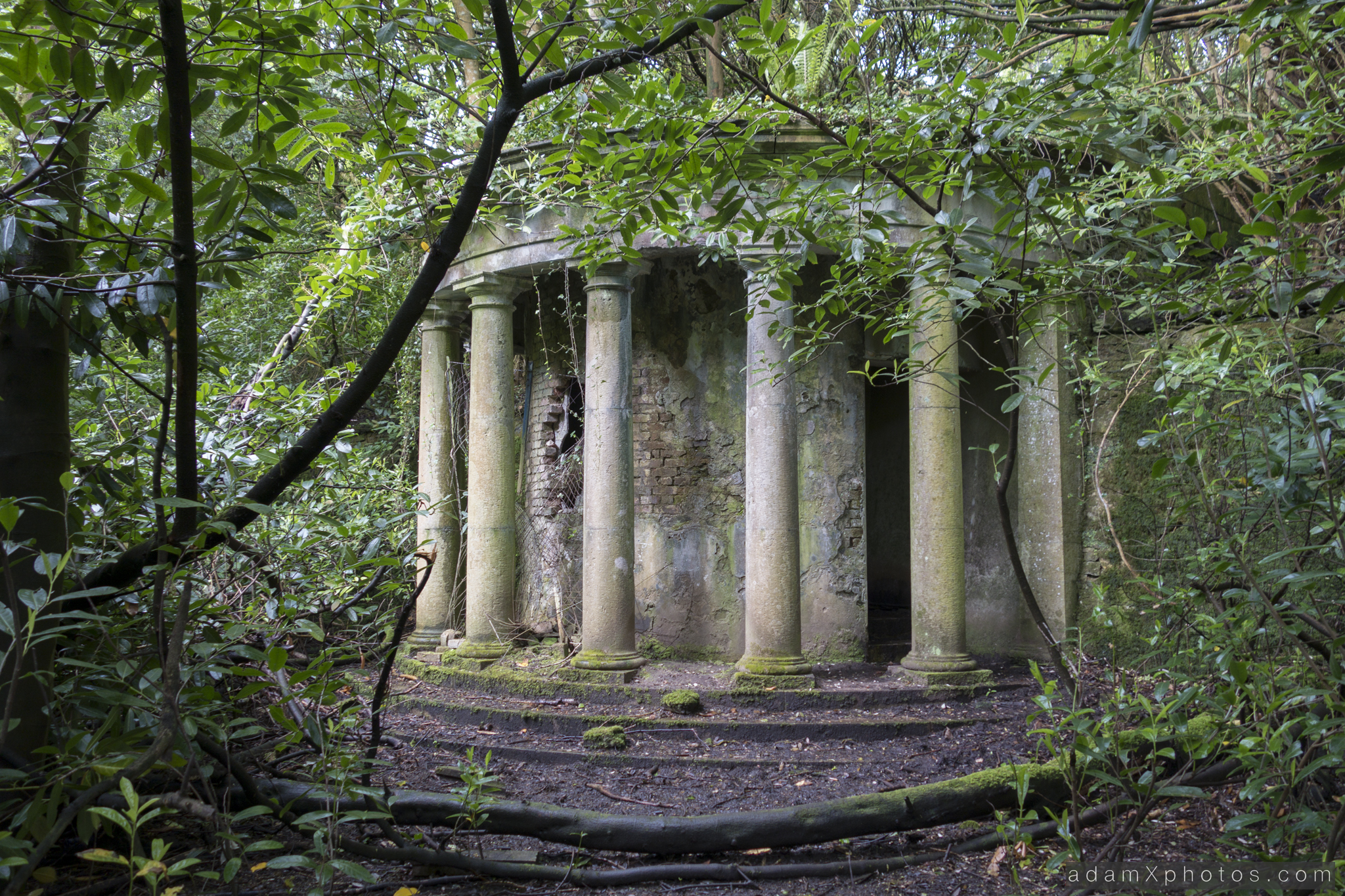 After my recent exploring in Belgium and Iceland, it’s back to the windy and rainy UK for my next report!

Upon our return from Iceland, Mrs X and I headed straight to Anglesey for a friend’s wedding. I took the opportunity on the morning of the wedding to nip up the road for a couple of hours on this solo explore.

I forgot to mention in my last report that my DSLR had a slight accident when I was in Iceland – a massive gust of wind toppled my tripod and the camera fell into the mud and water at the edge of a waterfall! Luckily the camera and lenses have made a complete recovery, but at the time of doing this (and my last report on the crashed DC3 in Iceland) it was still drying out, and I was limited to using my compact Sony RX100M2.

History (from wiki)
Baron Hill is an estate in Beaumaris, Anglesey, Wales, named after the hill on which it stands. It was established in 1618 by Sir Richard Bulkeley as the family seat of the influential Bulkeley family.

During the English Civil War, Richard’s successor, Colonel Thomas Bulkeley, is said to have invited King Charles I to take possession of the house and set up his court there.
In the eighteenth century the house was the seat of Lord Viscount Bulkeley, who maintained Jacobite sympathies. The Neo-Palladian style is obvious from the curved facade of the building to the terraces, follies and balconies; this was the style adopted during the 1776 reconstruction of the mansion by architect Samuel Wyatt. However, the mansion was originally built in 1618. There is also an icehouse in the gardens and a lodge house.

In the nineteenth century the occupants of Baron Hill remained the dominant Anglesey landowners, possessing estate also at Llanfairfechan and other parts of Caernarfonshire.
During World War I, death duties soaked up the family fortune and made it impossible for the family (by then called Williams-Bulkeley) to continue to maintain the house.

In World War II the Royal Engineers were stationed at the house. It was later damaged by fire, but the shell of the house survives. Sir Richard Williams-Bulkeley lives at neighbouring Red Hill.

In August 2008, plans were submitted to restore the house and turn it into luxury apartments.

My explore
As you will see from my photos the proposals to restore the house referred to above are still very much only on paper. I spent an enjoyable and peaceful couple of hours weaving my way through the overgrown woodland and exploring the main house, greenhouses, beautiful old folly, and ice house. The weather was extremely windy, with intermittent sunshine and showers, and far from ideal conditions to shoot buildings surrounded by and covered in overgrowth. As such these photos are very much handheld snapshots for documentary purposes, rather than having any photographic merit in their own right.

I made a beeline to see this beautiful old folly, hidden away in the overgrown woodland.

This is the view from the inside of the folly, back up the hill towards the steps which used to lead down to it.

The view back down the hill, towards the top of the folly.

I then came across the remnants of overgrown greenhouses and outbuildings…

Where the floors have long since gone, the fireplaces still remain.

I loved the remains of this old greenhouse…

..including this old gatehouse…

…and this icehouse, hidden up a slope amongst fallen trees and dense overgrowth. For once I didn’t have a torch with me…

…and reached the end of the tunnel to this mouth of the ice store.

I could not see this from the light of my phone – this vertical panorama is taken from a number of shots with the flash on. I never shoot with flash, so it took a but of fumbling around in the dark to turn it back on my camera!

Finally it was time to make my way back out and head back to get showered and ready for the wedding!