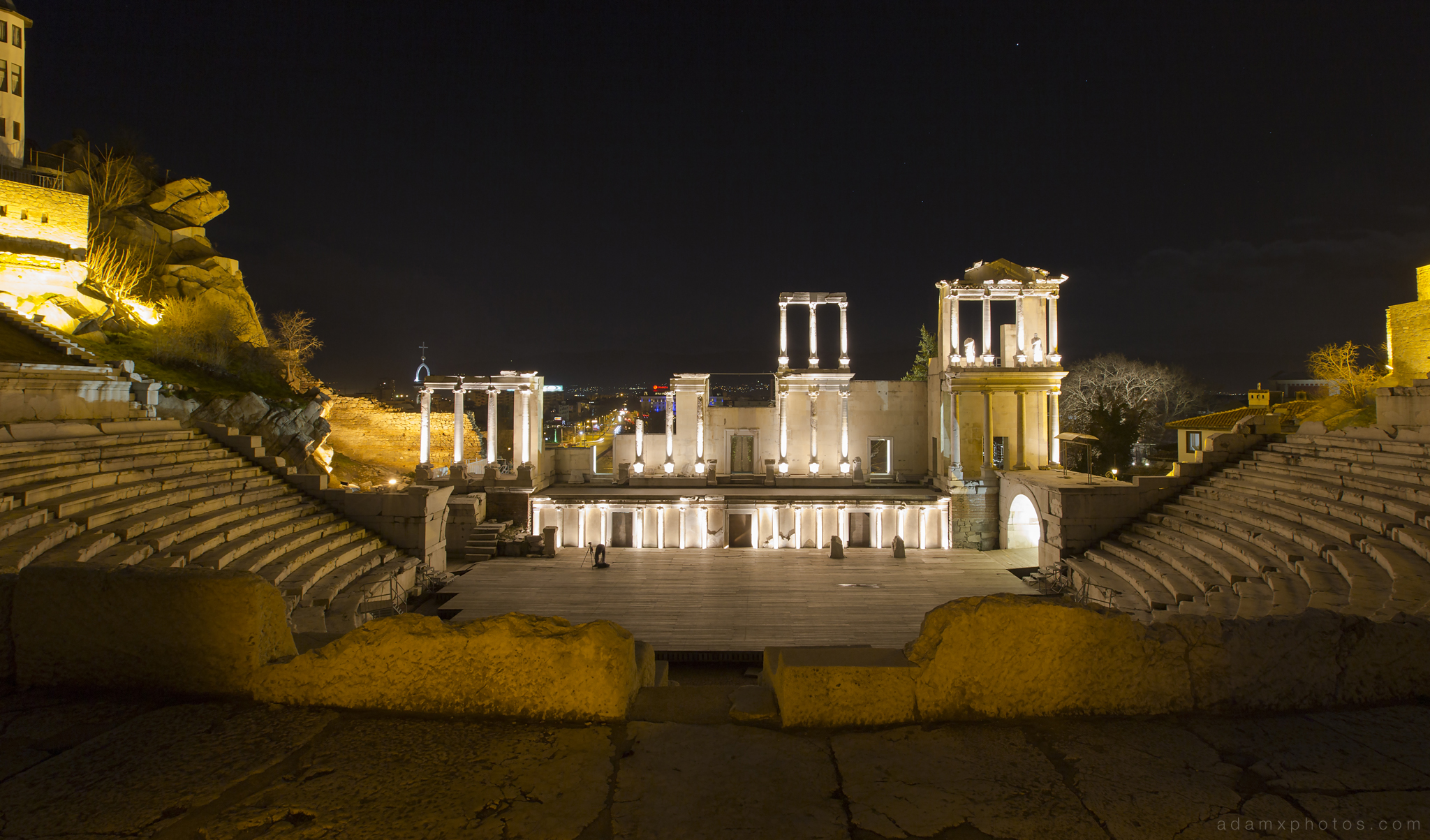 And now for something a wee bit different!

In January I was lucky enough to spend a fantastic long weekend with some of my best exploring buddies (and some new friends) in Bulgaria. The main aim of our trip was to spend three days exploring the incredible abandoned former communist party headquarters of the Buzludzha Monument – a Bond Villain HQ-esque monolith perched on a mountain top. My photos from there are coming up next…

…but first, here’s a few shots from somewhere I explored of on the first night…

History (abridged from wiki)
The ancient theatre of Philippopolis is located in the centre of Plovdiv (formerly Philippopolis) in Bulgaria. Although it is often referred to as an amphitheatre, it is actually a traditional Greek theatre. According to a builders’ inscription discovered on the frieze-architrave of the eastern proskenion (stage area), the construction of the theatre dates back to the time of Emperor Trajan (reigned 98–117 AD).

In outline, the theatre is a semi-circle with an outer diameter of 82 meters. The stage building – the skene– is south of the orchestra, and has three floors.

As with all theatres on the territory of the Roman Empire, the honorary spectator seats in the theatre were inscribed. These inscriptions were not only for the representatives of the city council, but also for magistrates, friends of the Emperor, etc. Some honorary inscriptions show that the building was used as the seat of the Thracian provincial assembly.

Gladiatorial fights with animals are also thought to have been held in the theatre, as remains of safety facilities in front of the first row have been uncovered. These additions were set because of the visit of Emperor Caracalla to Philippopolis in 214 AD.

The theatre was damaged in the 5th century AD by Attila the Hun, and was only rediscovered in the early 1970s due to a landslide. This caused a major archeological excavation, including the removal of some 4.5m of earth covering what was left hidden by the landslide.

The restoration of the Roman theatre in Plovdiv is considered one of the best achievements of the Bulgarian Conservation School. Today the ‘Theatre of the Three Hills’ is one of the emblems of the city, and a stage for classical drama, dance and music. During the summer months it hosts plays and musical shows.

Our Explore
Despite all my travels, I’m still a very nervous flyer. And I was on holiday. So naturally I had a few in-flight ‘refreshments’, and was most definitely ‘relaxed’ by the time we landed in Plovdiv.

After collecting our hire cars from some local contacts, which involved standing in the street, handing them cash, and them handing us the keys – no paperwork, no deposits… …we drove to a nearby supermarket to load up on supplies for the next few days. We bought lots of beer and what turned out to be terrible-tasting rum – well it had a pirate on the bottle, what more do you want! We also bought some food. It was all a bit chaotic and disorganised to be honest.

Once we had got the shopping trip out of the way we checked into our gorgeous hostel, which came complete with this welcome sign… “Nice to have you here Adam X and the Derpers!” 🙂

Whilst the rest of our gang chilled at the hostel, Dan of MrDan Explores and I decided to check out the ancient Roman amphitheatre/Greek theatre which was just down the road. Sipping on a couple of large bottles of the local beer we soon found a way in, and spent 30 minutes or so taking a few shots… We then ventured up onto the main stage area. A few minutes later we heard someone come running into the middle of the theatre area – a puzzled security guard was looking around, but hadn’t noticed us stood literally a couple of metres behind him in the centre of a floodlit stage!

We knew that there was no way we could move or escape without being heard, and that the longer we stood there without acknowledging him the more annoyed he would likely be when he finally did spot us, so we opted to call out an apologetic but cheerful-sounding “hello” whilst holding our tripods and cameras up so it was absolutely clear what we were up to. Queue a fair bit of grumbling in Bulgarian, some more apologetic-sounding words in English, and soon we were turfed back onto the cobbled street outside and making our way back to the hostel to grab a few hours kip before our drive to Buzludzha early the next morning.

Thanks for popping by