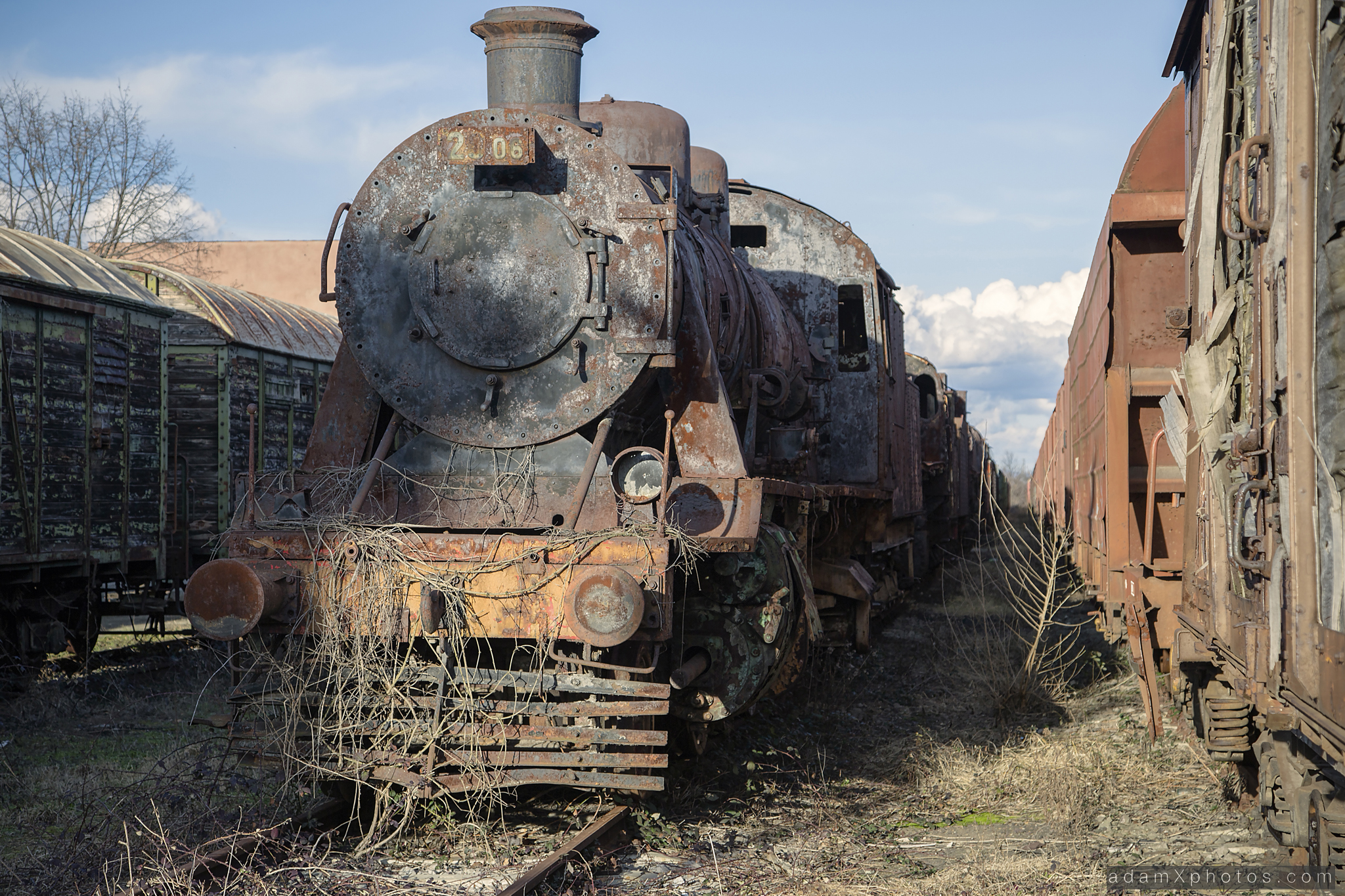 On the way from Buzludzha back to the airport, we just had time to pay a brief visit to this train graveyard, set in a decrepit two-horse town in rural Bulgaria.

History
There isn’t really much to report about Kaloyanovets – if you Google the town’s name the first search result refers to a train derailment on 12 July 2014 which killed the driver and injured seven passengers and staff, and part of the train was still present and cordoned off when we visited. The subsequent investigation concluded that the accident had been caused by the driver overspeeding and entering the points on which it derailed at 104 km/h, when the limit is 40 km/h. The automatic ‘ALS’ safety braking system was not working correctly on the day of the accident.

Our Explore
This turned out to be a very brief explore indeed for most of our group, as within minutes of creeping between the lines of decaying trains a small but extremely noisy guard dog appeared and started barking its head off at us! We had been warned that there were guards positioned on one side midway down the columns of trains, and that they had canine assistance, but there wasn’t really much we could have done to avoid being sniffed out. Whilst the rest of our group beat a hasty retreat back to the cars, James and I instead manoeuvred another couple of train carriages away from Mr Barky. Creeping on tiptoes we worked our way further along the overgrown sidings, listening intently for sounds of any human or 4-legged guards approaching. In the still late afternoon air we could hear various shouts and noises, but despite a few scares these all seemed to be coming from across the tracks from the direction of the nearby live train station. However, after only a handful of shots we heard the dog barking again, and what definitely sounded like human voices coming from just the other side the closest train! We jumped up into the nearest freight carriage to try and hide… when we looked around at our surroundings we saw pile of old dirty rags and clothes strewn in the corner. It looked very much as if homeless people had previously used the carriage for shelter – it was all a bit surreal and tense to be honest! After about 10 minutes the voices appeared to have retreated, and we decided that we had better make our way back to the others waiting at the cars. We grabbed a couple of quick handheld shots on our way back…. …and soon were back in the cars and heading down the motorway to Plovdiv.

The only hiccups on that journey were:

* James missing the motorway exit, resulting in a mere 60 mile roundtrip to the next junction and back again;

* The SatNav taking us down the ‘back’ way to the airport – which for the last mile or so was basically a dirt track strewn with 15-foot wide and 1-foot deep potholes; and

* James managing to drive his car headfirst halfway into a river!

As we pulled up into the airport carpark and were greeted by the ‘rental company’ (i.e. two blokes), James whispered under his breath that we should all grab our stuff, say goodbye, and get into the terminal as quickly as possible. Once inside he described to us the horrendous noise that his group’s car had made for the last half a mile or so from the river incident to the airport, and how he wanted to make a quick exit before they noticed! Luckily we didn’t hear anything further about it, so I guess they’re used that sort of thing happening with their cars.

After a quick freshen up we grabbed a table in the departures area and proceeded to get somewhat merry whilst polishing off a few beers and the last of the horrendous rum we had bought when we first arrived – for some reason it tasted a lot better than it had a few nights earlier!

We heard the call to proceed through the final security checks, but ignored these for another 20 minutes or so, as we knew that the airport was tiny and there seemed little point in giving up our comfy seats and rushing the last of our alcohol just to stand queuing at the departure gate for half an hour. When we did finally proceed through the security it transpired that we had timed it either a) too fine, or b) just right, depending on your perspective… when the airport security found out what flight we were booked on they flipped out and immediately rushed us all past the queues and straight through! The passengers left queuing for other flights looked on at our queue jumping antics with a mixture of envy and indignation (possibly outright hatred – we didn’t really care at that point), but sure enough once we had all been rushed through we still ended up spending another 5 minutes standing around by the departure gate before boarding commenced. We considered that we had timed it perfectly – albeit massively antisocially. 😉

And so we finally took off and headed home after few days which I will remember forever. Witnessing Buzludzha was a real privilege, but the fun and laughs with my friends were what really made the trip so special, and one which I will always remember with great happiness.

Thanks, as always, for stopping by.