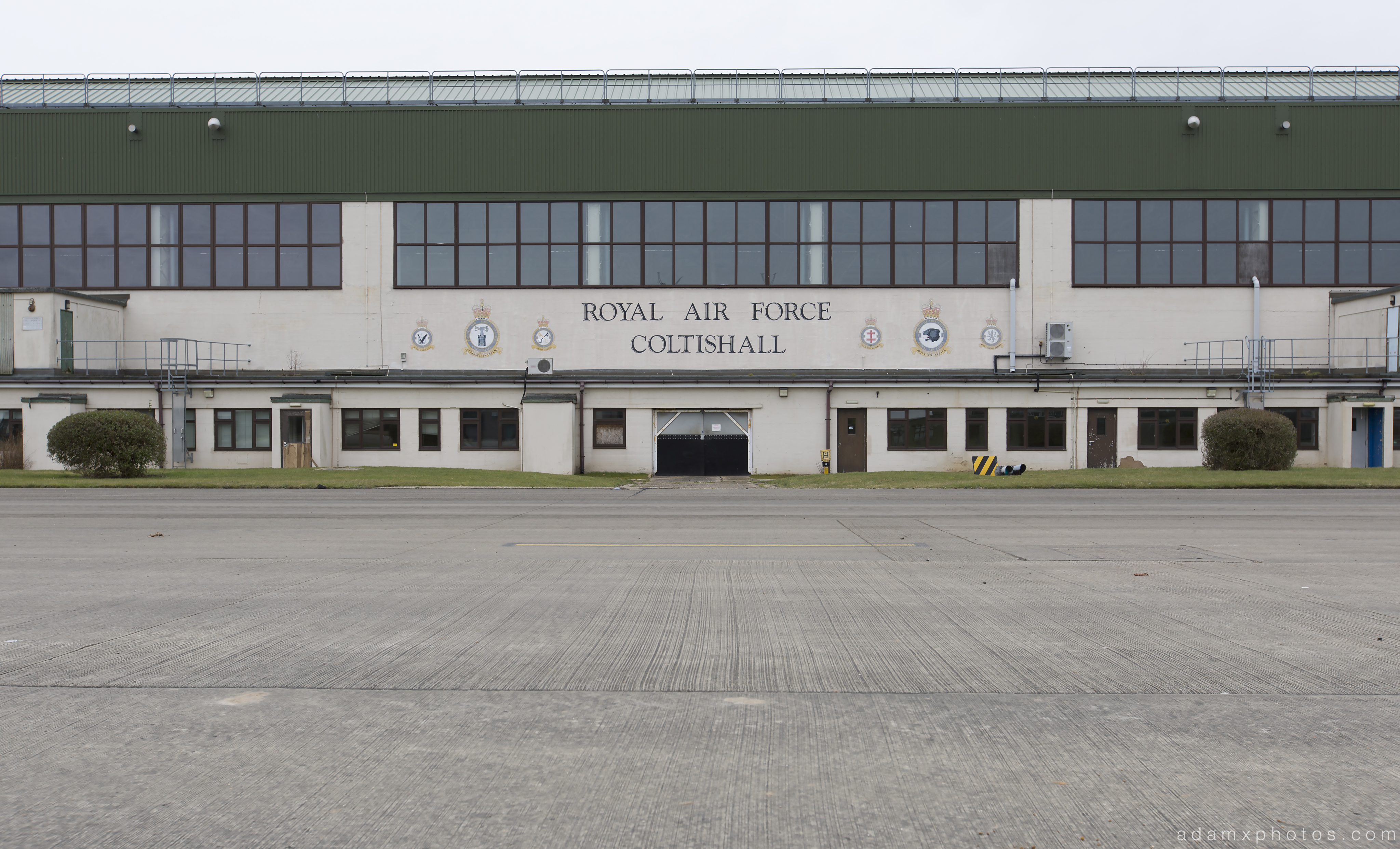 Something a little different with this next report – some photos from a location that I actually had permission to photograph!

My visit to RAF Coltishall was organised by an explorer friend who works for a local photography company. As a result, whilst the visit was technically open to the public, our Norfolk-based gang of explorers snapped up pretty much all of the available tickets so it ended up being very much an urbexers group outing! History
(abridged and amended from the original text by the Spirit of Coltishall website, and this article – all rights acknowledged)

Construction of RAF Coltishall (then known as Scottow Aerodrome) began in February 1939. Initially built as a bomber base, the airfield was completed and entered service in May 1940 as a fighter base, named after the local village of Coltishall.

During the Second World War, Coltishall operated the Hawker Hurricane, and a notable Coltishall fighter pilot was Douglas Bader. It later became home to night fighters. At the same time the Royal Navy Fleet Air Arm operated aircraft from RAF Coltishall over the North Sea. At the end of the war, Coltishall was briefly given over to Polish squadrons until they returned home.

In the 1950s RAF Coltishall was a designated a ‘V-Bomber dispersal base’ which the bombers of the V-force aircraft, the Avro Vulcan, Handley Page Victor and Vickers Valiant could use in the event of their home base being damaged by enemy action.

Post-war, the station was home to a variety of units and aircraft including de Havilland Mosquitos, Gloster Javelins, English Electric Lightnings. The last Lightnings left Coltishall in 1974, and were replaced by the Anglo-French SEPECAT Jaguar. The first Jaguar squadron, No. 54 Squadron RAF, arrived at Coltishall on 8 August 1974.
Some of the station’s pink painted Jaguars participated in the 1991 Gulf War Operations GRANBY and Warden, without sustaining a single loss of man or machine in combat. Subsequent operations included over the Balkans (Operation Deny Flight)) and then later Iraq once more. Coltishall was also home to the yellow Search And Rescue (SAR) helicopters of 202 Squadron, conducting air-sea rescue operations (Sea King) and latterly 22 Squadron (Wessex), before moving to RAF Wattisham, in Suffolk where they still remain.

Coltishall eventually became the last surviving operational RAF airbase involved in the Battle of Britain, and a visible remnant in the form of a Second World War revetment still stands on the North-West taxiway. With the anticipated arrival of the Eurofighter Typhoon in the RAF, the gradual retirement of the Jaguar force began. Coltishall was not chosen as a future Typhoon base for a number of reasons, and so, with no future RAF role for Coltishall, the station was earmarked for closure. Disbanding of the Jaguar squadrons began in March 2005, and the final squadrons departed in April 2006.

Some limited flying from light aircraft including those of the Coltishall Flying Club continued after the end of RAF flying operations until October 2006. While 1 April 2006 saw the disbandment parade for the station, it did not actually disband and finally close until 30 November 2006, when the closing ceremony included a flypast by four RAF Jaguars and a solitary Hawker Hurricane from Imperial War Museum Duxford. Associated facilities such as the Douglas Bader Primary School were also closed.

On 30 November 2006 RAF Coltishall was officially handed over to Defence Estates (the MoD agency responsible for all UK Military sites). During 2007 the Home Office began exploring alternative uses for the site. Eventually part of the site which housed the former airmen’s H-blocks, junior mess, and social club were redeveloped during 2009 into HMP Bure, a category C prison.

In 2013 the remainder of the site was purchased for £4m by Norfolk County Council, which has pledged to develop the site into ‘Scottow Enterprise Park’, creating jobs and generating income for the Council. Plans include the addition of a huge solar farm, and by November 2014 Council officers said that 66% of the available floor space at the former base was either rented out or under offer.

Our Explore
This was a fun couple of hours, exploring the various buildings which were open to us, and ended off in the control tower….

We started off in some of the officers’ and administration buildings… …on to the Frame Room and the old telephone/communications exchange… …we then explored one of the old command bunkers, but sadly most items of interest had long since been stripped out… …then on to the swimming pool… …I then found the “Expedition Store”, and couldn’t resist taking a quick selfie… …except for this rather nice circular window/peeling paint combo. Thanks for flying in.