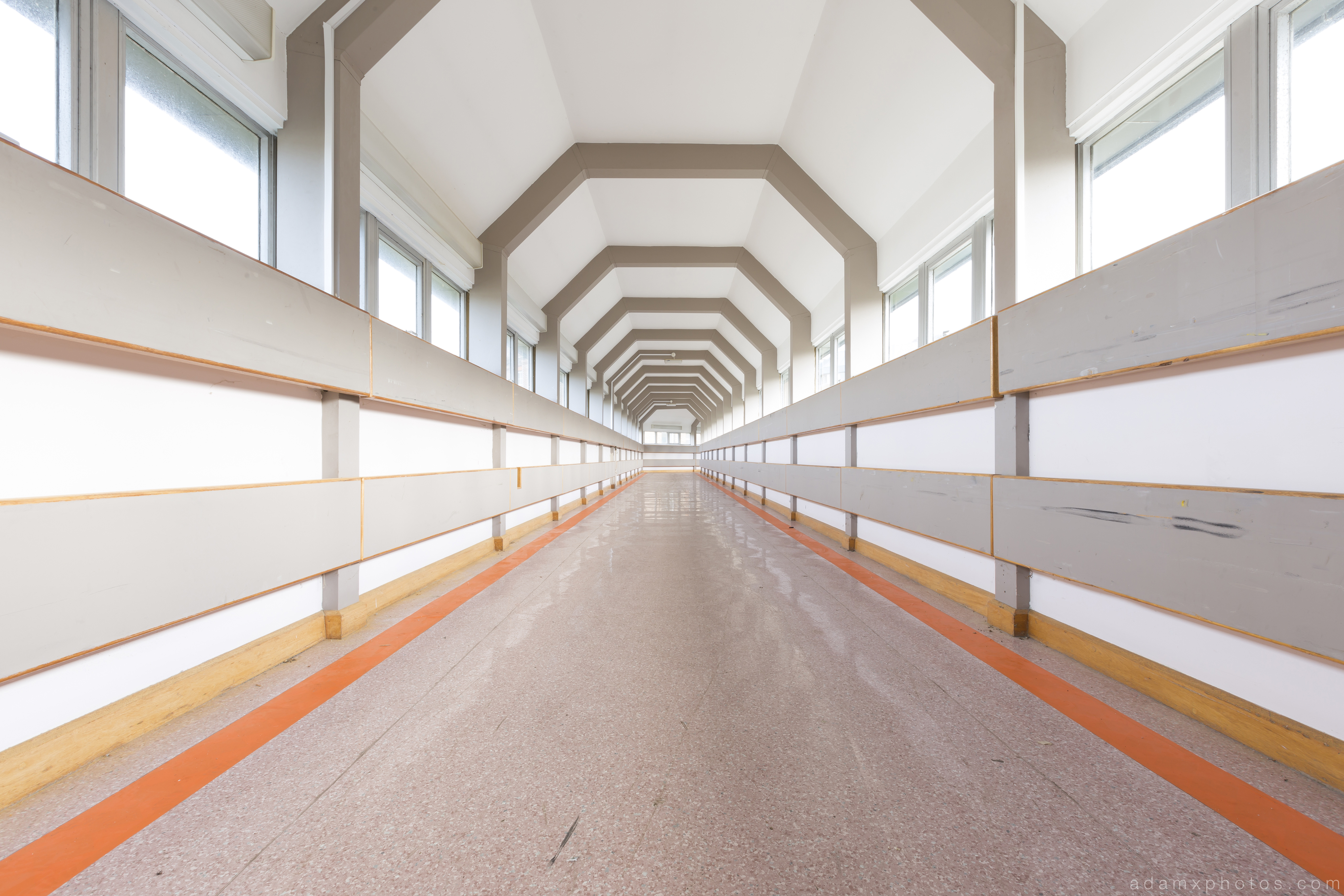 After our fun and games of an impromptu explore of HMS Victory the previous evening, it was an early start for my final explore of 2015: a huge disused military hospital with a long and proud history.

History (amended from wiki)
Founded in the reign of King George I, the Royal Hospital Haslar was designed by Theodore Jacobsen and built between 1746 and 1761, opening as a Royal Navy hospital in 1753.

It enjoyed a long and distinguished history in the medical care of service personnel both in peacetime and in war, treating many tens of thousands of patients, and was the country’s foremost – and ultimately last – military hospital. Its military status was withdrawn in 2007, with remaining military personnel redeployed to the Ministry of Defence Hospital Unit (MDHU Portsmouth) at Queen Alexandra Hospital in Portsmouth. In the summer of 2009, all remaining (civilian) medical services at Haslar were also relocated to the Queen Alexandra Hospital, and the site was subsequently sold.

The Royal Military Hospital Haslar had a number of notable specialist medical facilities, including a decompression chamber and a zymotic isolation ward. Dr James Lind, a leading physician at Haslar from 1758 to 1785, played a major part in discovering a cure for scurvy. The hospital included an asylum for sailors with psychiatric disorders. In the 1940s the hospital set up the country’s first blood bank to treat soldiers wounded during the Second World War.

In 1966 the remit of the hospital expanded to serve all three military services – the Royal Navy, Army and Royal Air Force, after which time it became known as the Royal Military Hospital Haslar. In 1996 its name changed once more to the Royal Hospital Haslar.

The Royal Hospital was the last MOD-owned acute hospital in the UK. The decision to end the provision of bespoke hospital care for Service personnel was taken prior to the UK’s expeditionary campaigns in Iraq and Afghanistan, but was nevertheless followed through, largely on the grounds of cost. The change from military control to the NHS, and the complete closure of the hospital have remained the subject of considerable local controversy.

The site is now being owned by developers, with a huge £100m scheme approved which includes a 78-bed hotel, 286 homes, a retirement community with a 60-bed care home and 244 self-contained retirement units, along with business units.

Our Explore
On the last day of 2015 this was a really fun way to round off another great year of exploring. The sun was shining and we managed to work our way on site, avoiding security patrols and a close call when we saw a couple of police cars outside one of the buildings (they weren’t after us), finding a way in past the many sealed windows and doors, and had a good couple of hours roaming the main wards and corridors. A lot of equipment has been stripped out compared to a few years ago, but all in all it was still great to finally get here, even if we didn’t have time to see everything.

As always, please click on a photo to VIEW LARGE

We started off in the x-ray area…

…quick MRI selfie, as you do!

There was some typically sensationalist reporting in the Daily Fail a few years back which had expressed outrage at the expensive medical equipment left behind when the hospital closed. The reality is that this equipment was left because it was too heavy and difficult to install to be cost effective to take elsewhere, and much of the equipment had also long since been superseded by newer technologies.

We then moved on to a medical laboratory…

A rather special feature of Haslar Hosptial was its tramway system, which was built in 1877 as a single line running from the Haslar Jetty into the Main Arcade of the hospital.

At the jetty there was an ambulance shed with a junction for the storage of the ambulance tram and a similar junction at the Arcade. The two trams were built by the London and Midland Railway. Hospital boats collected the sick, wounded or dead from the anchoring fleet at Spithead and the dockyard and ferried them to the jetty, where they were transferred to the ambulance. Sick Berth staff then pushed the ambulance to the Main Arcade, where the patients were then carried to the hospital receiving room for admission.

One of the old wards…

…looking up the stairs from the basement…

…and back down from the top.

…and the rehabilitation hydrotherapy pool.

These futuristic-looking external corridors were added in the 1980s, connecting the wards with operating theatres and additional patient support services.

I finished with a selfie stood on the roof of the crosslink building looking back towards C and D Wards – thanks to James for pressing the shutter! 😉

Finally it was time to head back to the car and make the long drive back up to Norfolk for the New Years Eve celebrations.