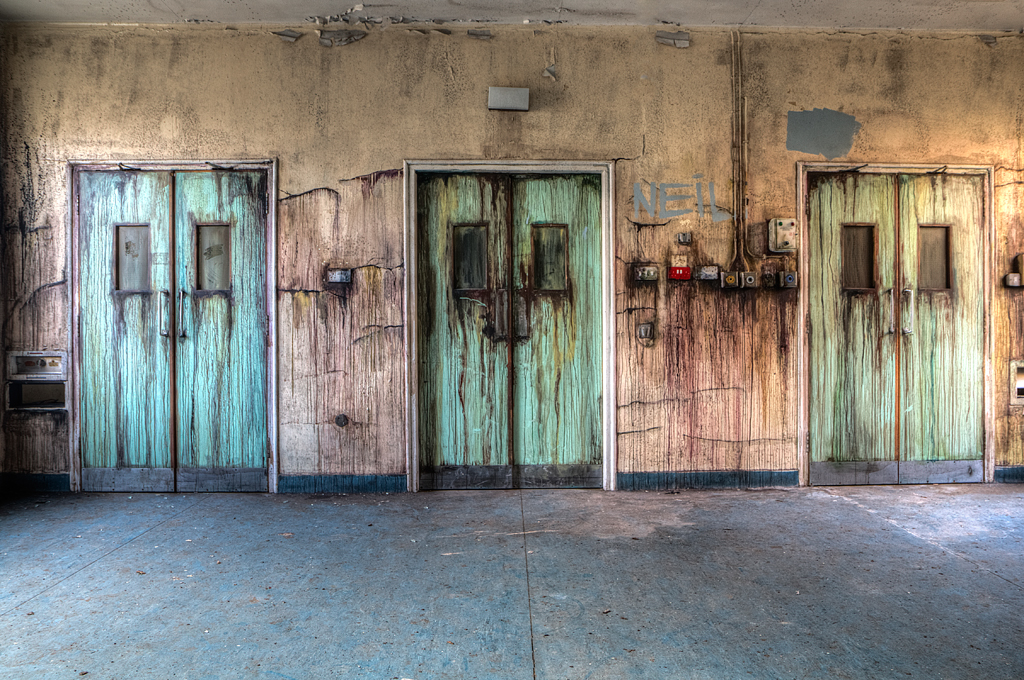 After a night of breathtaking views in great company on the Kings Reach Tower climb it was time to make the middle-of-the-night drive solo down to Aldershot for my next target – Cambridge Military Hospital (or CMH to its friends).

It was a surreal experience coming down from the adrenaline high of earlier in the night and driving around an almost deserted M25 at about 3.45am – at one point I must have driven for over a minute without seeing any other cars in either direction. I pulled in to Aldershot just before dawn, and attempted to shoehorn my 6’4″ frame across the back seat of my car to try and grasp a few precious moments of sleep. I managed about 45 minutes before it was time to rendezvous with my exploring companions for the day – Laura Cautious Jane, Chris Rand, and Marlon Bones.

A brief history, courtesy of wiki:

The Cambridge Military Hospital, built by Messrs Martin Wells and Co. of Aldershot, was located at Stanhope Lines. It was named after Prince George, Duke of Cambridge and opened on 18 July 1879. In the First World War, the Cambridge Hospital was the first base hospital to receive casualties directly from the Western Front. The Cambridge Hospital was also the first place where plastic surgery was performed in the British Empire. Captain Gillies (later Sir Harold Gillies), met Hippolyte Morestin, while on leave in Paris in 1915. Morestin was reconstructing faces in the Val-de-Grace Hospital in Paris. Gillies fell in love with the work, and at the end of 1915 was sent back from France to start a Plastic Unit in the Cambridge Hospital.

After the Second World War, with the decline in importance of Britain’s military commitments, civilians were admitted to the hospital. It pioneered the supply of portable operating theatres and supplies for frontline duties. The hospital also contained the Army Chest Unit. It was closed on 2 February 1996 due to the high cost of running the old building as well as the discovery of asbestos in the walls.

These days CMH is guarded by (in)famous ghurkas, renowned for their explorer-intercepting skills. It is also not uncommon for police dog training exercises to be carried out in the hospital’s grounds.

We were keen to explore the main hospital building, but I persuaded the others to start first with the maternity ward, home of CMH’s famous “bleeding doors”. I’m glad we did, because after about an hour there we were busted by the aforementioned ghurka security whilst en route to the main building. After a few minutes of exchanging pleasantries with Mr Ghurka he was joined by another member of security – this time with a ferocious Alsatian guard dog in his van. Well the dog was in the van until Laura persuaded Secca to get the dog out to show us! I smiled politely and sidled behind the nearest explorer – let’s just say that I’m more of a cat person! 😉

We were then escorted out by Secca, as he proudly proclaimed that they catch “90-95%” of explorers – to which Laura replied “Well this is the fourth time I’ve been here, and the first time you’ve caught me, so more like 25% actually”. Classic. 😀

As our visit was prematurely curtailed I’m afraid I’ve only got a small selection of shots for you this time, but I’ll definitely be paying a revisit to CMH for the main building at some point later this year!

Right, down to business. Those doors: One of the old wards – more peelage-a-go-go. Nature reclaiming one of the upstairs rooms. And finally my first attempt at a solo group shot via the dark arts of Photoshop. Thanks for looking, and please sign up to follow this blog if you haven’t done so already.