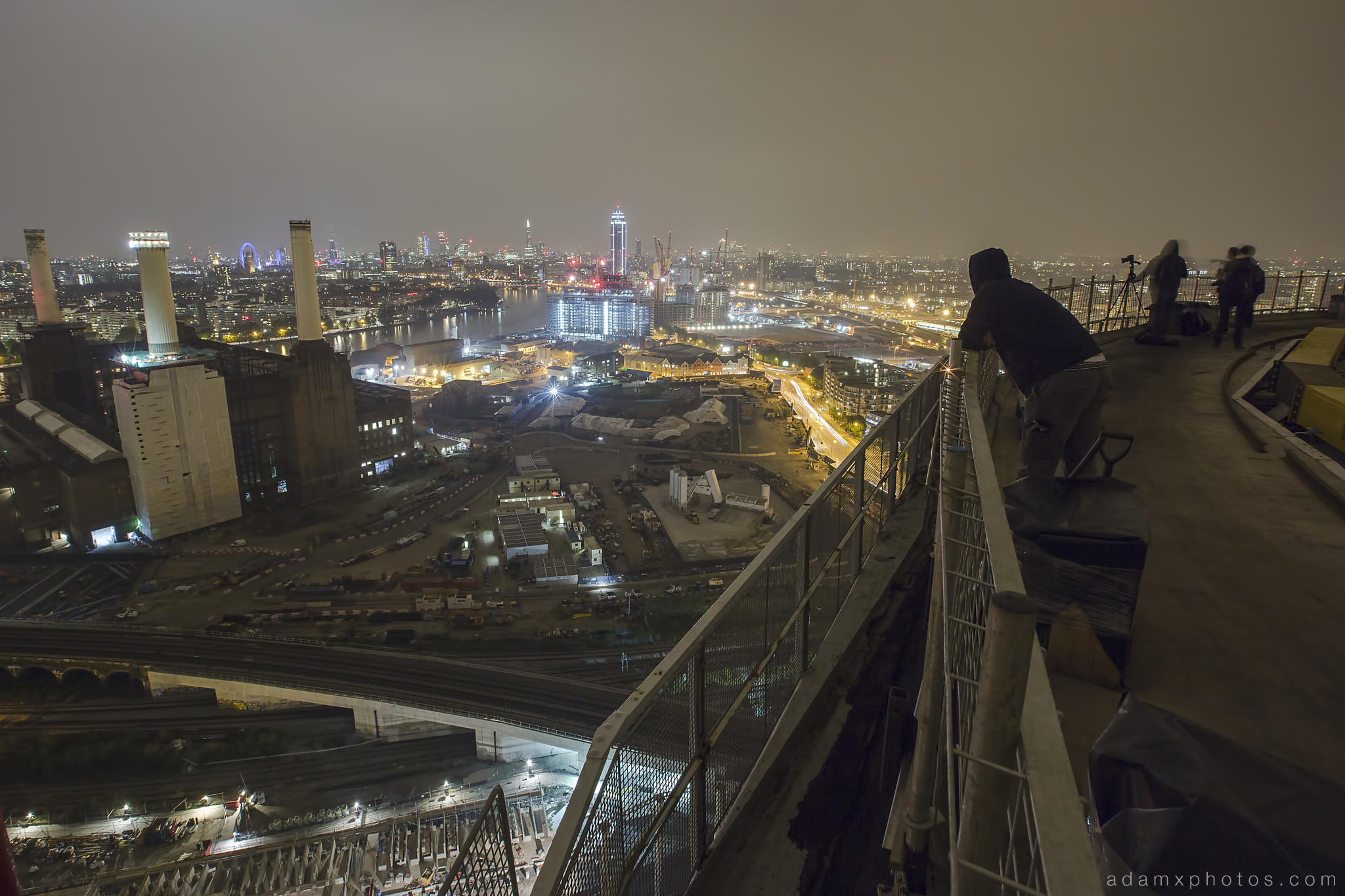 One hundred different locations successfully explored (not including revisits or failures) in 384 days since my very first explore at Rock N Roll Farm. That’s an average of nearly two new locations a week – I think it’s safe to say I’m quite into this urban exploration lark…

After my “Berlin or Bust” roadtrip to Germany (see my recent reports) it was back to the UK – this time meeting up with a few old and soon-to-be-new friends for a night of rooftopping in London. The first target was the huge Gas Holder #7 at Battersea.

History (abridged from here and here).

Battersea gas holders originally stored town gas produced by the nearby Nine Elms Gasworks. The gas works was established in 1853, and the first 3 gasholders (#1, #2, #3) were destroyed in November 1865 when an explosion in a neighbouring site triggered a catastrophic fire which claimed ten lives and injured many more. Gasholders #4, #5 and #6 were built between 1872 and 1883, followed by gasholder #7 in 1932.

Gasholder #7, a blue MAN holder, is a rigid waterless gasholder through which the gas flow was regulated by a piston. MAN stands for Maschinenfabrik Augsburg-Nürnberg – the German company which developed the design of the holder, although the holder itself was built under licence by an English company called R&J Dempster.

After the discovery of North Sea oil and gas reserves, the need for gasworks rapidly diminished, and the gasworks closed completely in 1970.

Following a local community consultation process which began in October 2012, Wandsworth Council granted permission in January 2013 for the gasholders to be dismantled. The process of taking the holders down and clearing the site began in September 2014 and is currently ongoing. An interesting little post about the complexities that the engineers face in dismantling #7 can be read here.

Our Explore
I’ve mentioned before that I’m not great with heights.

Well this had to go down as one of, if not the, scariest climb I’ve done so far. Our ascent up the 90 metre holder was via (five? six? I lost count) stories of rusting mesh metal stairs which circle around the outside of the holder. As you climb you’re looking straight out into the night…and the ever-growing drop beneath you. To give you a comparison Big Ben is 96 metres tall.

I made sure I was positioned in the middle of our group and tried to concentrate on the back of the explorer in front of me as we made our way ever upwards, my heart beating out of my chest and my mouth filled with the acidic mix of adrenaline and the exertion of the rapid climb. Whilst researching the history of the gasholder I chanced across an earlier report by another explorer who apparently shares my reservations with heights. I found his quote by Mark Twain to be very apposite in such circumstances: “Courage is resistance to fear, mastery of fear, not absence of fear”…

…well I had plenty of fear, but my desire to see the view from the top kept me going, and eventually we had made it.

Within a few minutes my heartbeat had slowed to normal, I regained my breath, and was able to spend the next 45 minutes or so enjoying the brilliant views over Battersea Park, the Power Station, and across the river. We also had a look inside the top of the gas holder, but I made do with peering into the dark depths with my torch and didn’t take any photos inside.

Finally we headed back down the rickety metal stairs and were soon back out onto the London streets and planning our next rooftop of the night – the report from that is coming very soon.

Thanks for looking, and if you haven’t done so already then please feel free to sign up to follow this blog, and you’ll be notified whenever I post something new.