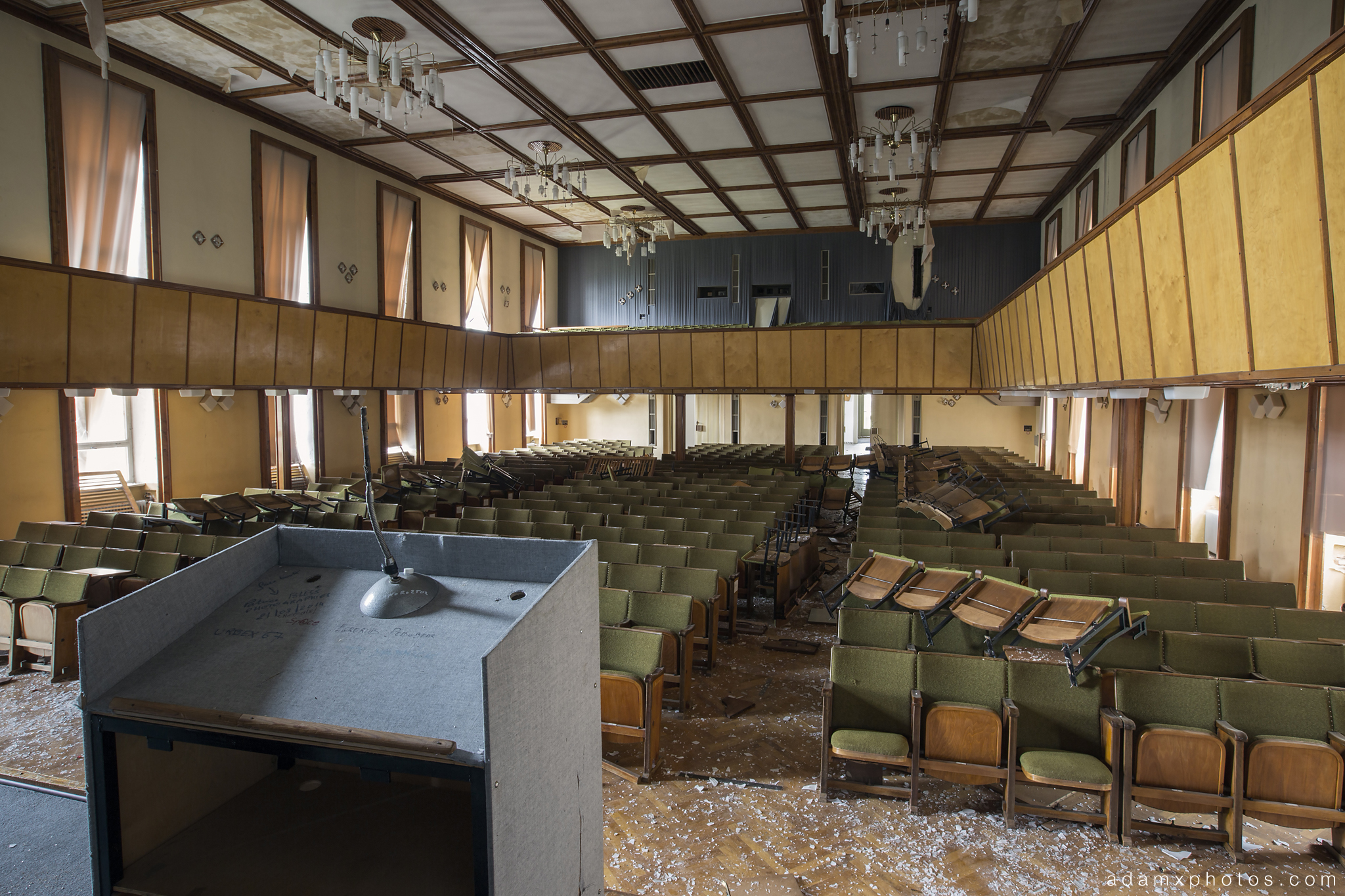 Explore #11 of the Berlin or Bust Tour

After exploring the Hospital of wheelchairs we drove a few more hours to this former Nazi School.

History
This large complex of buildings was built in the 1930s as a National Socialist Political Educational Institution – in other words, a Nazi school. A testament to the arrogance of the Third Reich, the buildings are arranged in an “SS” layout when viewed from above. After WWII the site was put to various uses, including a school, a ministry, and a boarding school.

Our Explore
By the time we arrived we were already massively up against it in terms of getting to Calais in time for our ferry, so this was a quick in and out explore – which is a shame as I’d love to have spent longer here, taking my time over the photos and exploring more of the complex. Still, something is better than nothing, and it was still an enjoyable and successful final explore of our Berlin or Bust Tour. The view from the lectern on the stage of the main auditorium. A pair of old projectors still remain in a room at the back of the lecture hall. The view from the upper tier at the back of the hall. Sadly the auditorium has recently fallen victim to vandalism – until only a year or so ago all of the seating was pristine. The back of the auditorium from the ground floor… …and the view from the stage.

All too soon it was 15 minutes past the latest time we’d promised ourselves we would be back on the road, and so we made our hasty exit. We programmed Calais into our sat nav, and were welcomed with the news that we still had another 550+ miles to go… and that’s not including the drive on the other side of the channel! We laughed slightly hysterically “As if 500 miles is even a distance!” “As if!” “Pwahahaha” etc, and began the tortuous drive home. It rained torrentially for the last 5 hours of the drive (much of which James did as I was feeling decidedly unwell), and we witnessed at least one serious car smash en route.

We finally made it to Calais, but had inevitably missed our ferry and had to wait another 6 hours for the next available crossing! We grabbed some food and a couple of beers, and then fell fast asleep in the car, woken several hours later by someone knocking on our window as the cars in front of us had boarded our ferry. Once onboard I slept for another hour, sprawled across seating like an urbex hobo, and then took over the driving for the final leg back to Norwich whilst James tried to grab some more sleep in the back. We finally rolled into Norwich at about 5am – thankfully I had booked the day off work, but James hadn’t so it was quite a struggle for him!

And so ended a manic but brilliant few days, and my first ever trip to Germany. I’m sure it won’t be long before I’m back.