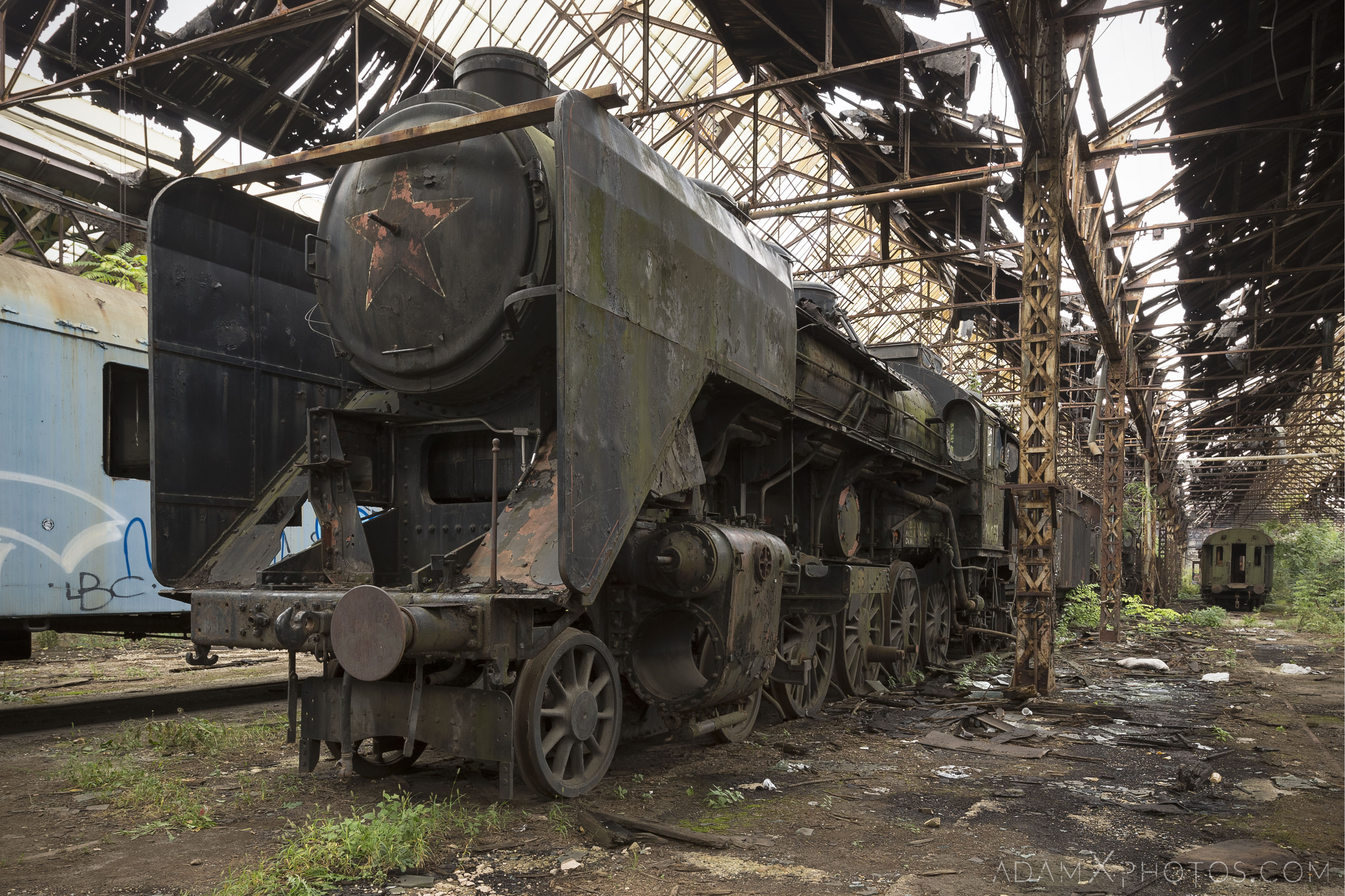 Explore #1 of the ‘Lightweights & Heavyweights’ Tour

Coming up are some posts from a fantastic five days in and around Budapest in September 2018 with Mark, James and Jade. We explored some real ‘heavyweights’ of abandoned beauty, as well as enjoying Budapest’s traditional sights and getting very drunk in their famous ruin bars (we being the ‘lightweights’ part of the tour title!) and soothing our hangovers in magnificent outdoor spas.

As soon as we had collected our car and checked into our Airbnb, we headed straight out on a mission to infiltrate the incredibly atmospheric Istvántelek Train Graveyard…

History (abridged and rewritten from here)

Istvántelek Train Yard (Istvántelki főműhely), also known as the ‘Red Star Train Graveyard’ occupies a large swathe of land in a North-Western suburb of Budapest. It is estimated that over 100 locomotives and train cars are scattered throughout the site – some in dilapidated sheds, others out in the open. Among these are some very rare train engines, and a few cars that are even rumoured to have transported prisoners to Auschwitz during the Holocaust.

Built at the beginning of the 20th century as a repair yard for the national railway, much of the site has fallen into disrepair. Nowadays much of it is overgrown, although several small businesses are still active on site.

Some of the trains date back to Hungary’s communist past, and were brought to the yard with the intention of being repaired and exhibited in the Budapest Railway Museum. However, those which never made it to the display were abandoned in the train yard, where they have fallen into decay ever since. The most famous train still on site is a Hungarian MAV 424 steam engine weighing approximately 137 tons and bearing a red star on its front, which earned the train yard its nickname. There are also several German freight cars stored in the yard, which may be the very ones that transported hundreds of thousands of Hungarian Jews to their death in Auschwitz during Nazi occupation in World War II. However, such suggestions appear based mainly on a possibility or probability given their age, rather than any fact-specific corroboration.

Our Explore
Despite claims that the Train Yard is now semi-abandoned, it certainly wasn’t when we visited! There were obvious signs of human activity within the yard even before we tried to get in – shouting, banging, plumes of smoke rising (presumably from small rubbish fires), non-derelict cars parked on the perimeter etc etc. I always try to spend some time researching potential access options for priority explores, and this was no different, so after waiting for the coast to be clear we scaled the wall in the section we had planned and quickly ducked into the nearest thick undergrowth to get out of eyesight. After quietly picking our way forwards through the bushes, and climbing through an abandoned train carriage in their midst, we made our way to the edge of the main train sheds. Again we heard noises – talking and shouting, as well as dogs barking (not good!) and could see that smoke from one of the fires was only 100 metres away at most. We proceeded in full stealth mode, and eventually we had picked our way through to the end of the main shed and were rewarded with our prize…. 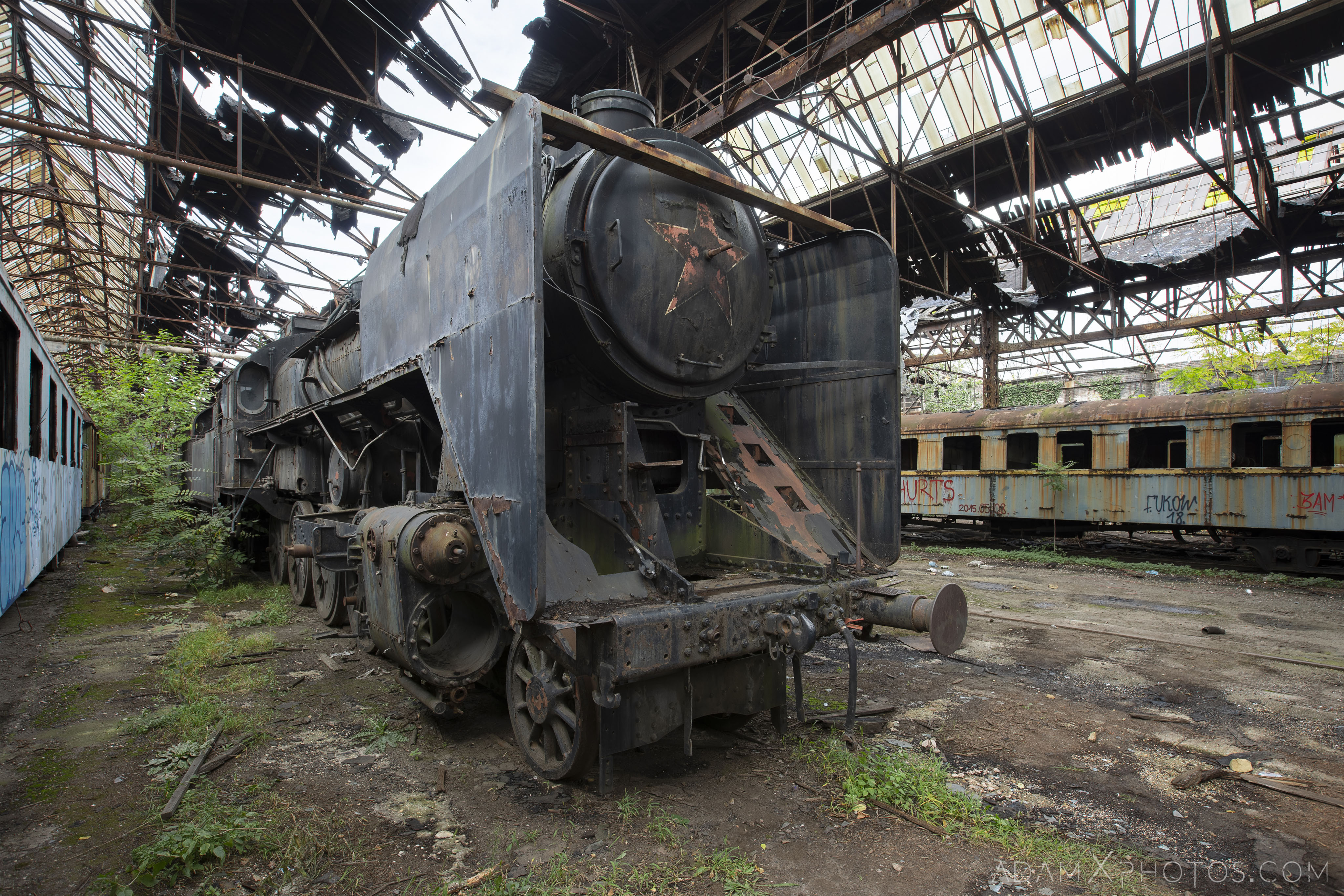 We spent another 45 minutes or so grabbing a few more photos, all the time our senses on high alert as the noises of human and canine activity sounded ever closer… 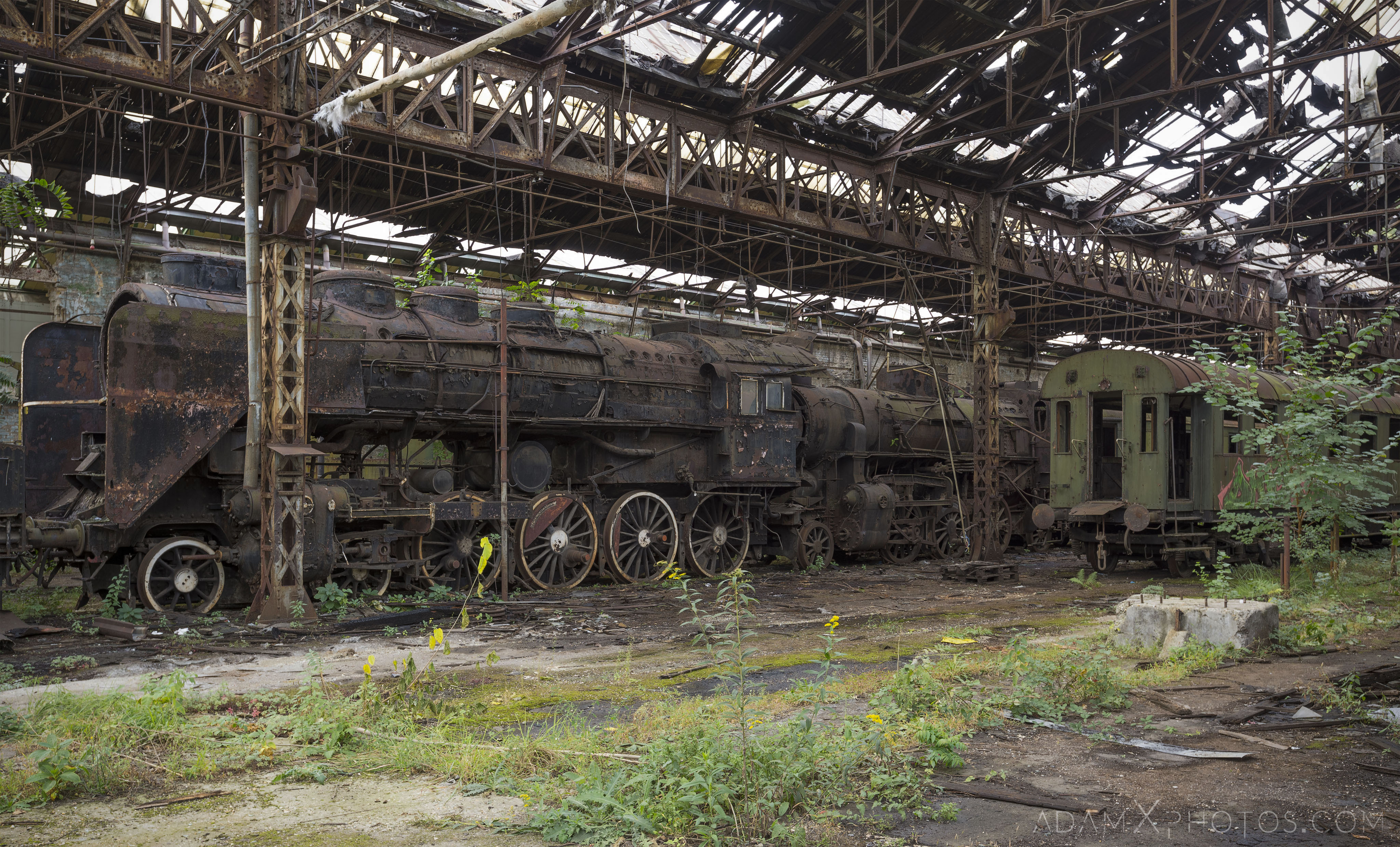 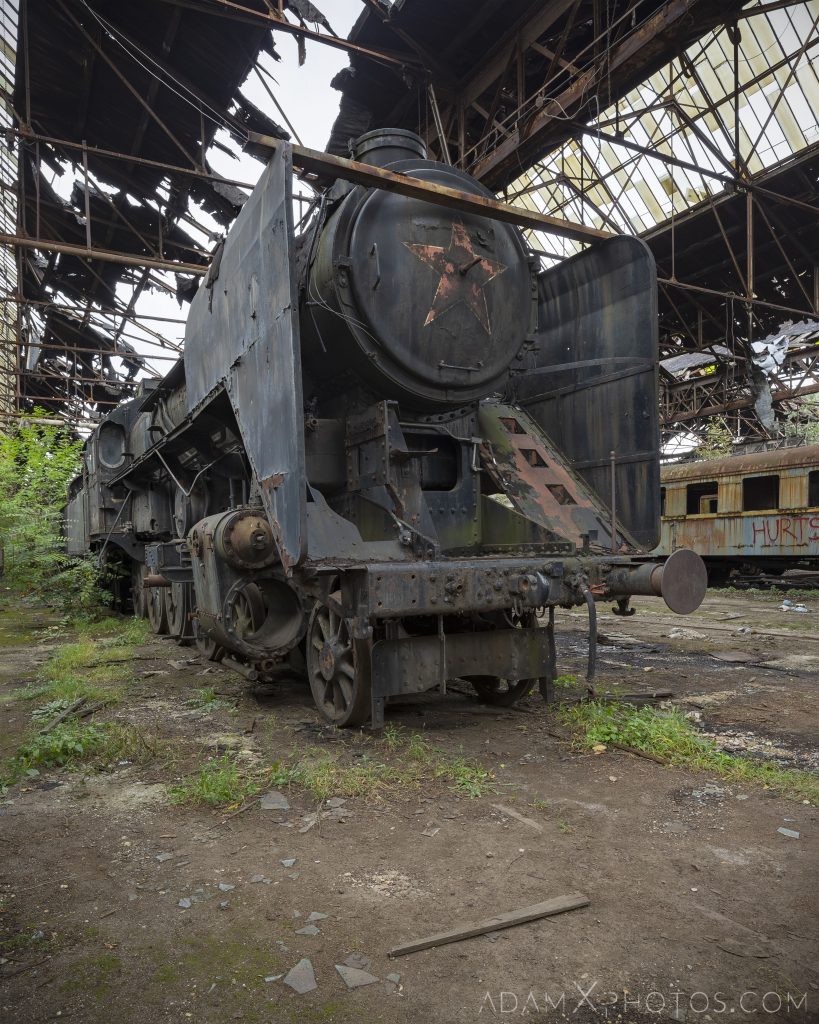 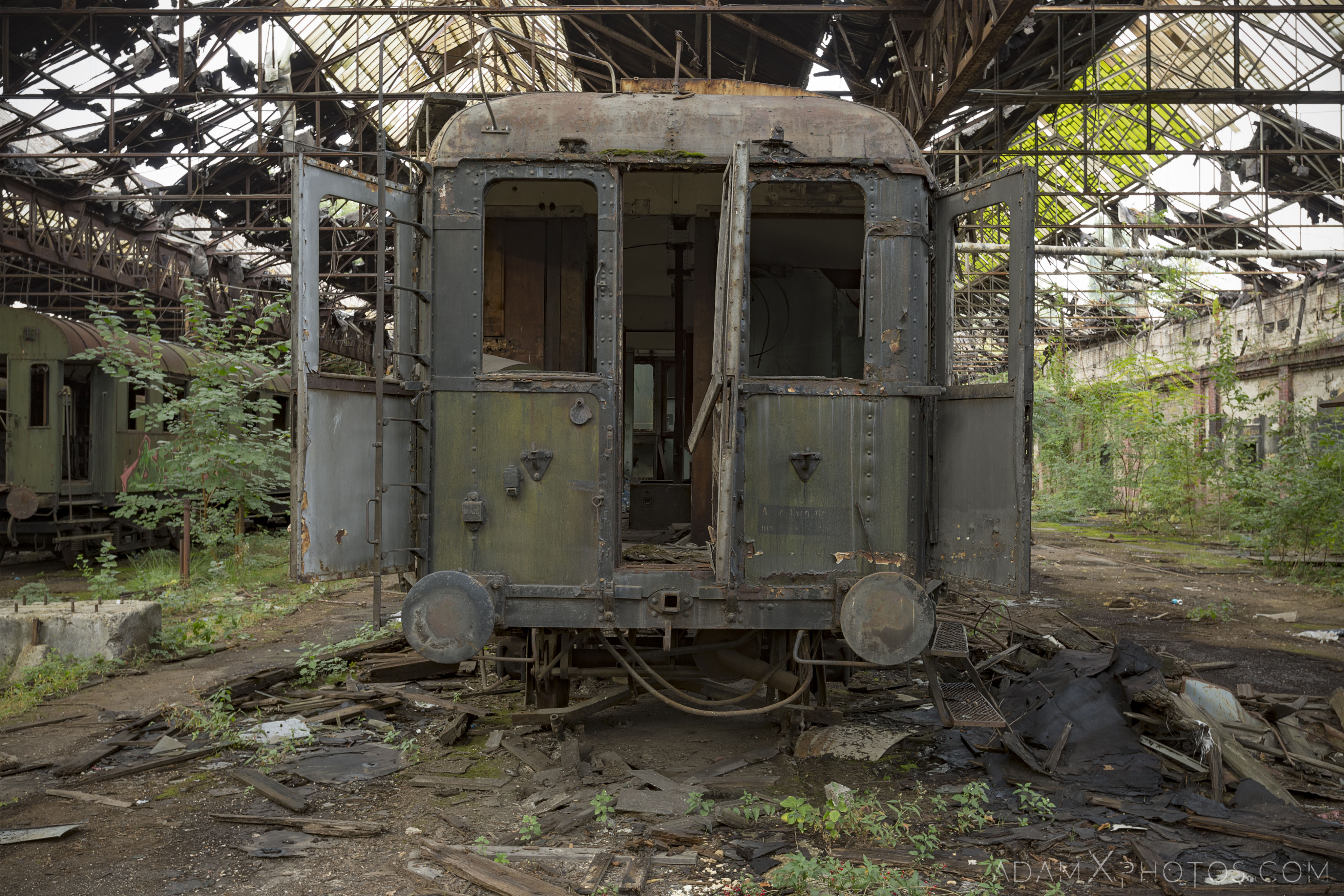 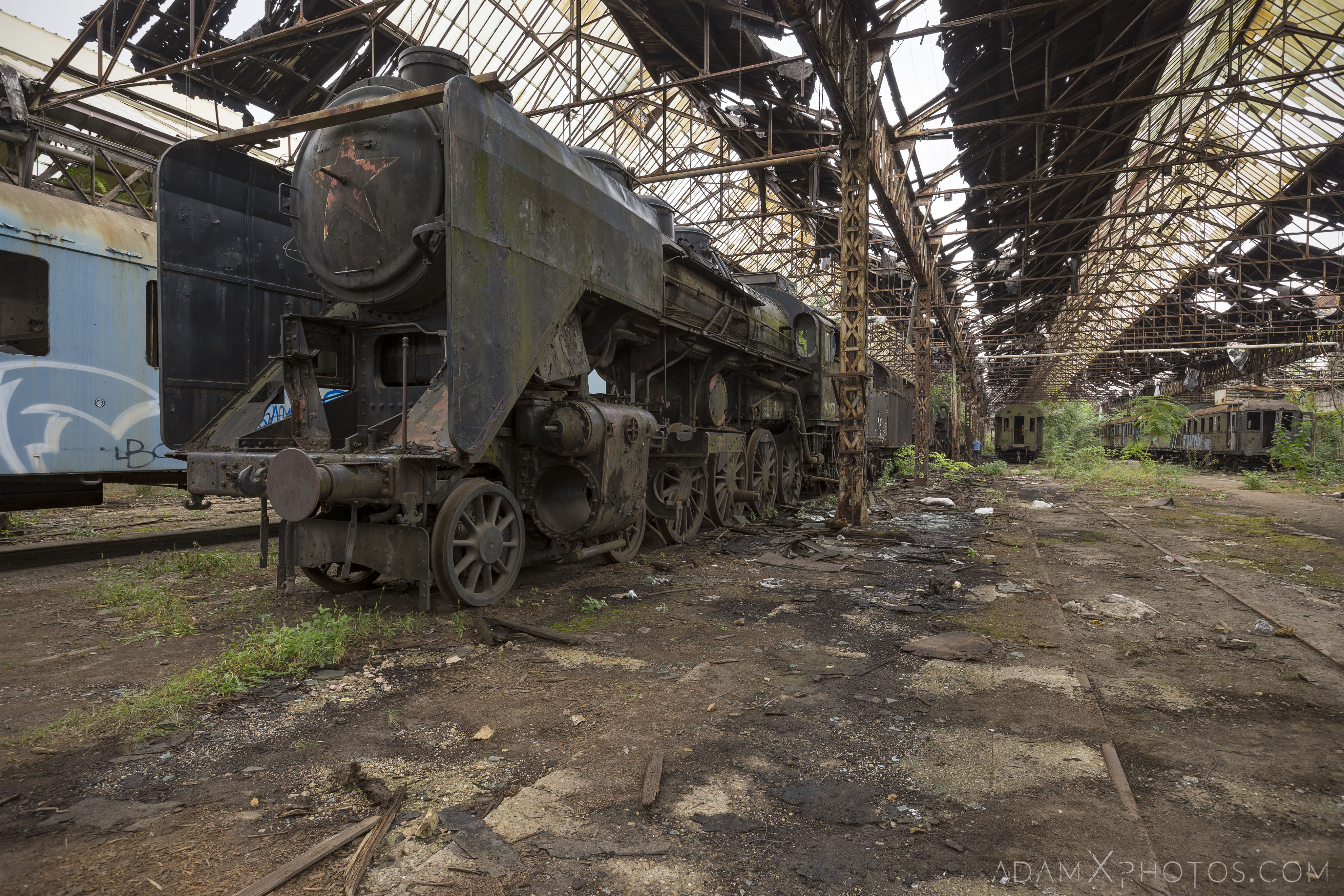 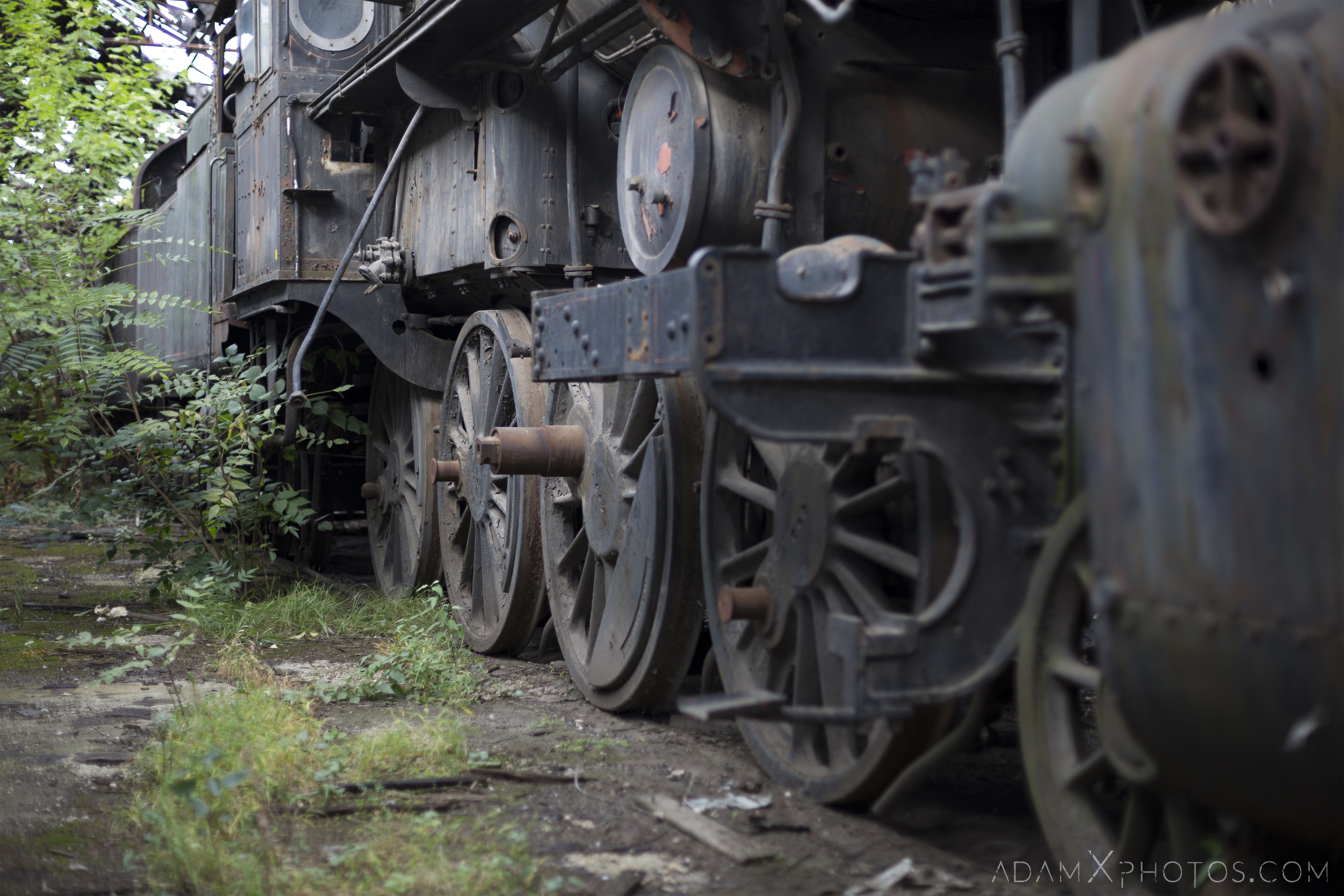 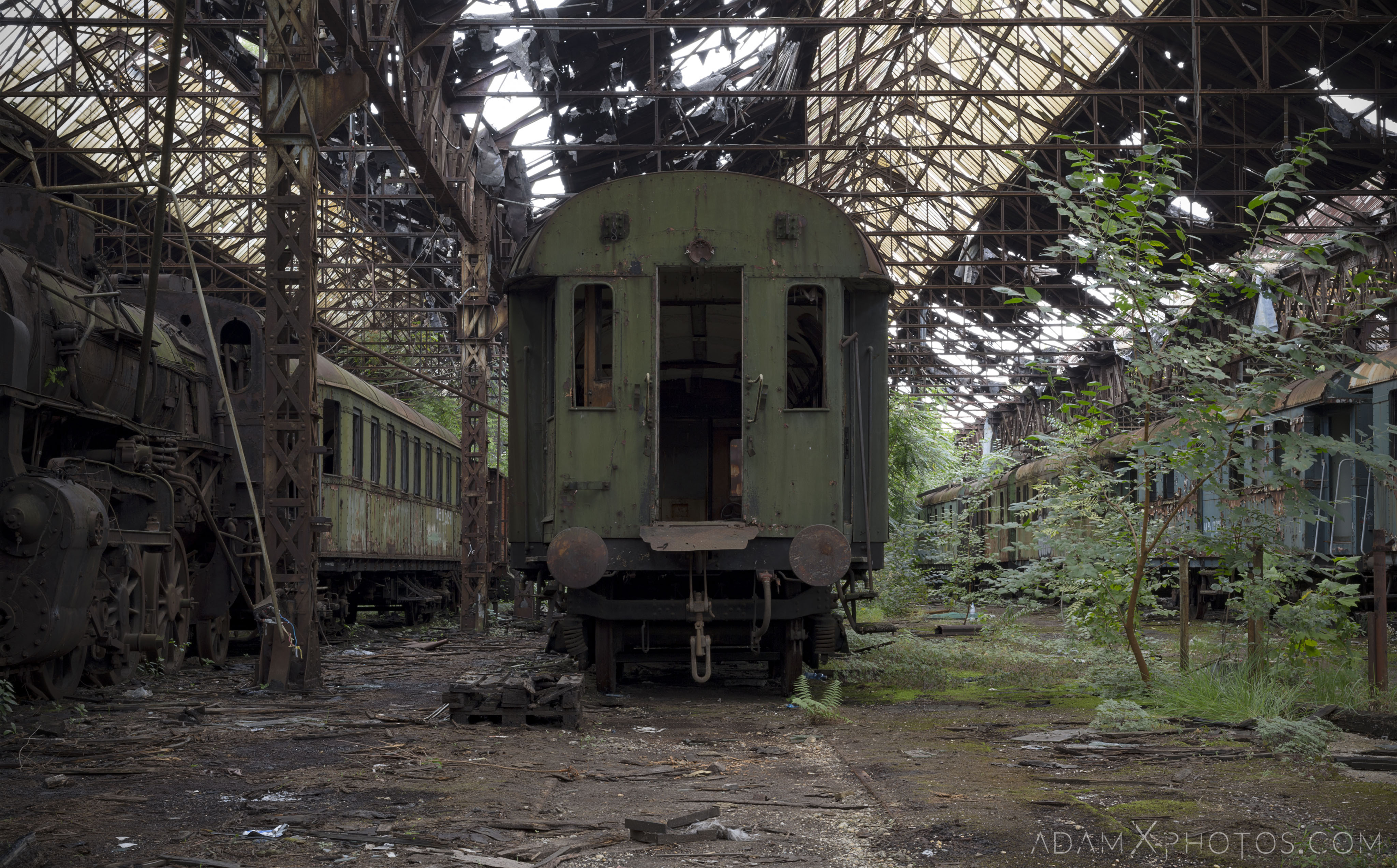 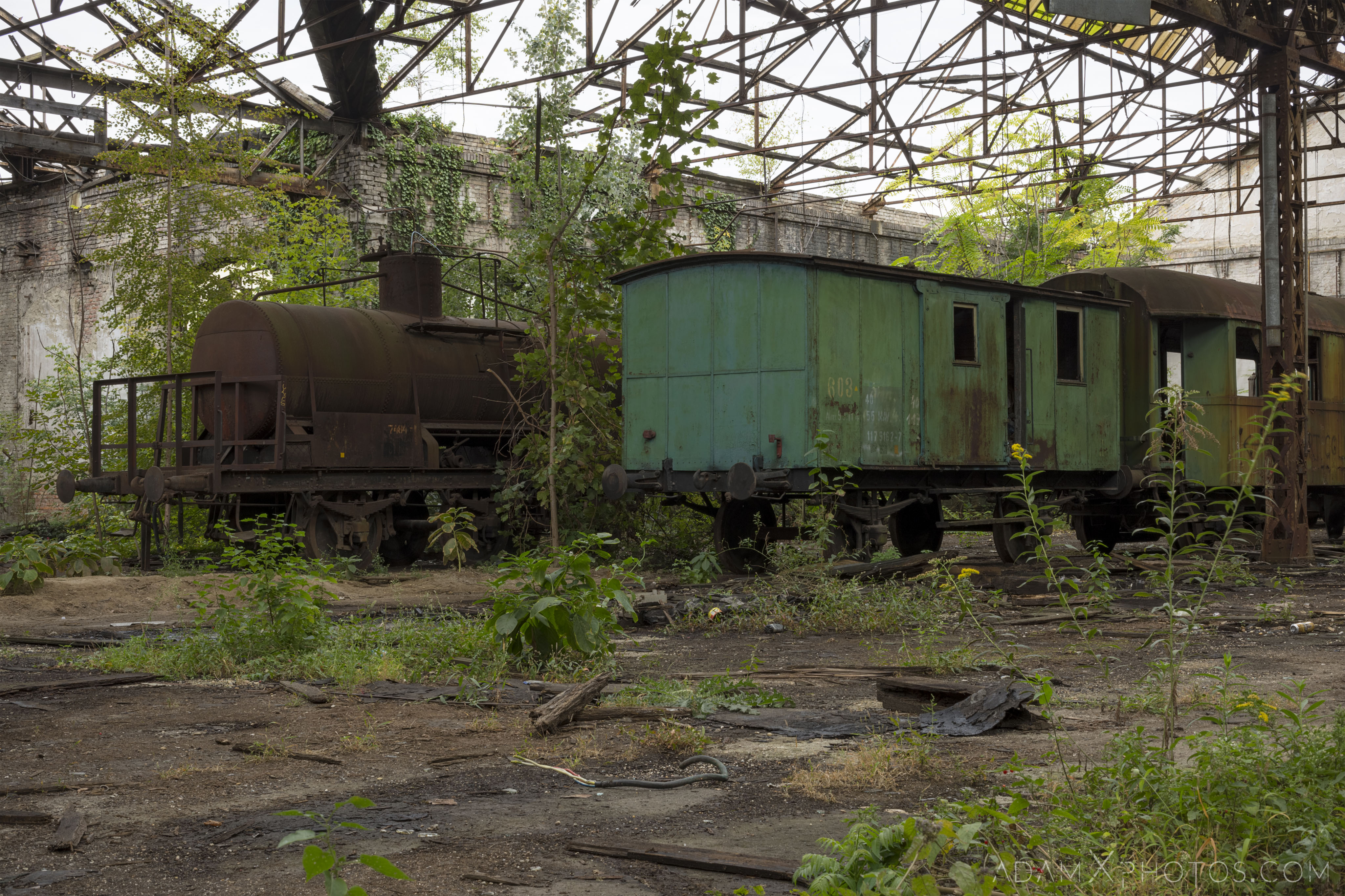 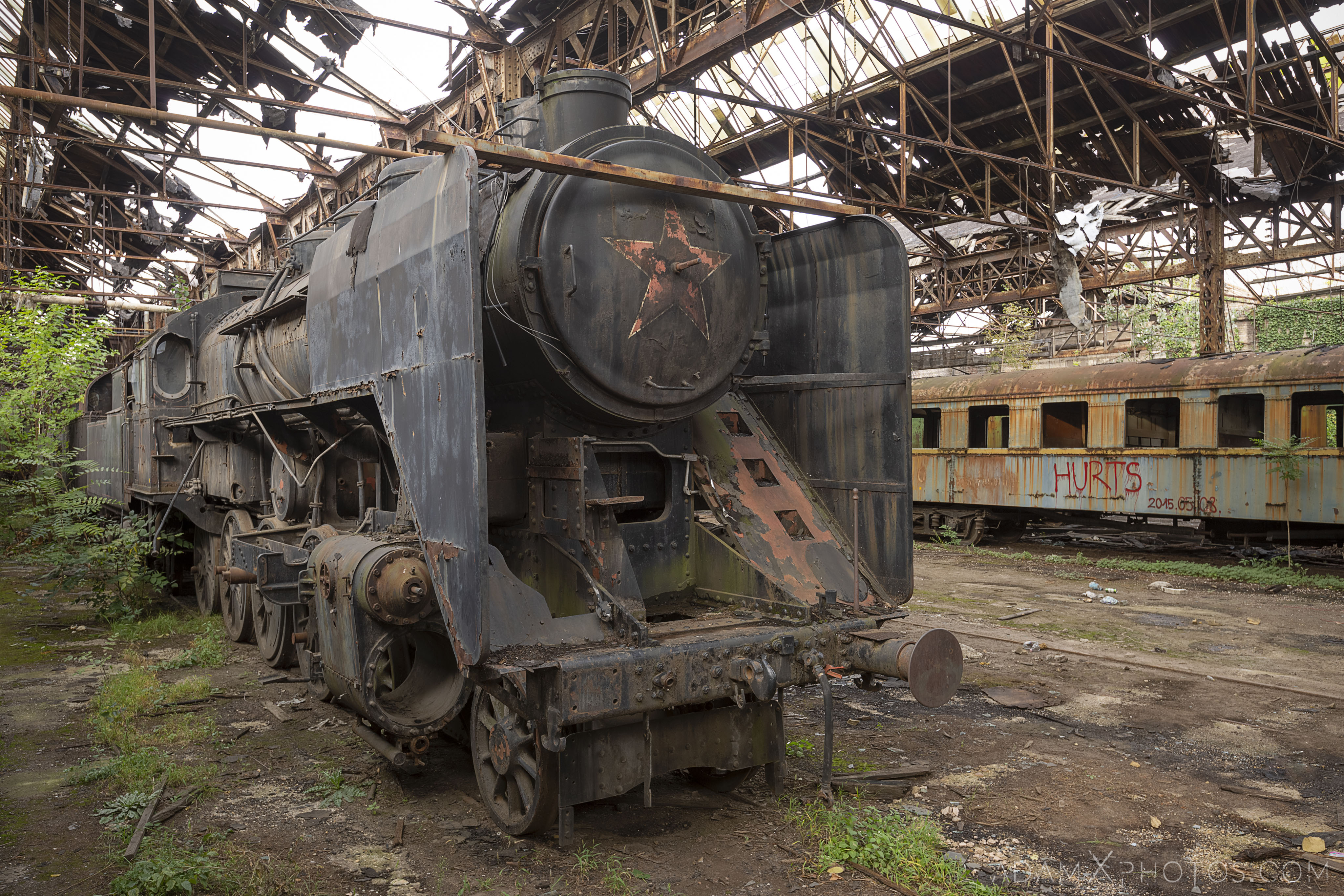 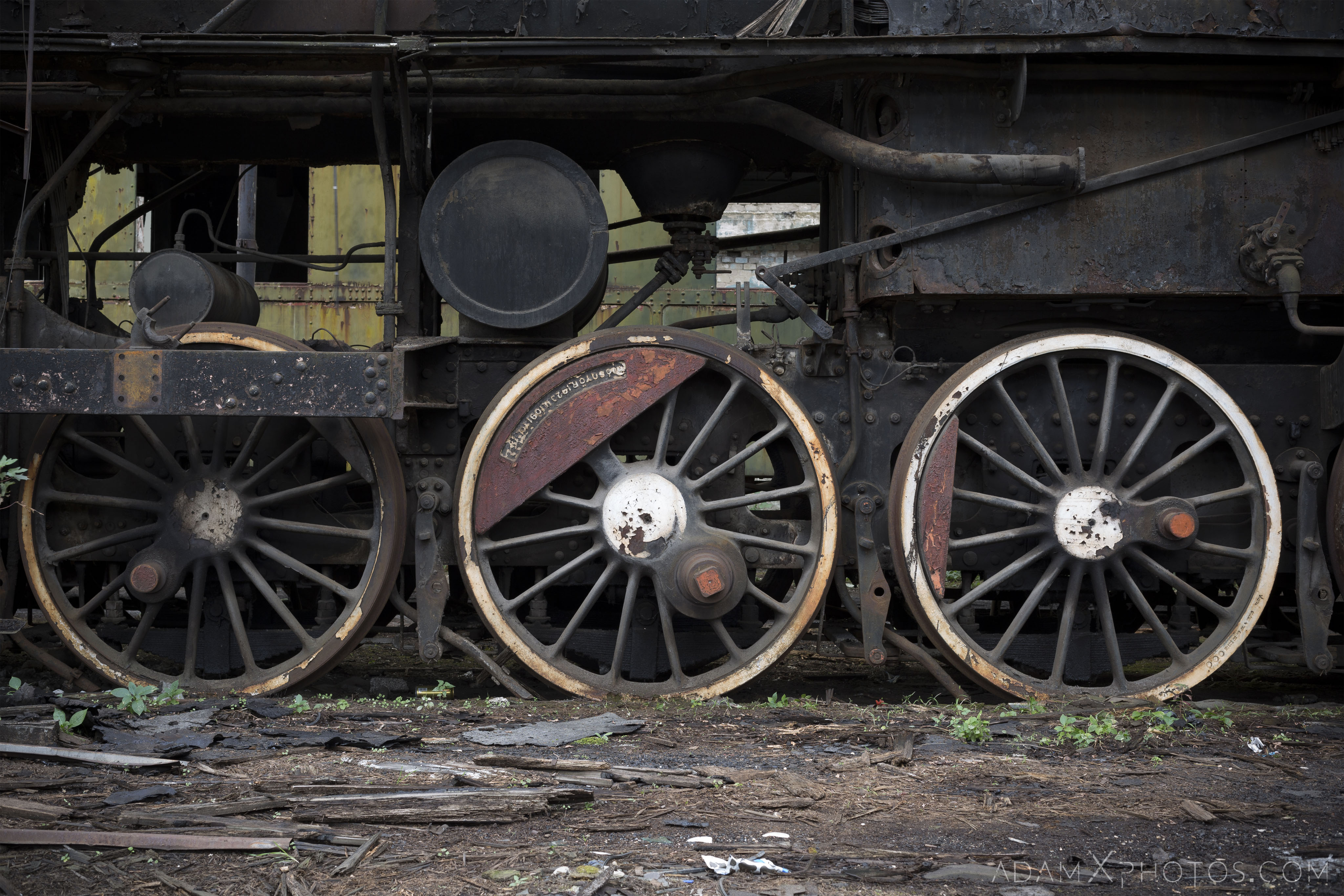 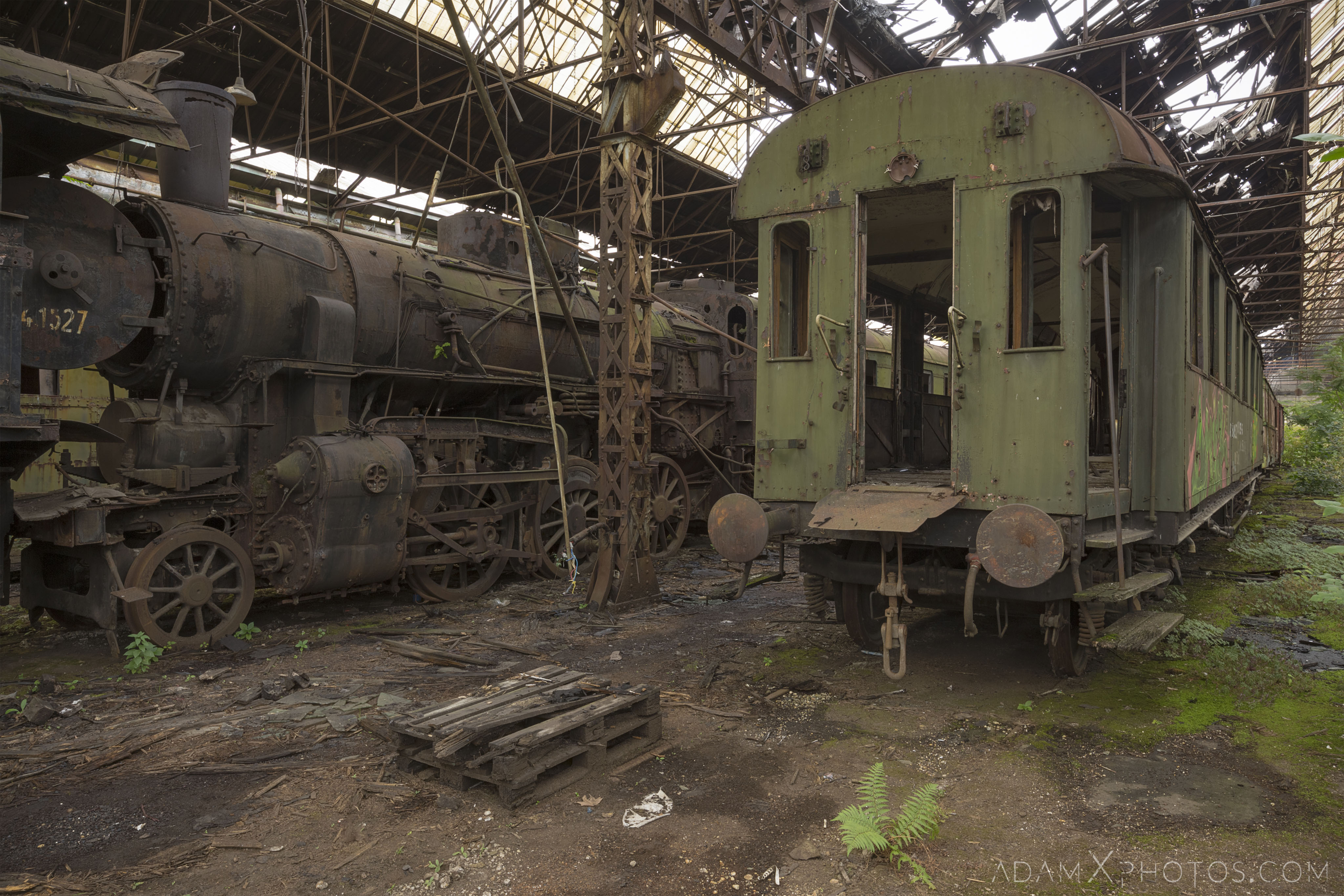 All too soon we had to make a hasty exit. It was a shame that we didn’t have a more relaxed or complete explore of more of the site, but I’m also glad that our visit wasn’t a failure, and I finally got to see the famous old locomotive for myself. I thought I’d finish this post with a slightly more grimy edit of that famous train… Thanks for visiting – it was loco
Adam X