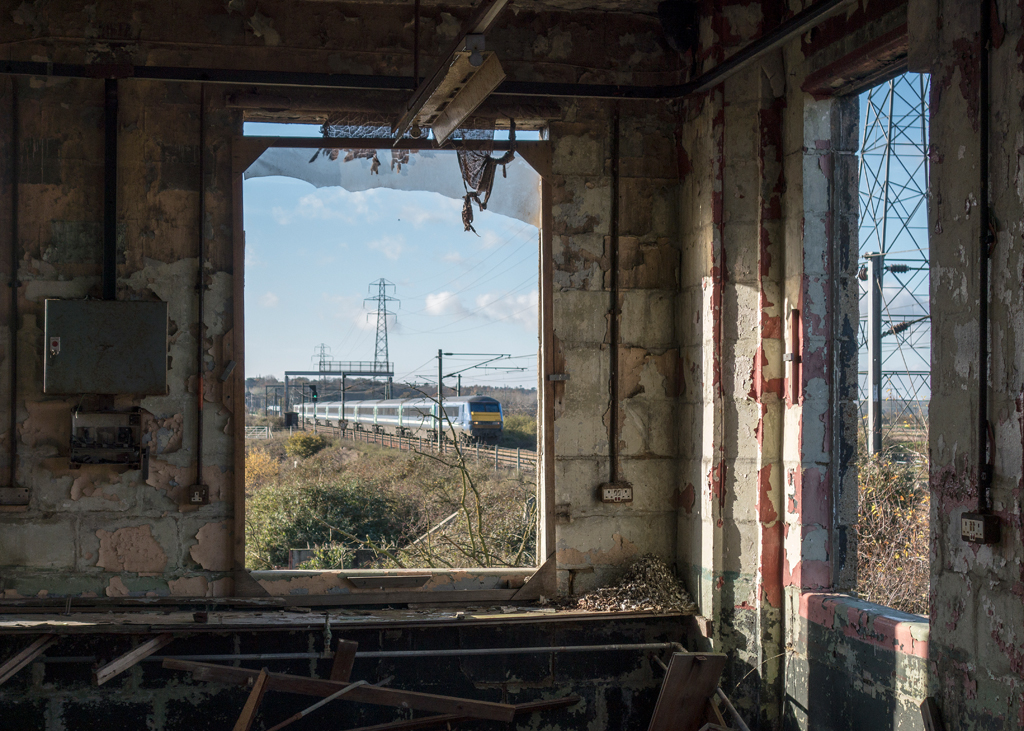 After getting busted by Michael at Severalls (see the epilogue to that report) our group of explorers decided to have a look around this old industrial site.

The site has certainly seen better days (not helped by a fire earlier this year), and is definitely in the “derp” category. However the company was excellent, the weather was gloriously sunny, and we were still able to find enough remnants of interest to get a few shots.

A brief history, as abridged and then expanded upon the entry in The National Archives website:

The British Xylonite Company could justifiably claim to be the first British firm successfully to manufacture a plastic material in commercial quantities. Xylonite, better known by its American equivalent of ‘celluloid’, was invented by Alexander Parkes and first displayed in 1862 under the name of ‘Parkesine’. Derived from the nitro-cellulose and collodion processes, it was initially used for making domestic articles in substitution for wood, horn, ivory or tortoiseshell. Its subsequent development was closely associated with Hackney, being taken up by Daniel Spill, rubber manufacturer, in 1864 and later by the Xylonite Company at Hackney Wick and the ‘Ivoride’ Works at Homerton High Street. The founders of the British Xylonite Company, Levi Parsons Merriam and his son Charles, established in 1875 a small business to make combs, imitation jewellery etc. next door to the ‘Ivoride’ Works; the two works merged in 1879.

The original site being small and unsuitable, it was decided in 1887 to buy land at Brantham on the Suffolk bank of the River Stour and erect a purpose-built factory; finished goods continued to be made at Homerton until 1897 when a new factory was built at Hale End near Walthamstow (its products going by the trade name of ‘Halex’) which also housed the head office. Other types of plastics were introduced, and in 1938 the British Xylonite Company became a holding company with three subsidiaries: B.X. Plastics making xylonite and lactoid; Halex Ltd. making finished goods, and Cascelloid Ltd. making toys and bottles at Leicester and Coalville. The Distillers Company took a half-interest in 1939 and bought the entire Group in 1961, but in 1963 it formed part of a new grouping called Bakelite Xylonite Ltd. established jointly with Union Carbide, and including plants at Birmingham, Aycliffe and Grangemouth.

Several sales and mergers took place in the 1960s and 1970s, the most significant being the sale of the Brantham and Aycliffe sites in 1966 to British Industrial Plastics, a subsidiary of Turner and Newall Ltd., who were in turn purchased in 1977 by Storey Brothers of Lancaster, formerly a major commercial rival. The Brantham site then operated under the name of Wardle Storeys and manufactured limited quantities of xylonite using traditional processes and equipment.

The site closed in 2007, and has since fallen into disrepair and dereliction, suffering extensive further damage in a fire in September 2013.

The site is currently owned by The St Francis Group, which in June 2013 submitted controversial plans to build 600 homes on the site.

Apparently the BBC is also doing a piece on the history of plastic manufacture at the site, which will be interesting to see when it comes out.

Anyway, on with the photos! …and get a group shot… (taken by and used with the kind permission of Unexposed Exploration.) I hear the train a comin’, it’s rolling round the bend, and I ain’t seen the sunshine since I don’t know when, I’m stuck in derphouse prison, and time keeps draggin’ on, but that train keeps a rollin’ on down to Manningtree.. Breaking Bad is without a shadow of a doubt my all time favourite TV drama, so I was absolutely made up to come across this stunning piece of artwork on the site of one of the old derelict buildings

“…you know the business, and I know the chemistry…” Thanks for looking, yo.