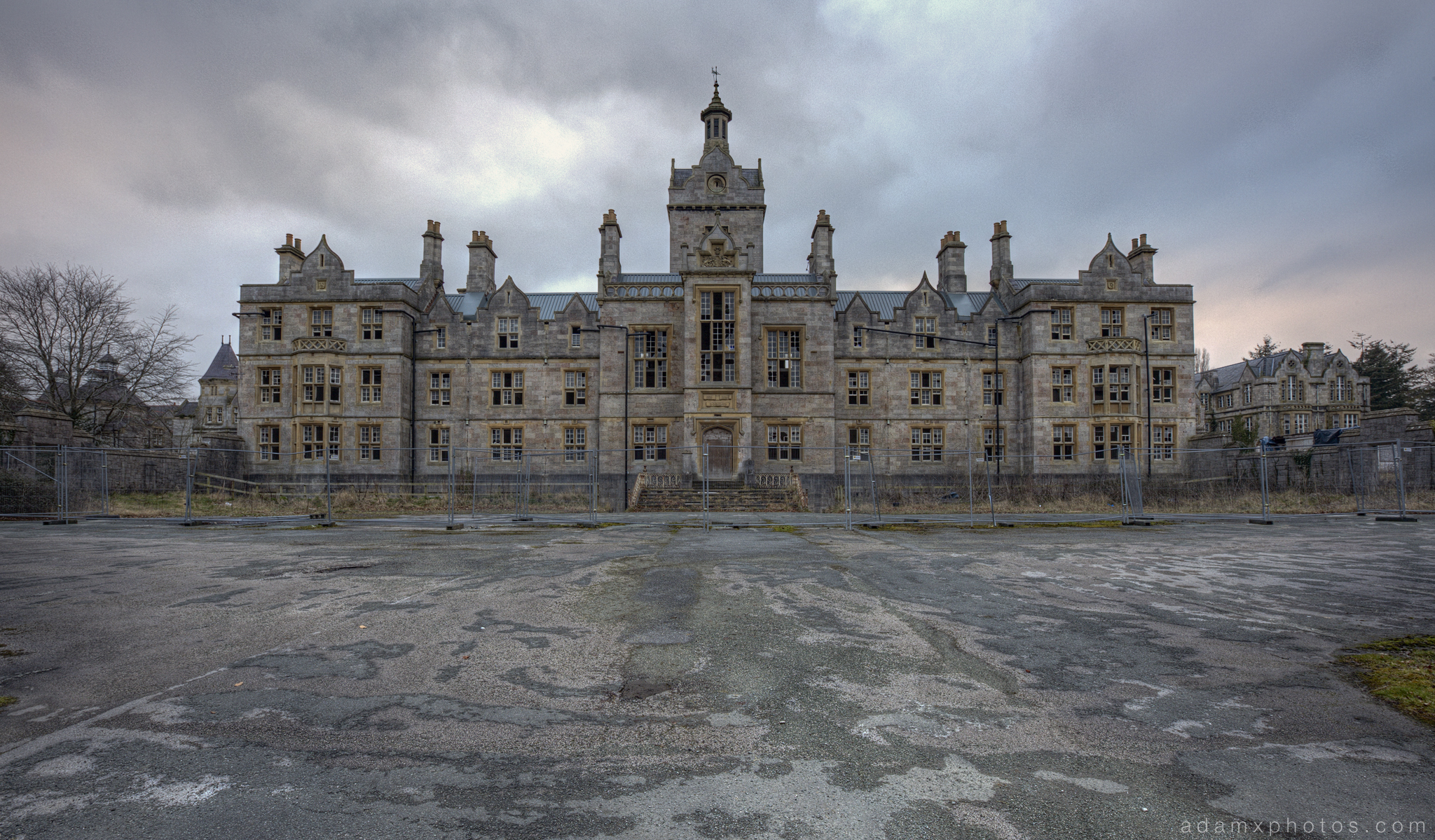 After an enjoyable pub lunch to rejuvenate our group from a long night and day of exploring, we ended the day with paying what was for me a long overdue visit to Denbigh Asylum.

History (abridged from here)
With the Lunatic Act passed in 1808 every county in the country was to provide an institute for the mentally ill, but by 1840 North Wales was still without such an institution because the poor rural communities could not afford to erect one. This meant that the most seriously ill pauper lunatics were sent to the English Asylums.

In October 1842 a group of local philanthropists in Denbigh held a meeting that called attention to the need of a Hospital for the Insane in Central or North Wales. In this meeting an anonymous donor (who later turned out to be Joseph Ablett of Llanber Hall) handed over 20 acres of land to the committee. However, the project faced a number of difficulties – the law did not support more than one county cooperating and building an asylum, and the other counties of Northern Wales did not want to help finance the project. However, through public subscriptions, the committee managed to raise £4,600, including donation from Queen Victoria and other royals.

Despite these problems, building of the Hospital started in 1844. The Hospital was constructed from limestone bricks produced by the Graig Quarry near Denbigh and was regarded as the finest structure of its type. The building work was completed four years later and opened on the 14th of November, 1848 and was able to house up to 200 patients. The clock tower was donated by Mrs Ablett in memory of her husband who donated the land for the Asylum.

The hospital was under ever increasing pressure to support its patients and relieve overcrowding, which led to a number of extensions occurring through out its life, with the most major extension work in 1899. This allowed the Hospital to house 1500 patients at its peak and offer a wide range of treatments.

In 1995 the hospital finally closed its door and has remained empty ever since, causing the buildings to degrade to a very poor state, even though they are Grade II listed.

Recently Denbighshire Council has pursued a Compulsory Purchase Order of the site, which has been appealed by its owners Freemont (Denbigh) Limited. The future of this once grand asylum remains uncertain.

Our Explore
This was an enjoyable couple of hours, although it’s sad to see that the site really is an absolute shell now. A catastrophic fire in 2014 seems to have been the final nail in its coffin.

We began at the back of the site, at the former chapel… …and the scant remains of the morgue. You can see the body fridge to the left, and the base of what used to be the autopsy slab in the back room to the right of the picture.

We then picked our way through the smashed remains of several buildings, before having a brief encounter with Elwyn, the self-appointed guardian of Denbigh. Famed for tearing around the site in his Land Rover, and giving short shrift to any explorers he finds, we were no different. “Stop buggering about” he shouted from his Land Rover. I decided not to debate whether or not travelling halfway across the UK to appreciate and document what remains of the asylum really constituted buggering about. After the coast was clear we resumed our explore of the rest of the site uninterrupted… We then climbed an old storage silo to take in this great view over the asylum – the climb was a bit nerve-wracking, but the view was worth it. …and we rounded off the day by grabbing a shot of the grand front of the main building, which is certainly the most photogenic part of what still remains.

And then it was on to our nearby hotel for the night, for much needed showers and well-earned beers!