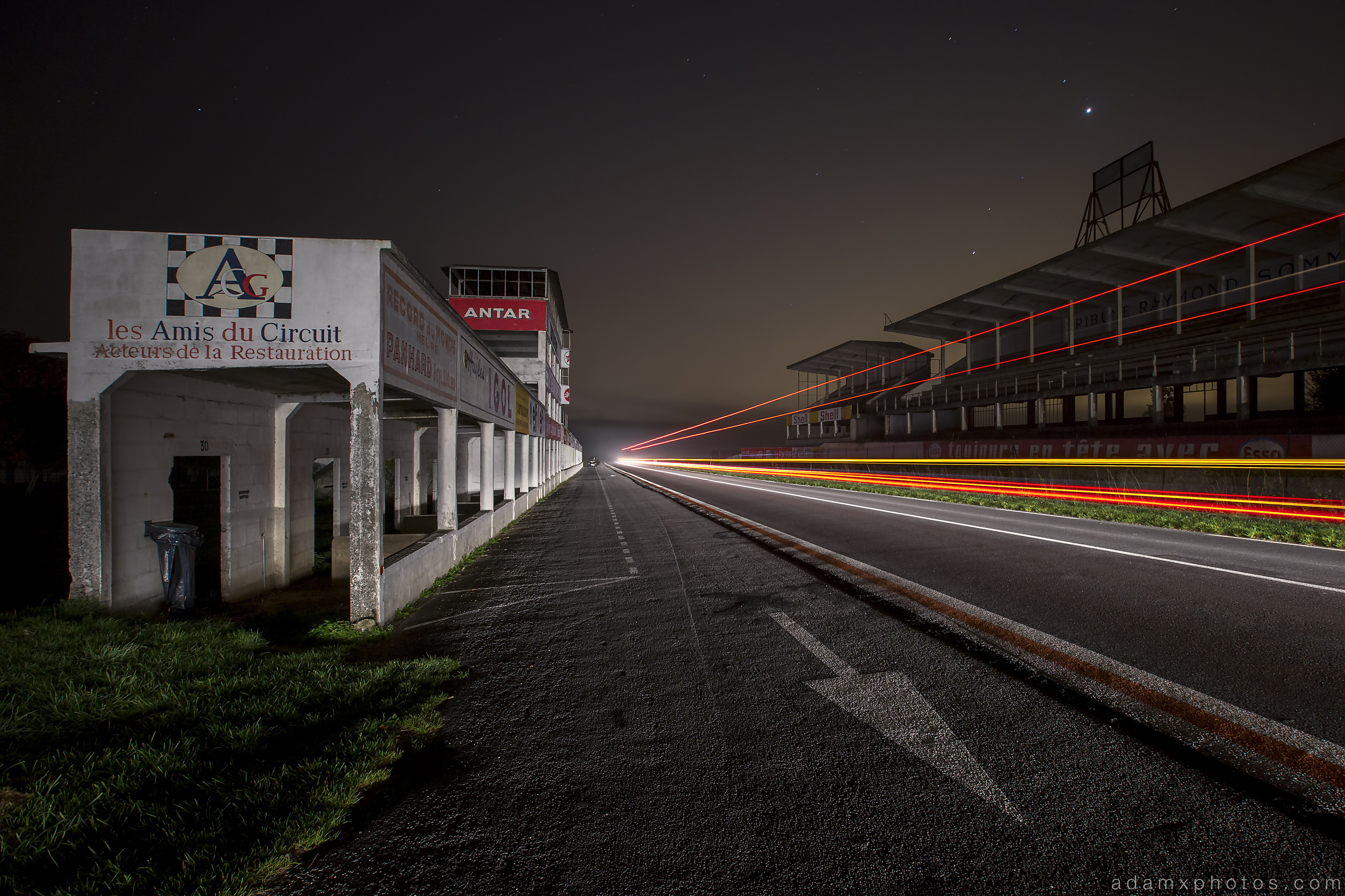 Explore #1 of ‘The Royal Variety Tour’

This was a great long weekend of exploring in France and Belgium. After rendezvousing on the outskirts of London, our gang (comprising my usual exploring buddy James and his girlfriend Jade, and our friend Mark from t’North) cruised down to the Eurotunnel around midnight after work on Friday night, and then continued the long drive through the night into France…

…at about 2am we broke up the journey by stopping over at the very cool derelict remains of a former formula one race track…. History (amended and abridged from wiki)
The circuit Reims-Gueux was a Grand Prix motor racing road course, located west of Reims in the Champagne region of north-eastern France. Established in 1926 the triangular layout of public roads formed three sectors between the villages of Thillois and Gueux, and became known as among the fastest of the era for its two long straights (approximately 2.2 km in length each) allowing maximum straight-line speed, resulting in many famous slipstream battles. The original 7.816 km had only minor improvements until 1938, which saw extensive widening of the Thillois-Gueux straight, making the circuit (now 7.826km) even faster. After the last pre-war editions of the French Grand Prix in 1938-1939, racing resumed in 1947 with the 16th Grand Prix de Reims. 1948 and 1949 saw the first Formula 1 cars at Reims-Gueux for two non-championship rounds. By then temporary grandstands were established fixtures at the Gueux / La Garenne and Thillois corners, and after hosting the sixth round of the inaugural 1950 World Drivers’ Championship it became clear that the circuit needed further extensive renovations to comply with the accelerating Formula 1 technology.

For 1952 the track was re-configured to bypass Gueux, shortening the circuit from 7.826 km to 7.152 km, after which it was renamed ‘Circuit de Reims’, or commonly referred to simply as ‘Reims’.

Improvements continued in preparations for 1953, the inaugural year of the 12 Hours of Reims series, including a track extension and new purpose-built intersection, resulting in a new preliminary circuit length of 8.372 km. The last major modifications were carried out before the 1954 season, re-profiling some corners to produce a shorter and faster circuit with a length of 8.302 km. 1966 was the final year for Formula One at Reims, sports car competitions were held until 1969, and motorcycle racing continued for another 3 years. In 1972 Reims-Gueux closed permanently due to financial difficulties. An historic race planned in 1997 was cancelled for technical reasons, and by 2002 bulldozers arrived to demolish some portions of the track.

A few sections of the old circuit are still visible today, particularly by the former pit lane. It is still possible to drive a lap around the (more or less) original 1926 version (through the center of Gueux) and the 1952 variant of the circuit. Les Amis du Circuit de Gueux (a non-profit organization) is working to preserve the old pit building, grandstands and other remaining structures of the circuit.

It was great fun wandering around in the dark, setting up long-exposure shots, and waiting for the occasional car or lorry to rumble past. The only downside was that it was absolutely f-f-freezing! How it looked back in the day… The remains of the main stands, lit by the tail lights of a passing car. Soon it was time to get back in the car, try and defrost, and head on to our next target – a dawn raid on some old war planes! The report from there is coming up very soon.

Thanks for the pit stop.
Adam X