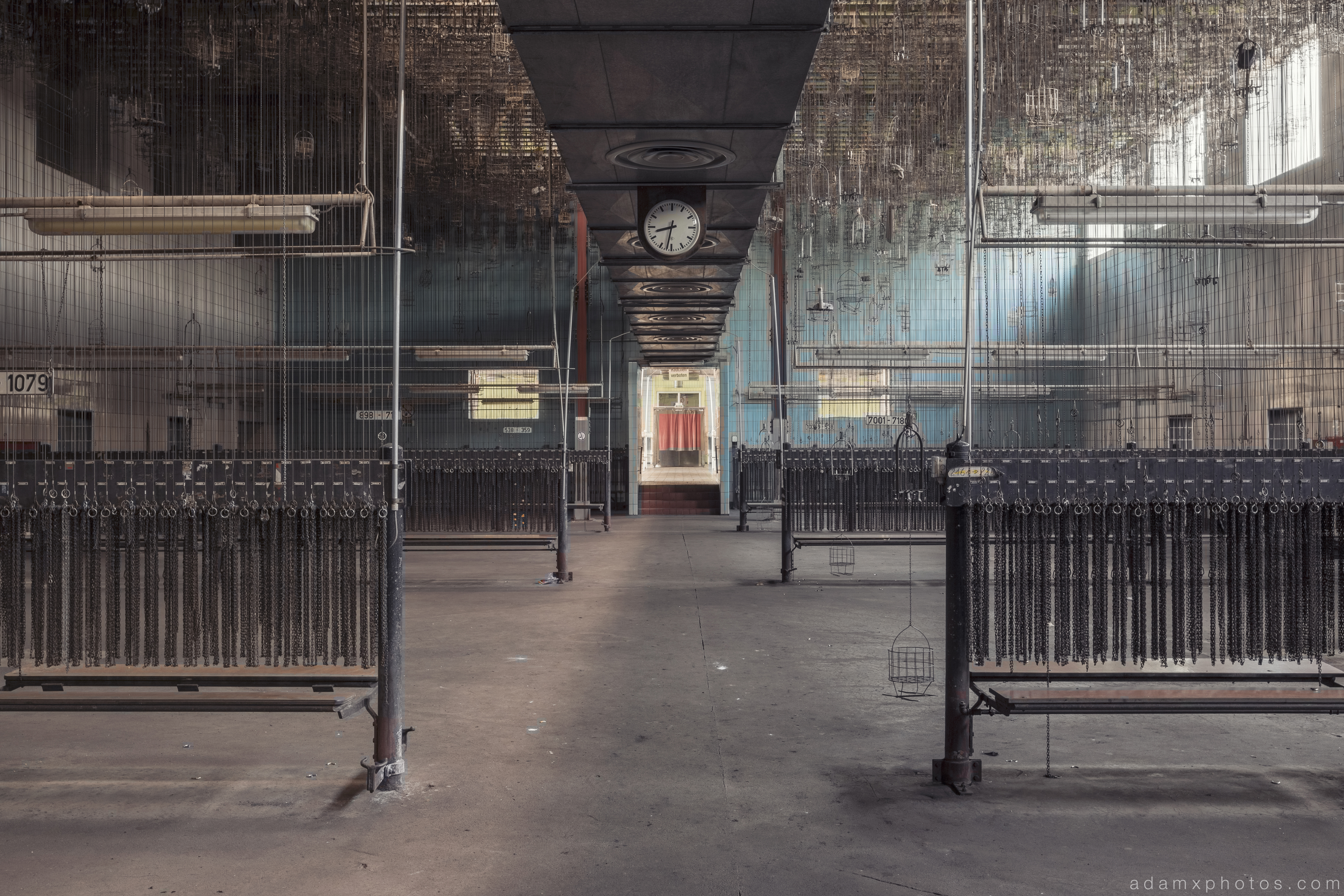 Explore #3 of ‘The Smell of Cheap Cologne Tour’

It was a pre-dawn start on Day Two of our German weekender as we knew our next target had active on-site security patrols, and the cover of darkness (or at least very first light) always helps improve the odds! 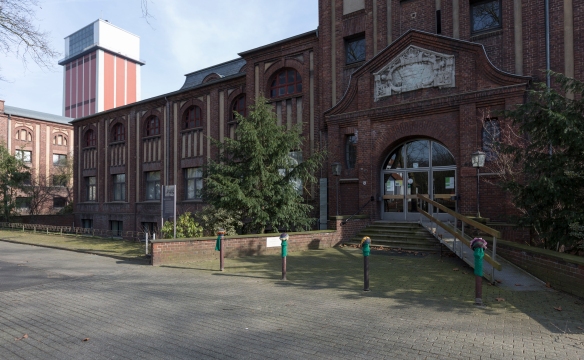 History
I can’t give away any specifics about this location – its beginnings can be traced back to 1860s, and grew during the 20th century to be a very large and important coal mine. At its peak it produced upwards of 2,500,000 tonnes of coal per annum and had over 8,000 employees. Ownership was disrupted, changed hands, and was disputed as a result of both world wars and the period in between. The mine eventually closed in the early 21st century, and is currently in the process of being demolished.

Our Explore
This was our top target for the weekend, and therefore the one which we were most anxious of failing at. We silently made our way onto the site, and it immediately became apparent that the demolition of many of the buildings had progressed rapidly during the preceding weeks and months. Sadly we were unable to access the huge headstock and its winding gear, as all routes in appeared to be either demolished, freshly sealed with plate metal sheeting, or would involve the sort of serious risk to life that I’m simply not prepared to entertain in the name of a hobby and photographing a few pretty pieces of old machinery!

After diving into the shadows and narrowly evading a security patrol we made our way to the main worker and administration buildings which housed the spectacular ‘kaue’ and a grand reception/ballroom used for entertaining and showing off to visiting dignitaries. We had a great couple of hours with the entire place to ourselves, spending most of the time in the huge ‘Weißkaue’ and ‘Schwarzkaue’ changing areas. In case you missed my explanation of how these cages systems worked in my recent Zeche P report, here is is again:

The mine changing rooms for the workers were filled with hundreds of ‘kaue’ (cages/baskets) each of which was suspended on a chain and assigned a specific number and worker, who would store their clothes in the basket before hoisting it up to the ceiling and securing the chain with a padlock. The ‘waschkaue’ (washrooms) at this mine were divided into three sections: the ‘Weißkaue’ (white room) used for workers in their street/non-work clothes, a shower area, and then the ‘Schwarzkaue’ (black room) for changing into and from the filthy work clothes used in the mine.

Cages in one of the smaller Weißkaue changing areas… 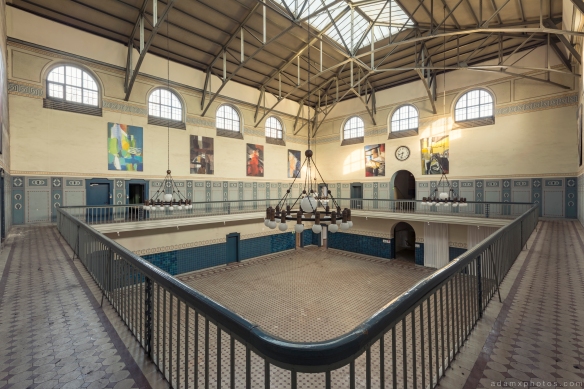 We then walked through an unassuming door in a dark corridor to find this: the main ‘Weißkaue’ (white room) – wow! 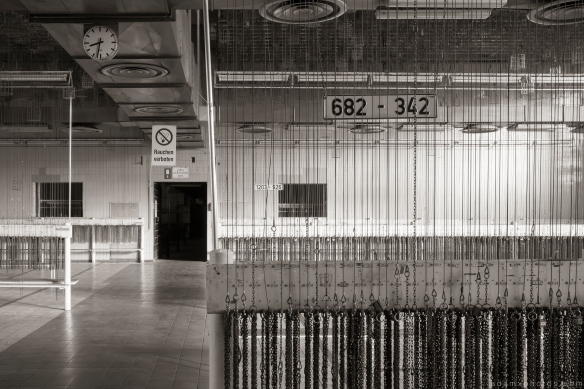 Entering the equally huge Schwarzkaue, aka the dark side! 😉 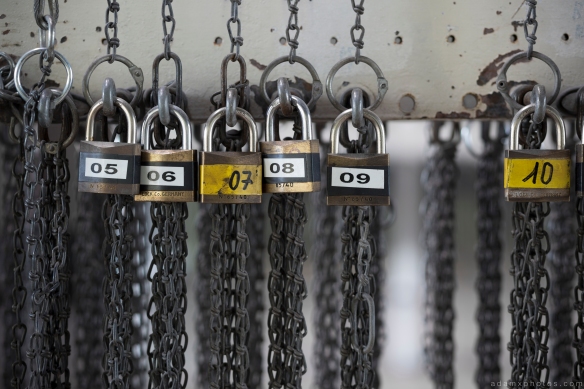 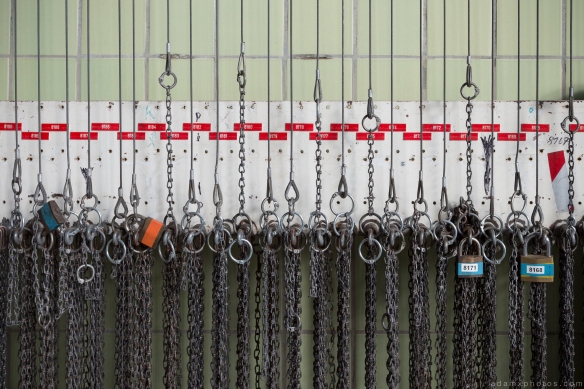 Then back to the black room again… 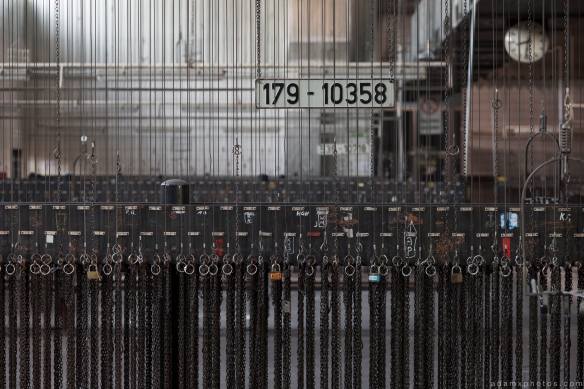 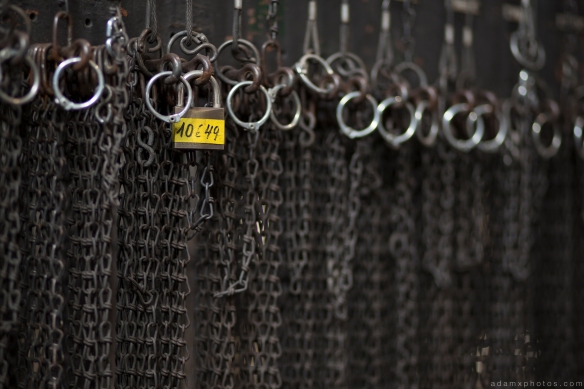 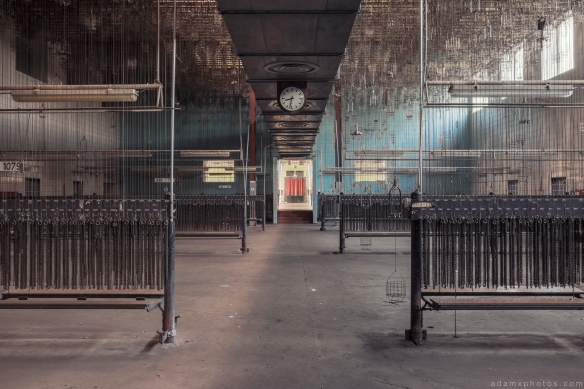 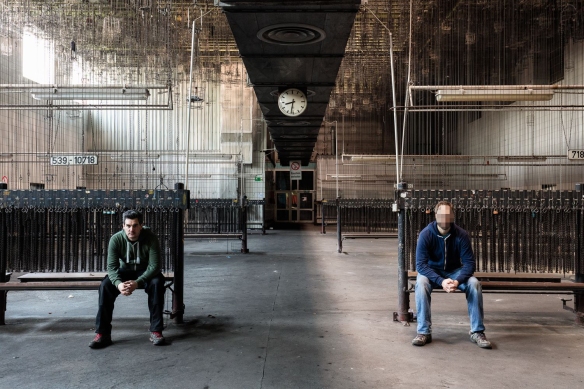 …so we grabbed a quick team shot (by James)…

…and one from the front after we’d made our way out.

Back at the car we enjoyed a late breakfast which was particularly memorable when we realised that the cans of energy drink which we’d just drunk tasted weird because they were some crazy hybrid beer and energy drink mix!

Luckily the alcohol content was low enough that it wasn’t a problem James driving on to our next location – we were headed for Belgium and a beautiful disused textile factory… report from there coming up soon!