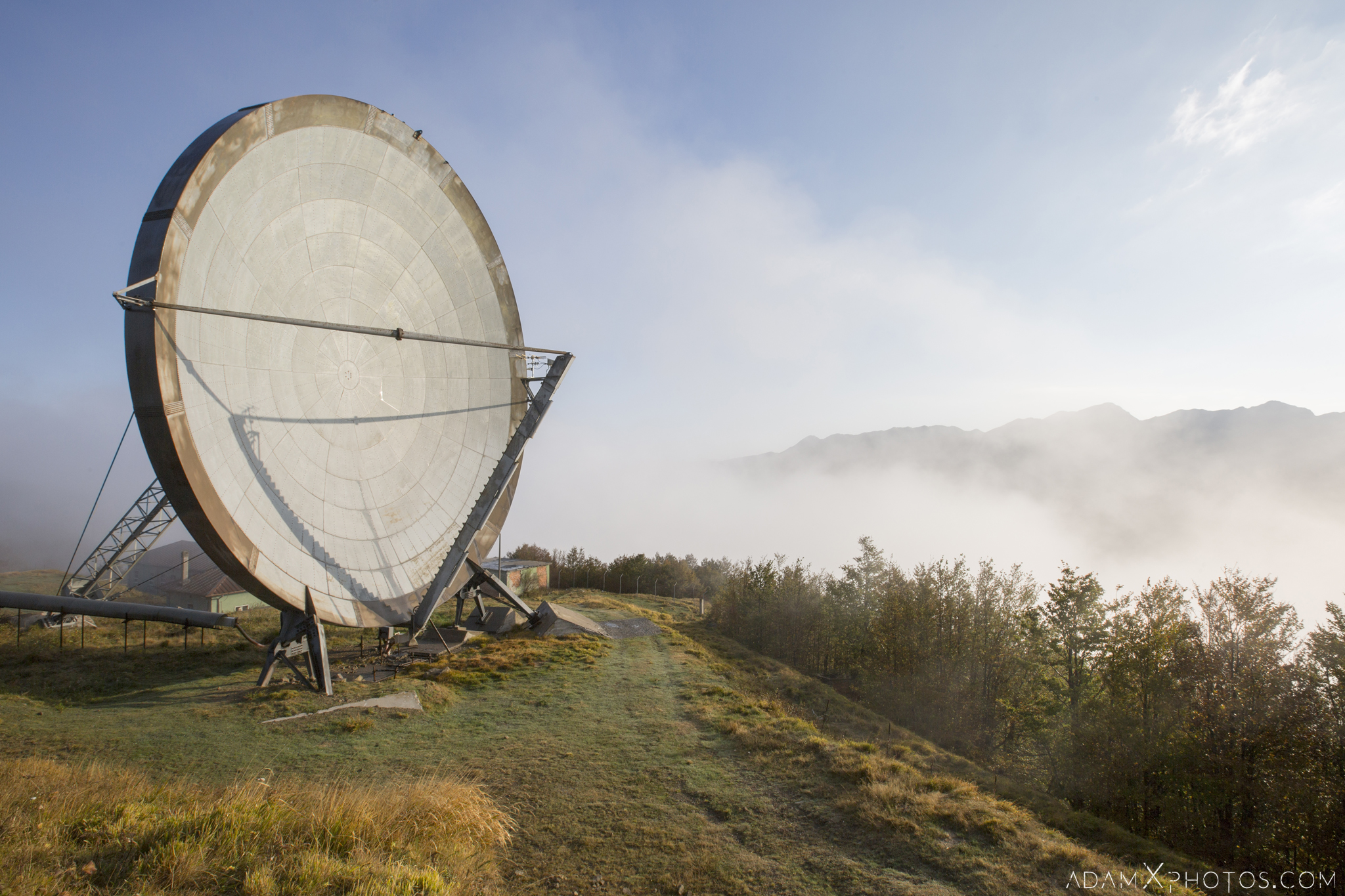 After exploring Oculus Tower, we unfortunately failed on our next couple of targets. We then headed high up into the mountains to this disused former NATO communications facility with a silly urbex codename, where we also planned to camp for the night.

History (translated and rewritten from here and here) 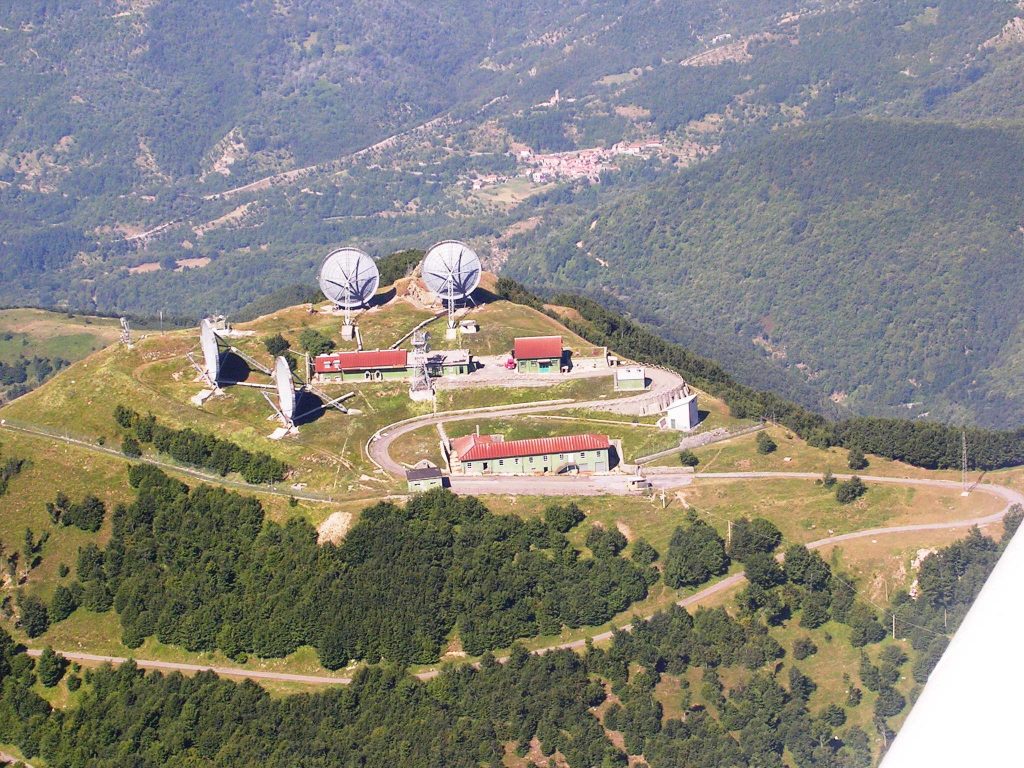 Dating back to 1956, the ‘over the horizon’ system used microwave radio to communicate over large distances, stretching nearly 4000km from the far north of Norway to south-east Turkey.

The closure of the network began in the early 1990s when satellite communications took over, with this station closing in 1994.

Following closure the site lay derelict and vandalised for many years. However, since around 2005 the management of the area (still military) has been granted to a group of paramedics, the ‘ARI and Scatter Group’. Despite the obvious logistical difficulties their aim is to redevelop the site and create a museum preserving its structures and equipment. They hope to preserve the 4 gigantic paraboloids of 20 meters in diameter, putting them into operation for civil purposes – two are already in operation. The site has been reconnected with electricity, and wifi/ADSL network connectivity added.

However, over a decade since they first took over the site it still lies largely disused and unnoticed, its future far from certain.

Our Explore
As with most of this trip things didn’t go particularly smoothly with this location!

The first issue was when my trusty Australian-voiced satnav Bruce got all confused and tried to take us up what turned into an impassable logging track! We eventually managed to get the car back down and redirected to the proper road up to the station.

Unfortunately, that road hadn’t been maintained since the station had closed, and around halfway up we came around a bend to find a massive hole which was impassable in our non-4WD estate car. But we weren’t about to be beaten that easily, so we set to work foraging old tree branches and rubble to try and fill in some of the crater. After half an hour or so we had eventually fashioned enough of a makeshift ramp for Dan (the lightest) of our group to drive the car up and over, whilst the rest of us stood by the side shouting directions for exactly where the wheels needed to go. Our elation at this victory was muted though, as we were convinced that we’d round the next hairpin bend to find even worse road damage. Thankfully this wasn’t the case, and we finally made our way to the summit way past our planned arrival time just as the last of the light was fading. 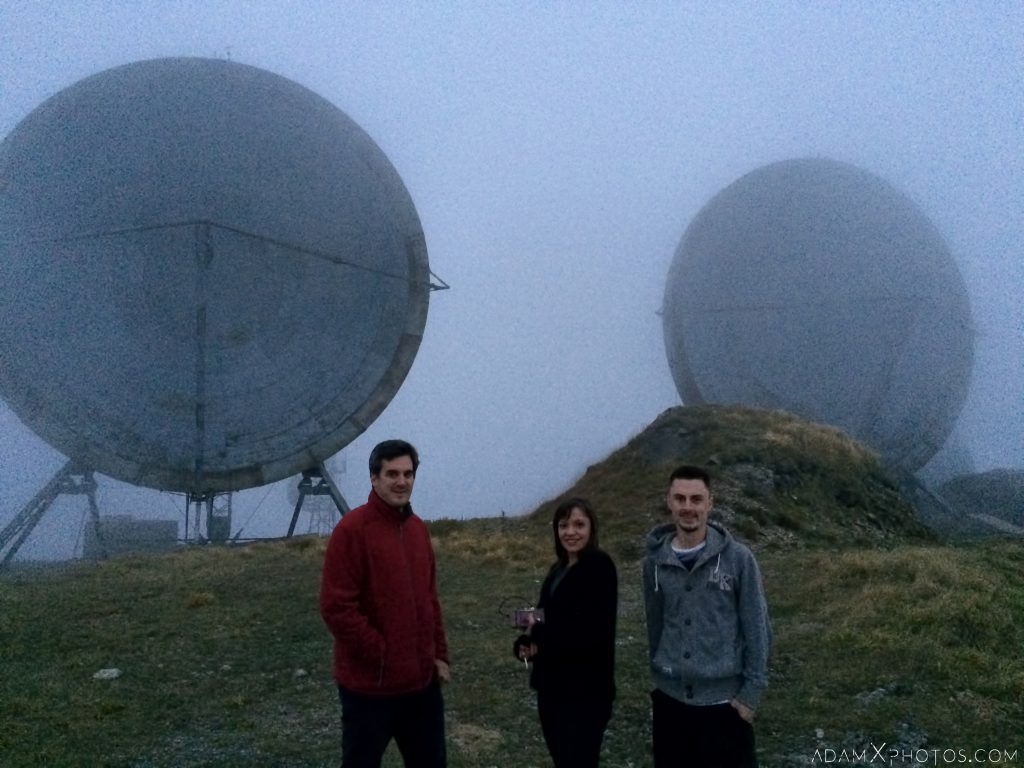 We wasted no time in getting our €20 tents set up, sheltering beneath the huge 20-metre parabolas, and then turned our attention to building a fire and cooking dinner. Luckily there was plenty of rubble to build a firepit, and dead overgrowth for fuel. 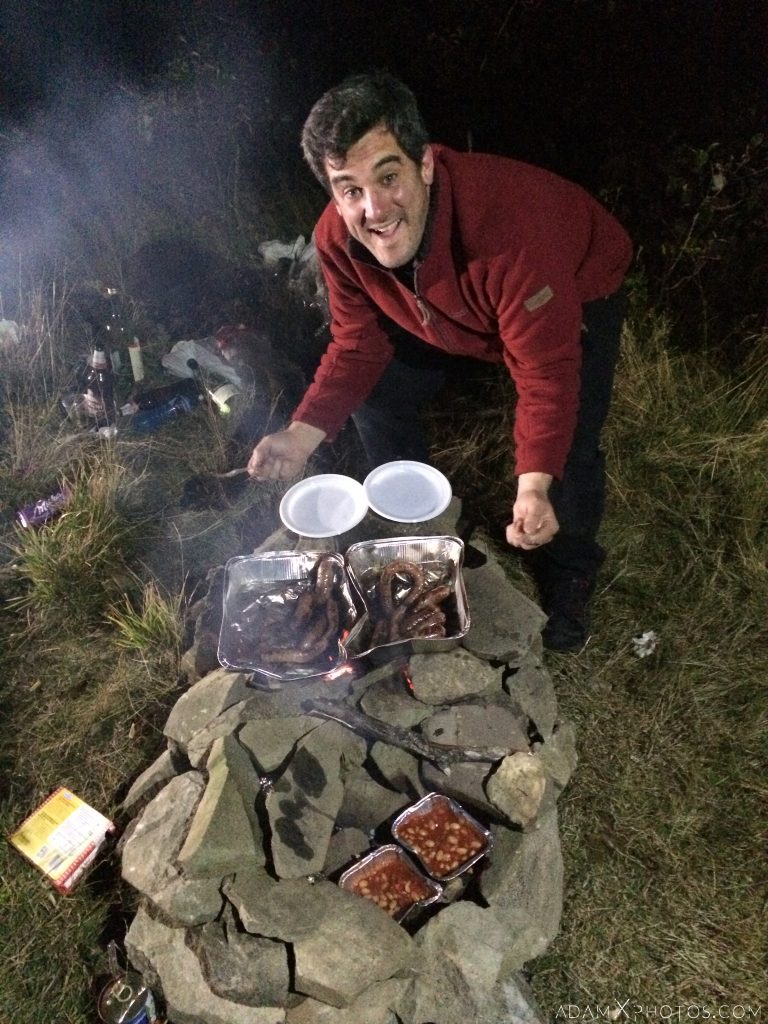 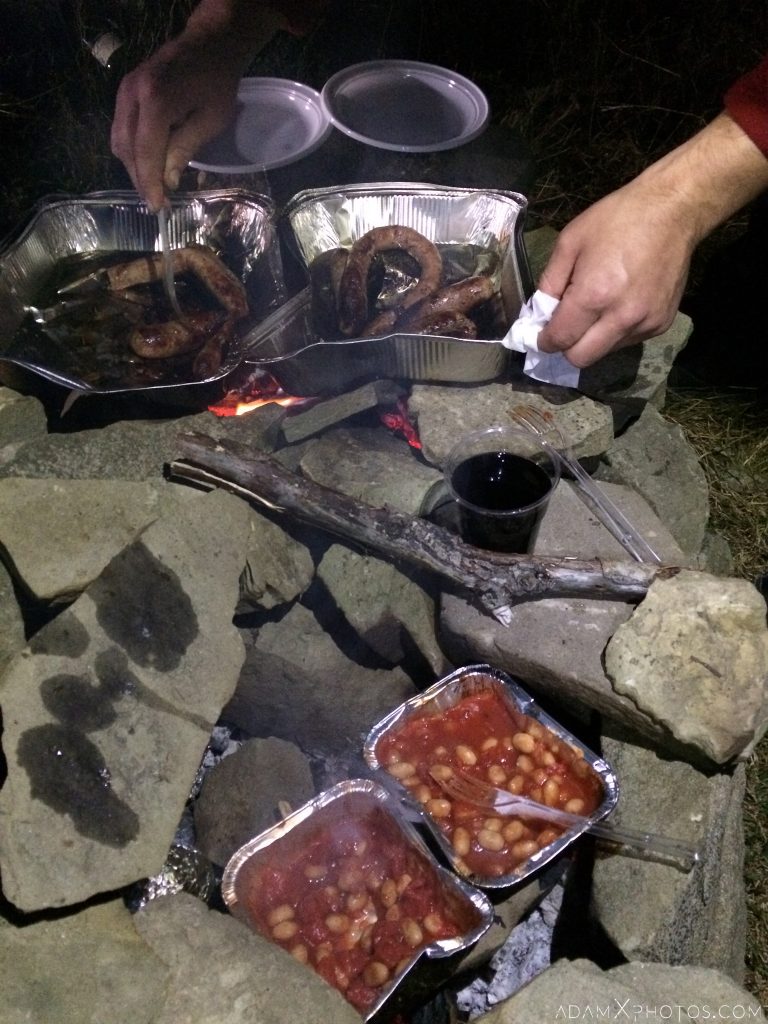 They didn’t have baked beans in the Italian supermarket, so we made our own using tinned tomatoes, borlotti beans, and some seasoning – and it tasted amazing! 🙂 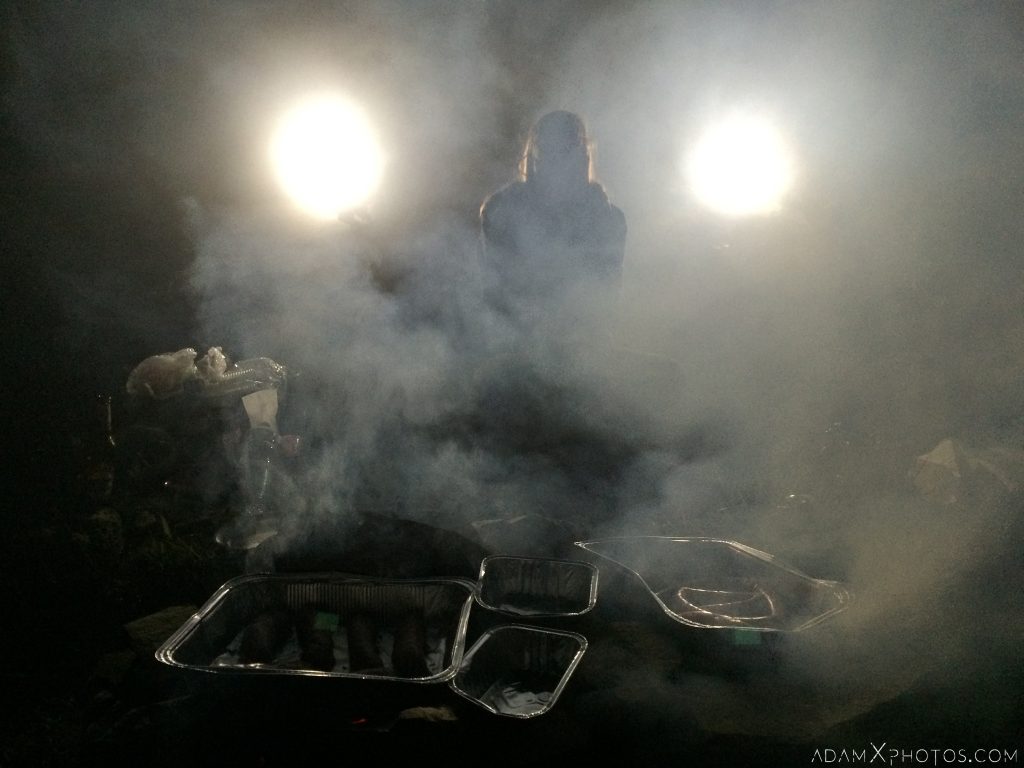 A tipsy Jade through the campfire smoke.

It took forever to cook dinner on the fire, but spirits were high as we enjoyed a well-earned drink. The stars began to come out, and the plan was to do some night photography once we’d eaten. Sadly, just as we were finishing a massive storm blew in and the heavens well and truly opened. 🙁 We took shelter in the porch of one of the buildings, and carried on a rather chilly party for an hour or so before heading to our tents.

That night was one of the coldest and most uncomfortable I think I’ve ever spent. Despite wearing every piece of clothing I had in the tent (about 5 layers, including thermals, hat, hoodie etc) I woke shivering every half an hour or so, my side numb from the unyielding ground beneath. I honestly think that hypothermia can only have been a few degrees away.

I awoke at very first light, cold, knackered and rather grumpy. Dan and I were the first out of our tents. We were still surrounded by cloud and could hardly see a thing. But then suddenly there was a break in the white all around us, and we caught a first tantalising glimpse of the stunning view. Our moods immediately soared, and we rushed back to grab our cameras and tell James and Jade to get up. 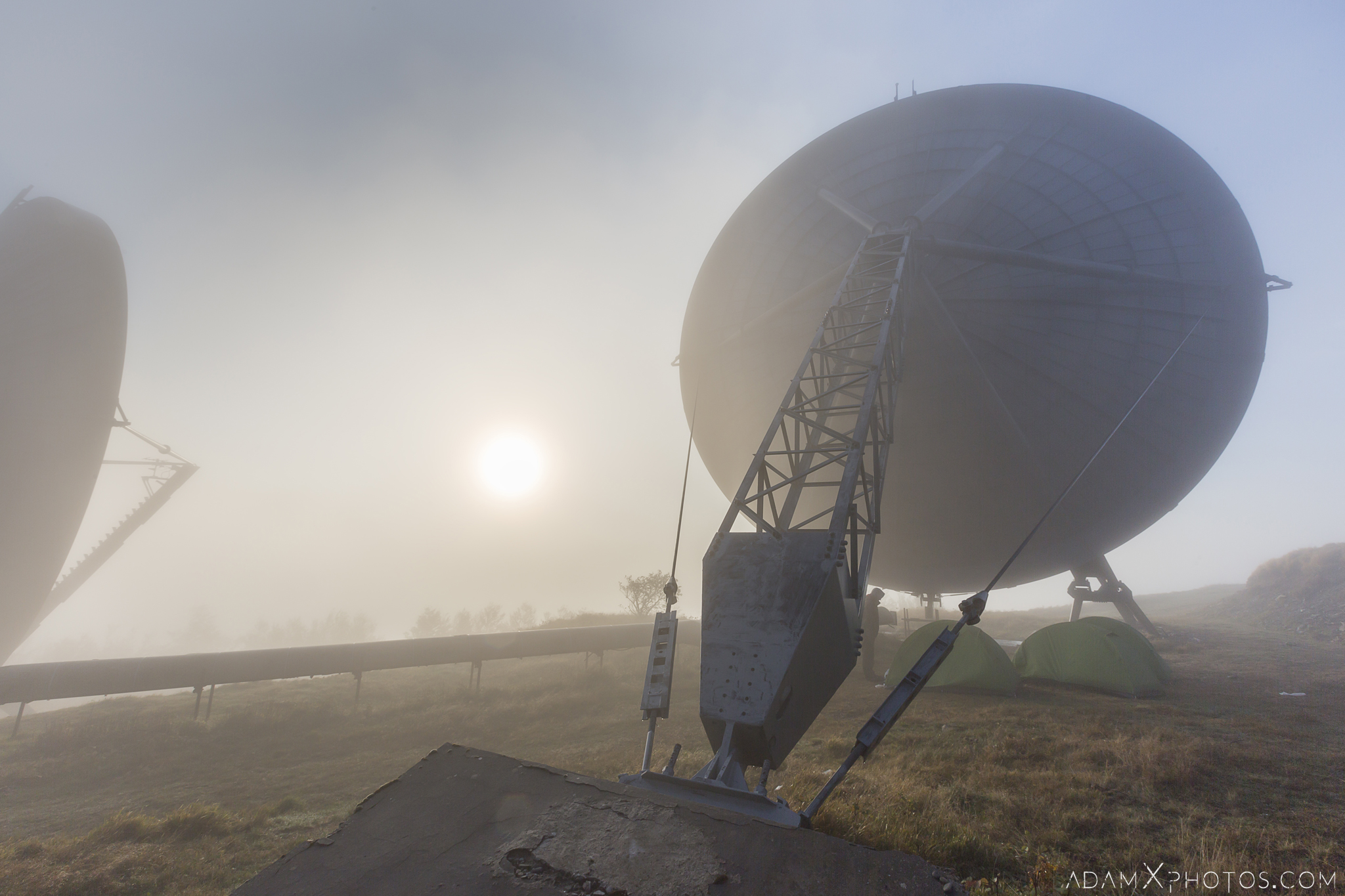 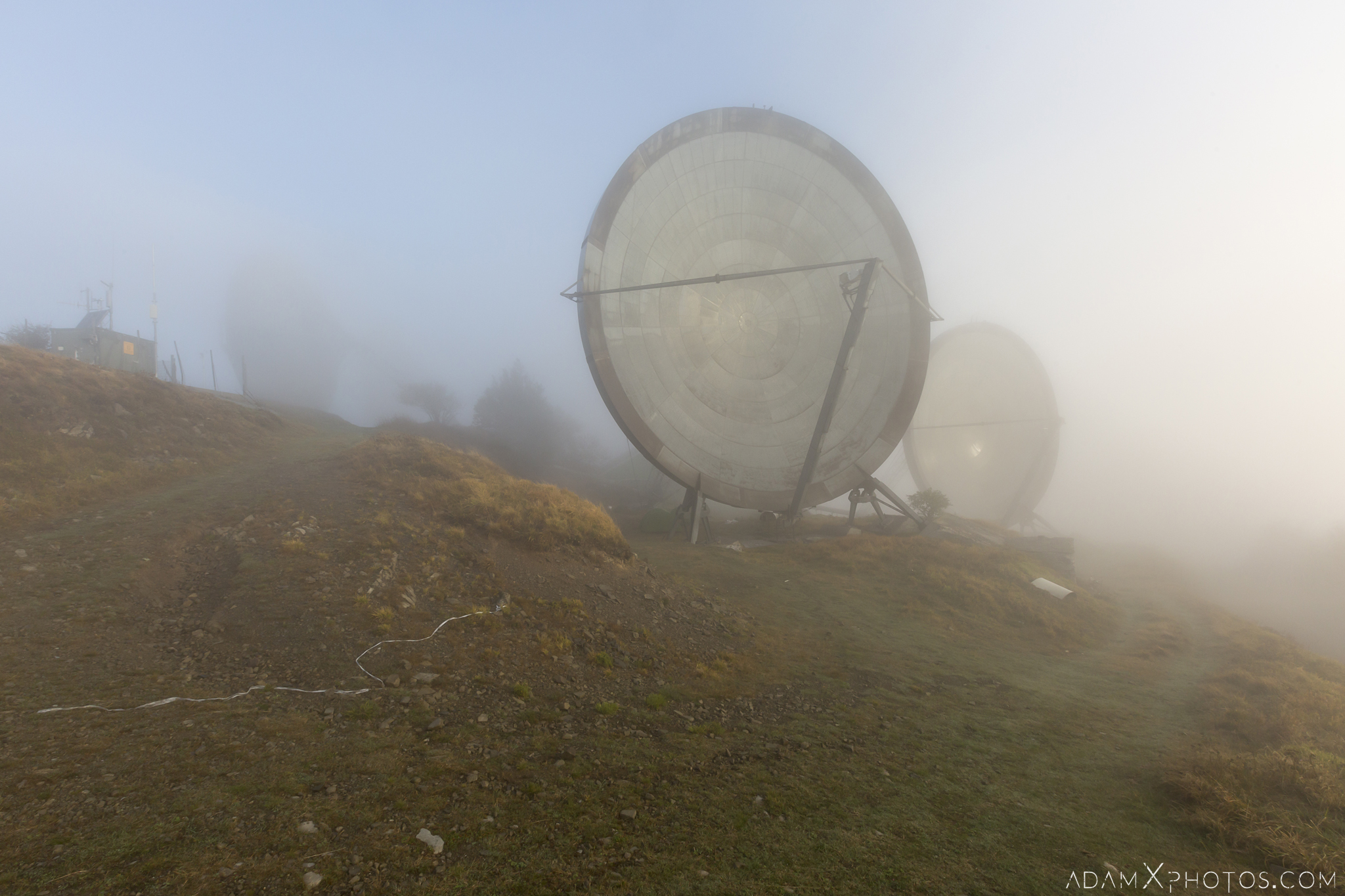 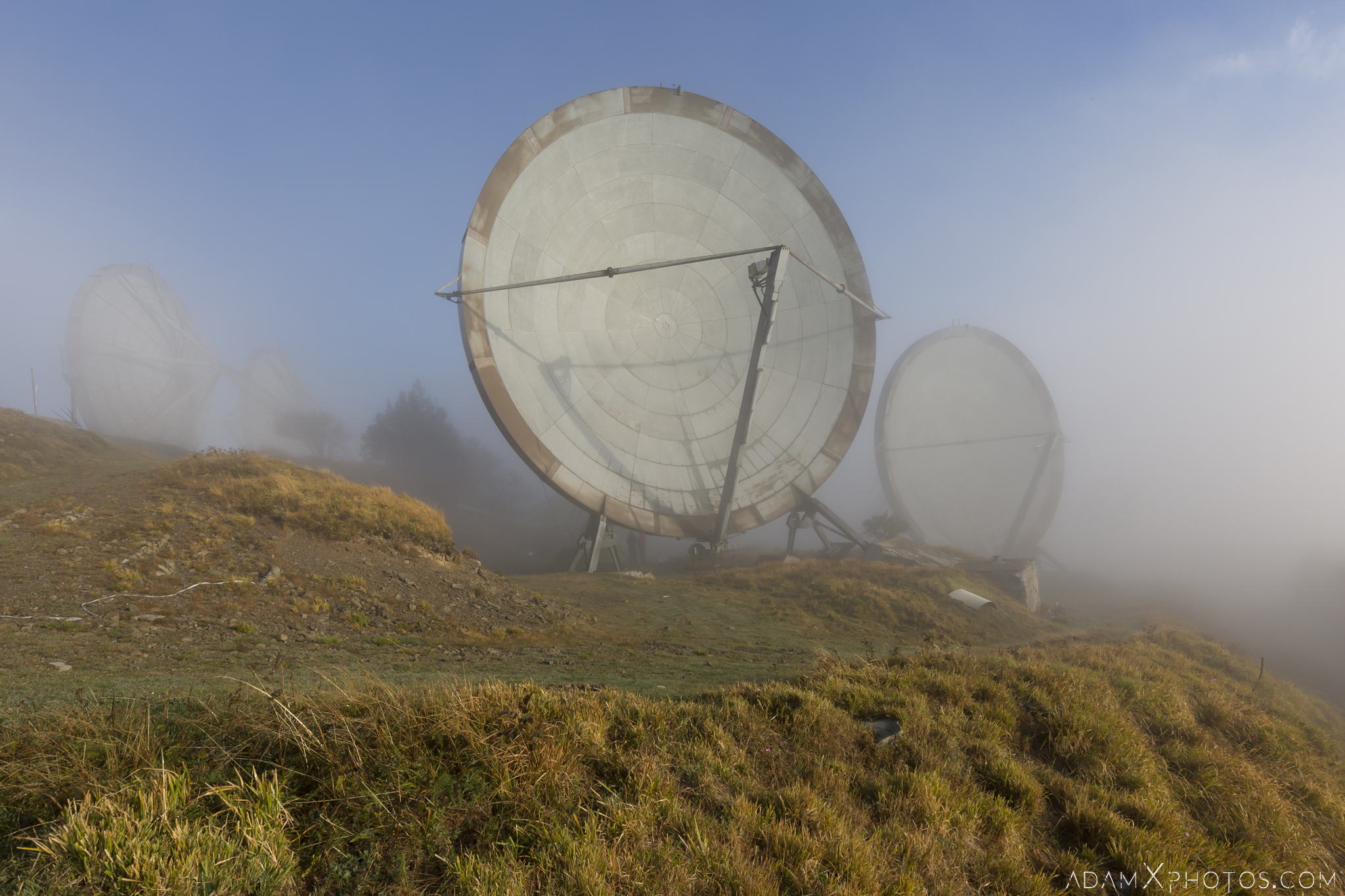 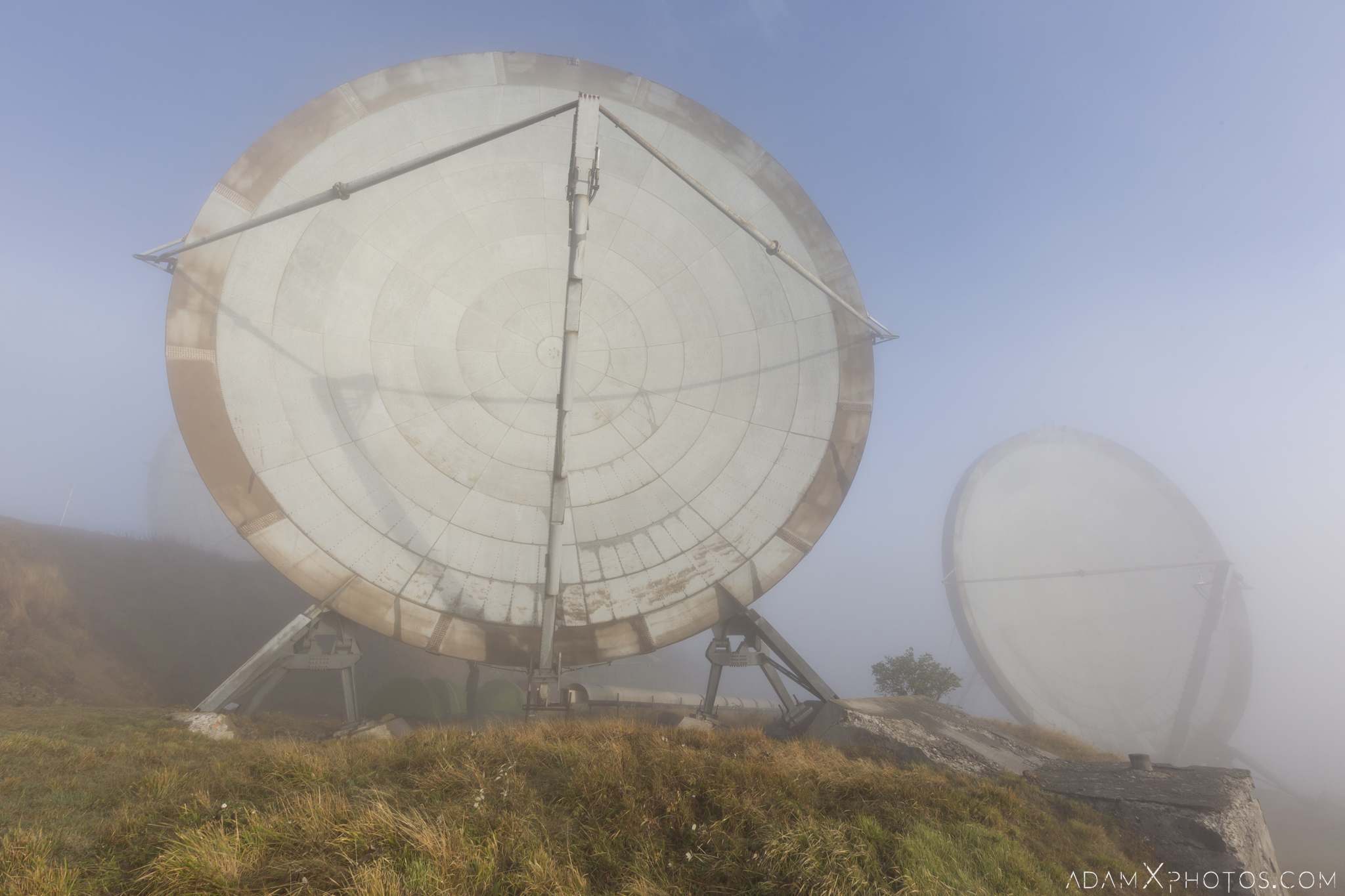 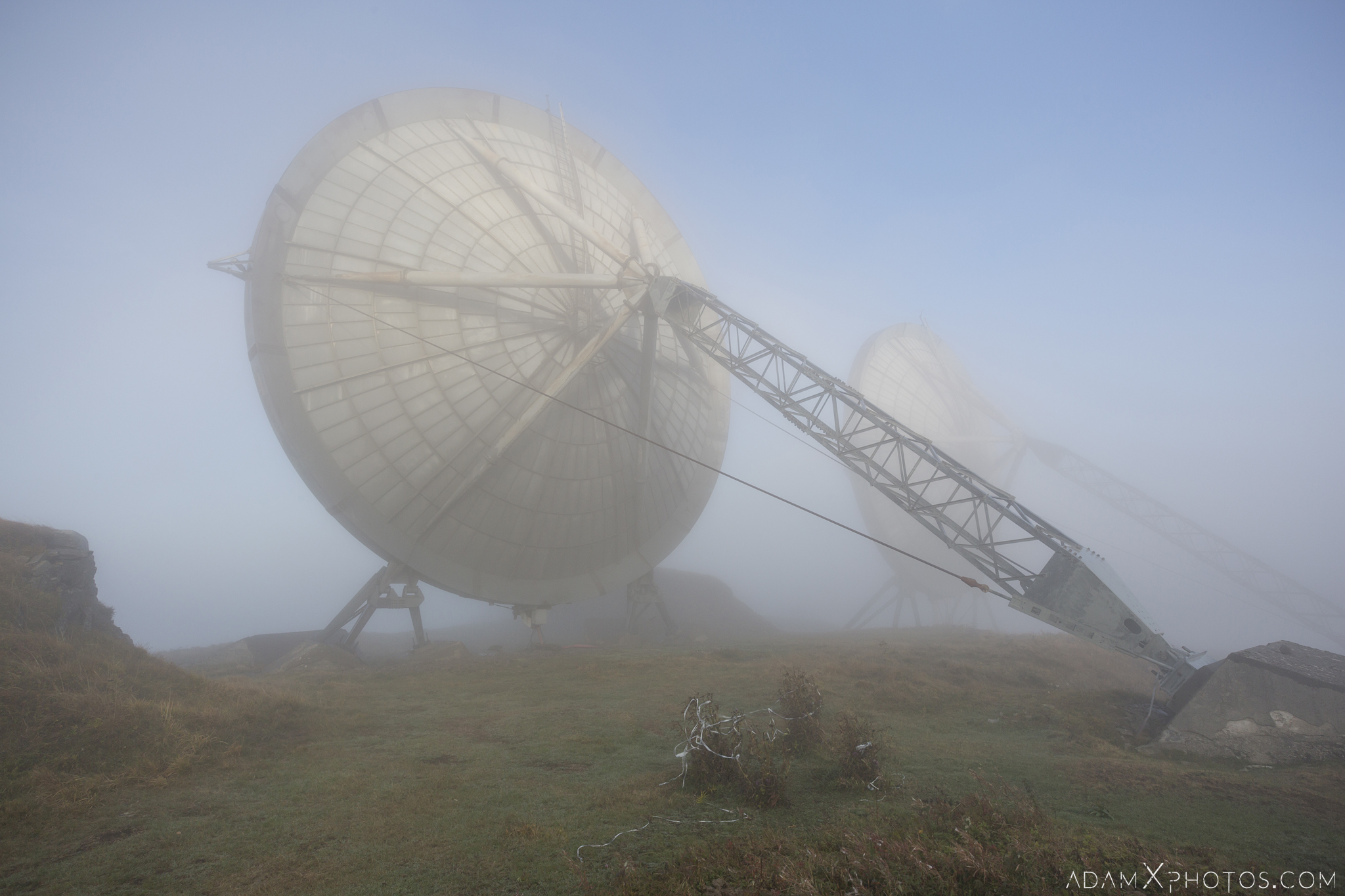 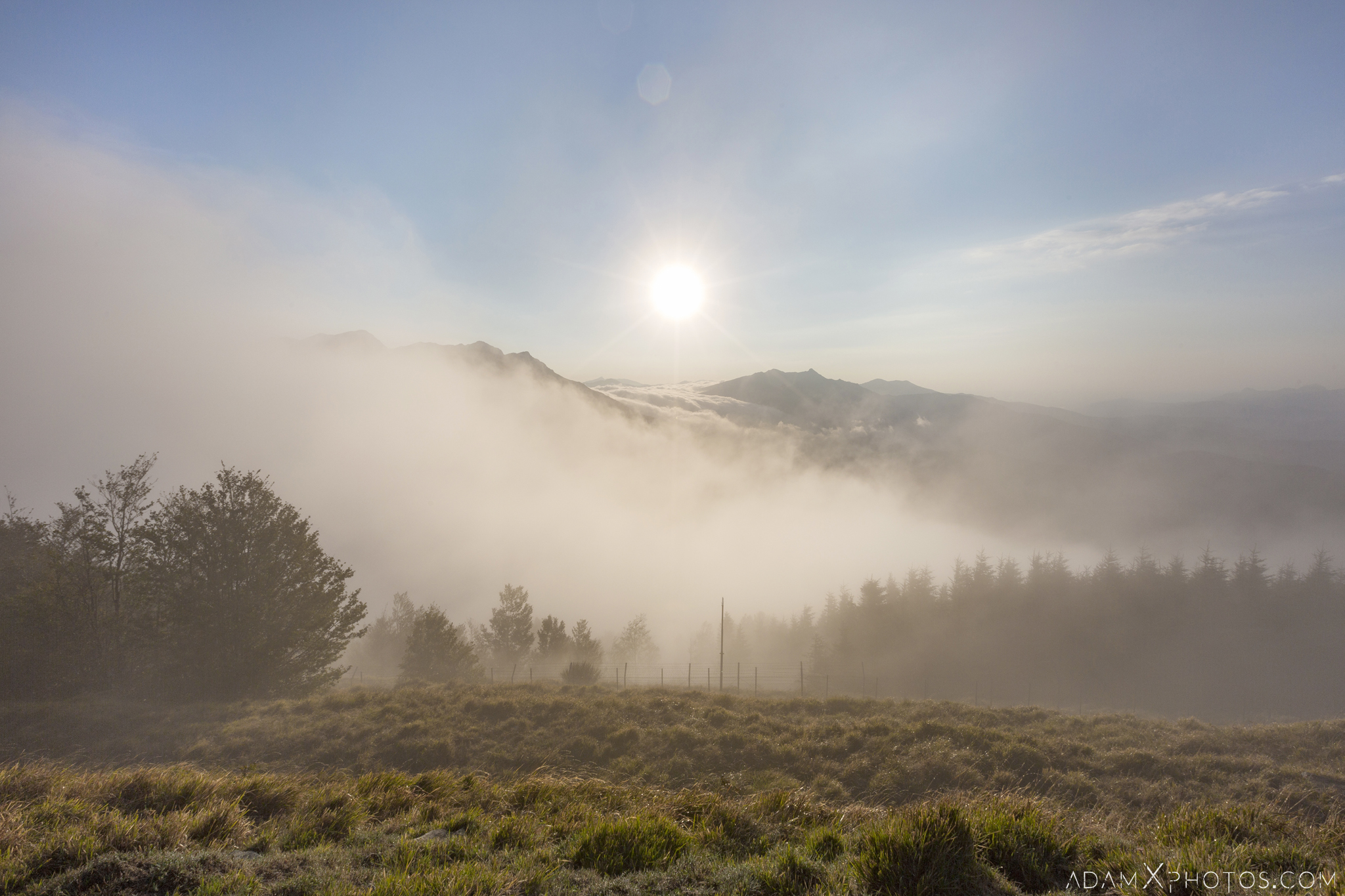 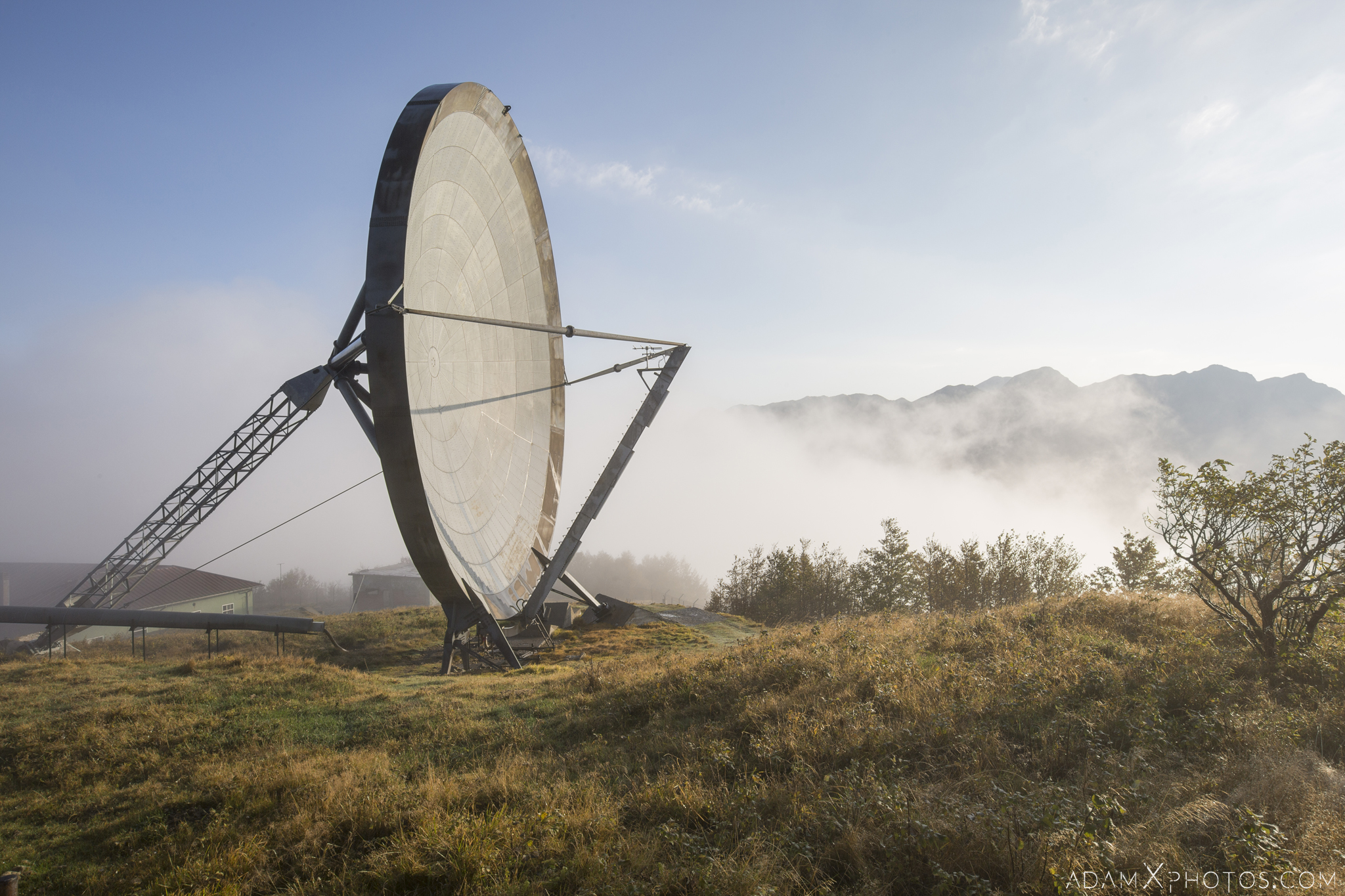 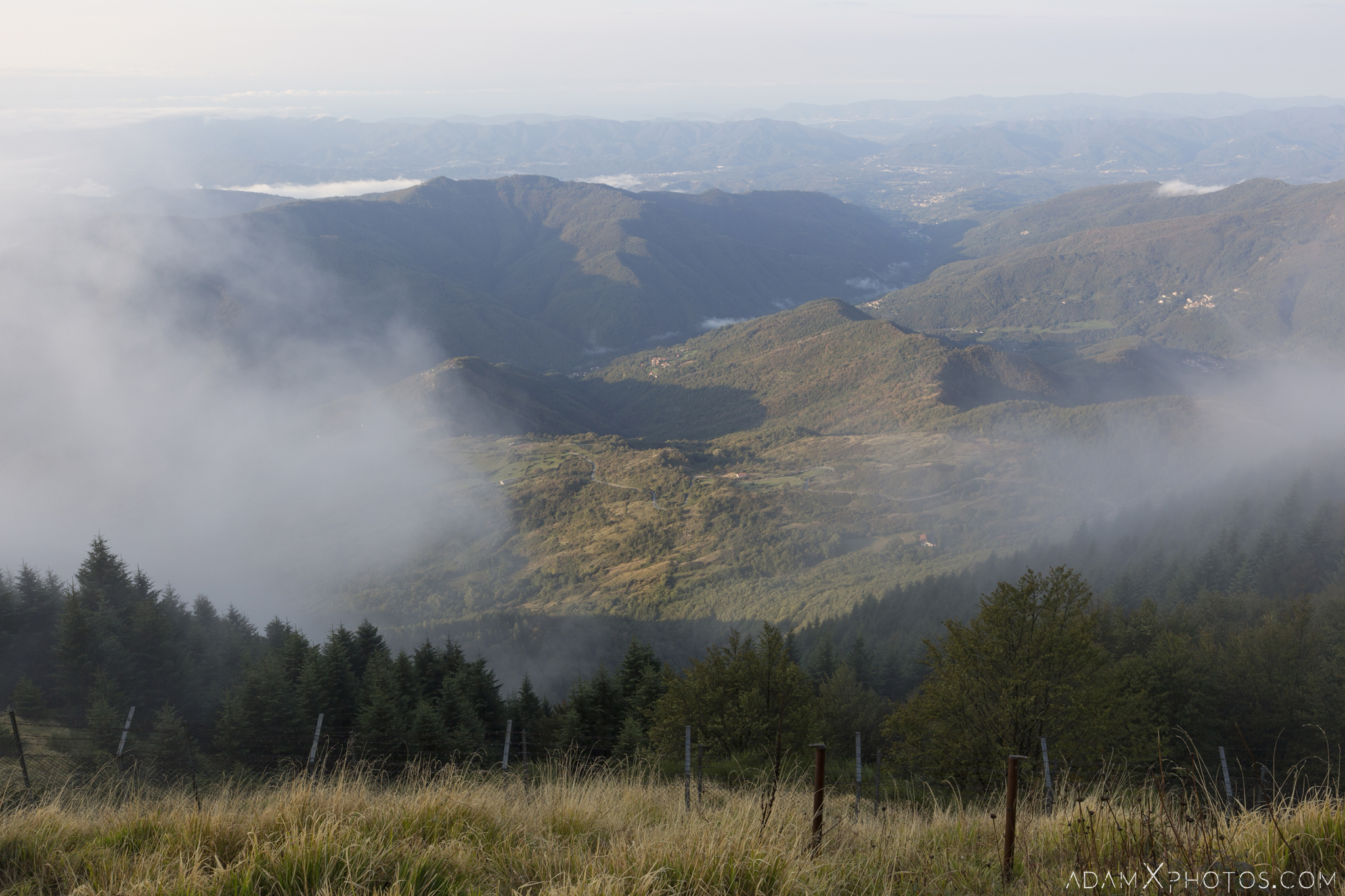 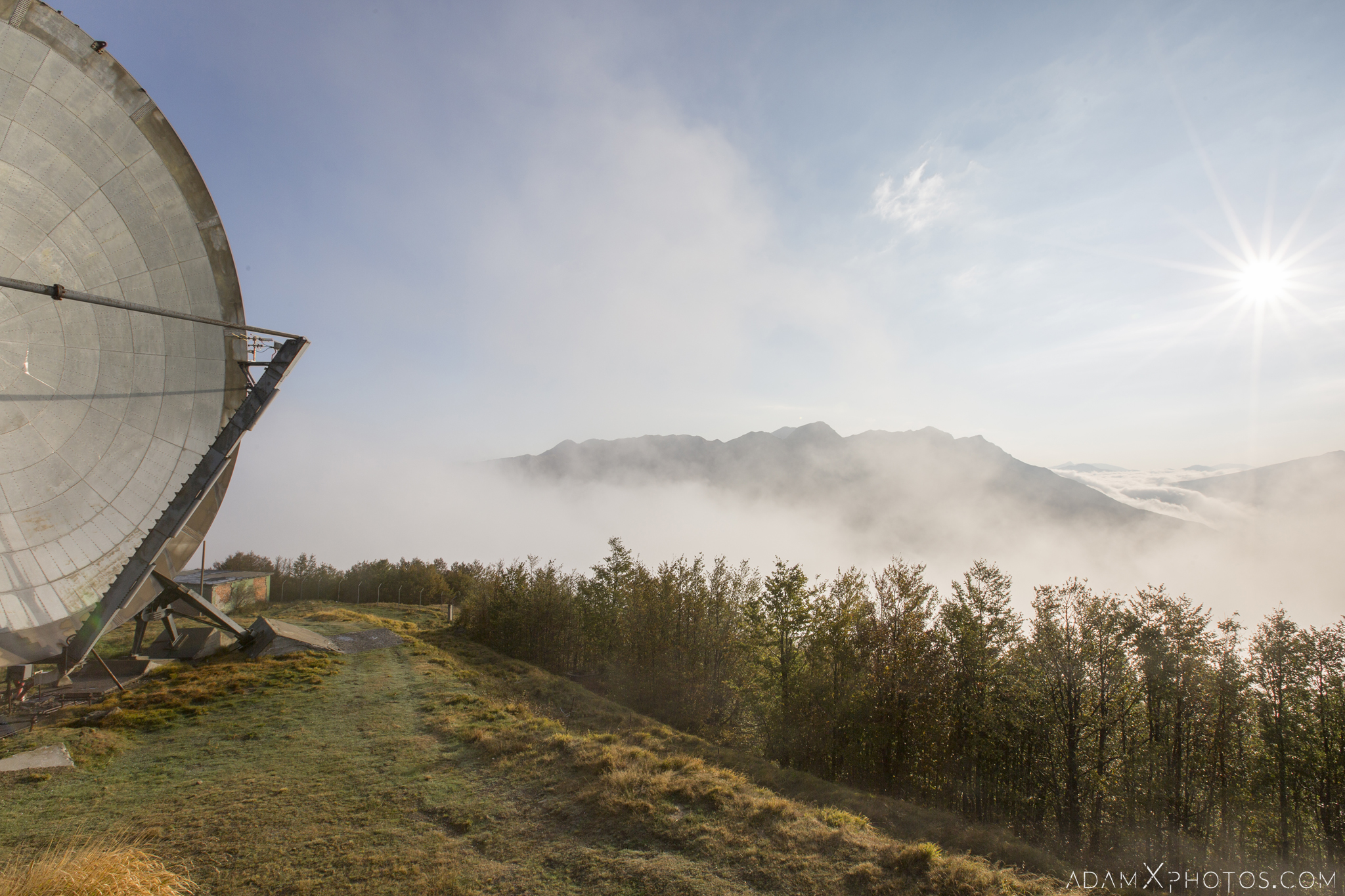 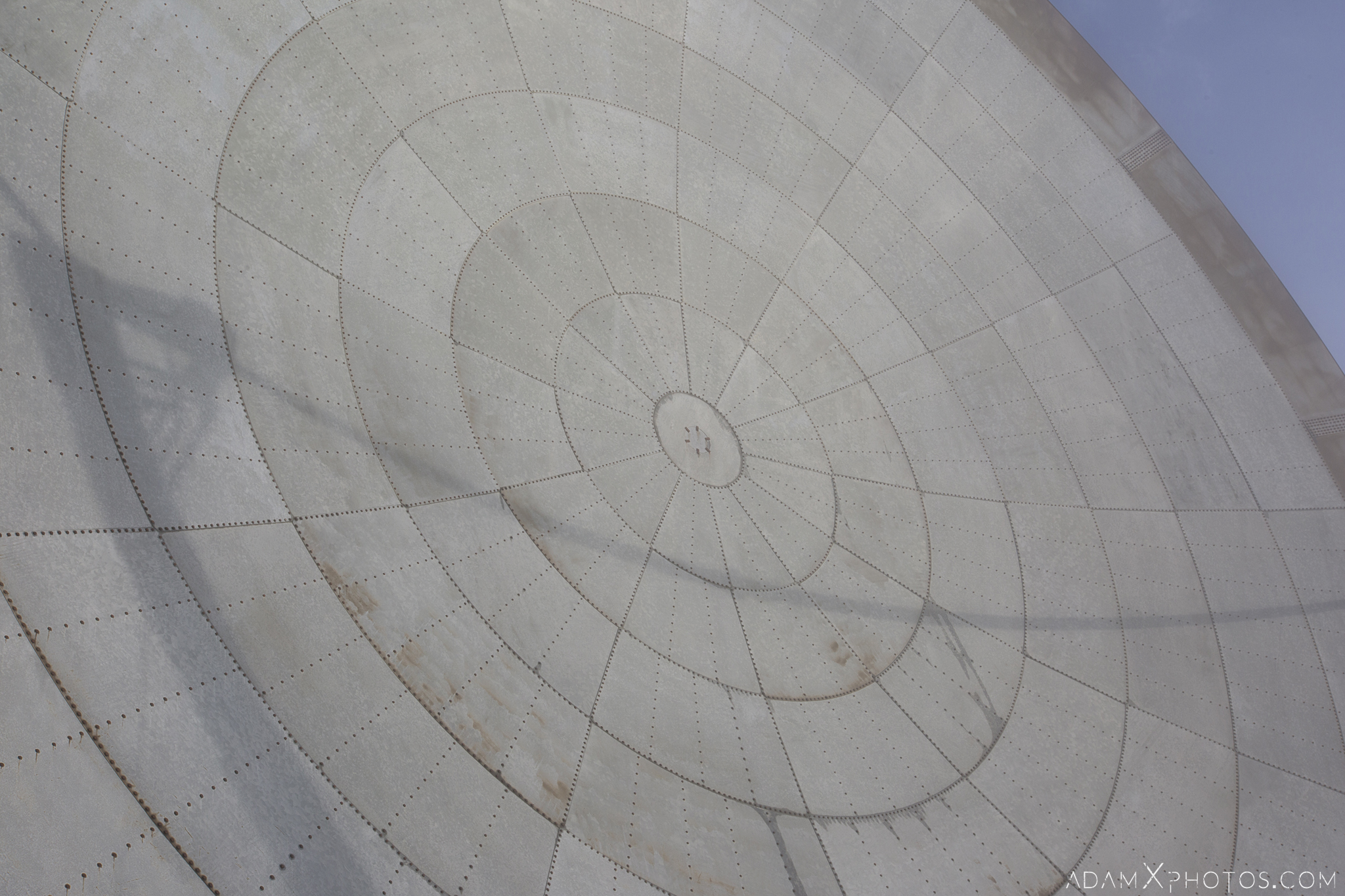 We packed everything away, and made sure we had removed every last scrap of rubbish. We jumped in the car, and… nothing! Dead battery! It seems the freezing temperatures hadn’t been to our car’s liking either. The good news for a push start was that we were at the top of a very large slope. The bad news was that the slope consisted of lots of hairpin bends with precipitous drops down the mountainside! James was nominated as pilot. The first attempt didn’t work. We slowly manoeuvred the car around one hairpin to the next straight bit of road, and tried again. The car and James rolled down the road and into a thick bank of low-lying cloud and out of sight. Then we heard what sounded like a roar of an engine and a very loud “arrrrrgghhhhh” shout coming out of the mist! We ran towards it, not knowing whether James had lost control and crashed off the side of the road, or whether that was a shout of victory. Thankfully it was the latter, and we were back in business! We hopped in, and slowly made our way down the mountain, stopping briefly to further admire the view… Eventually we made our way back to the bottom of the track and onto the main road, where we stopped to take a few shots of the dishes in the distance… 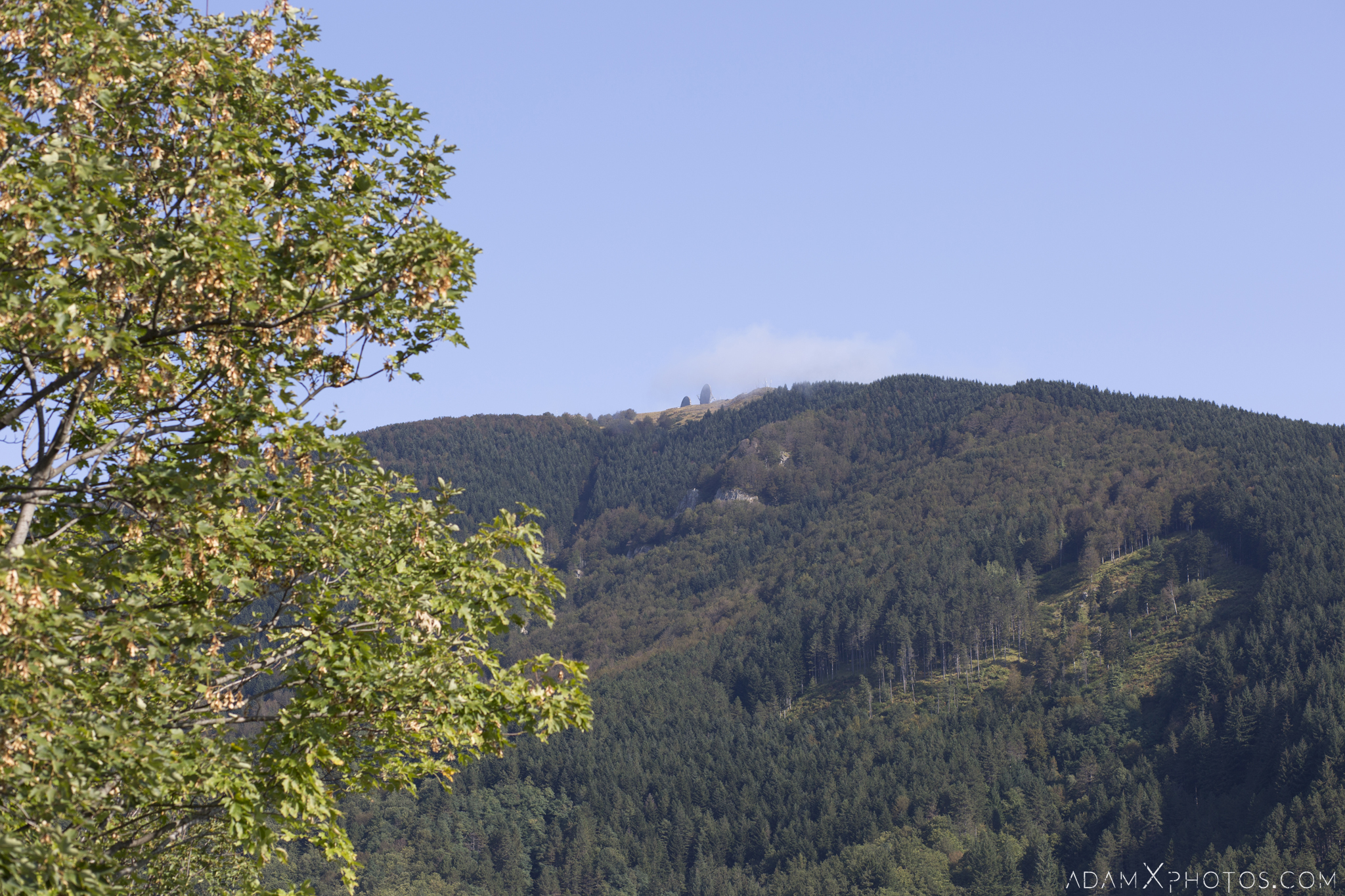 I will never forget our visit to Ice Station Zebra – it’s not every explore which features logging trails, road repairs, camping in the clouds, campfires, drinks and laughs, borderline hypothermia, dead cars, and views like that! Next time I think I’ll come back with a 4 wheel drive in the summer… 🙂

Ice to see you.
Adam X