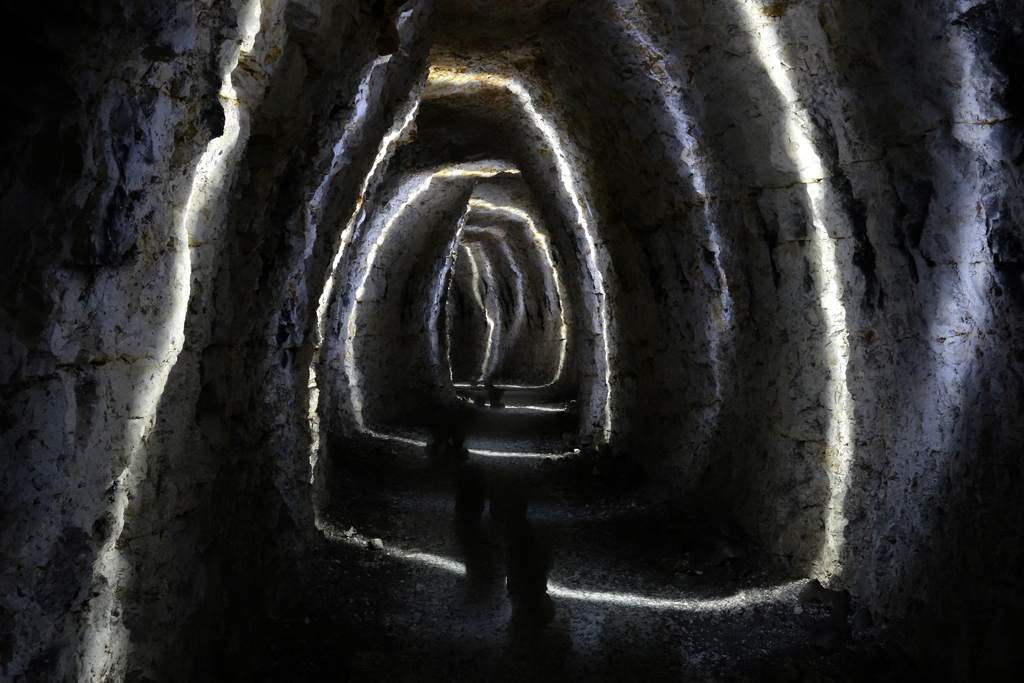 After clambering up the gantry on my revisit to the timber yard, for our next explore of the day Kubix_UK and I decided to head underground to Harford Hills Chalk Mine. Here is a short background to the mines, taken from this excellent site, which includes a fairly comprehensive survey of the mine and a map of the mine’s layout:

Norwich was mined for chalk and flints from the Middle Ages until the beginning of WWII but some of the chalk mines are much older, the earliest are believed to date from the 12th century. The oldest mines are located closest to the centre of Norwich and more mines were dug further out as the city grew. The chalk was used for liming in agriculture and in building mortar. The flints that can be seen embedded in layers in the chalk were used to build the city’s walls and some of Norwich’s finest buildings such as the Guildhall. The last chalk mine to close was at Harford Hills, to the south of Norwich. There are no detailed maps of all the mines located within the city boundary but it is known that the great majority were privately owned and dug between the 12th and 18th centuries, at times when record keeping was not thought necessary. The only existing records date from later times when the Council documented the locations where collapses have occurred that were deemed to be due to mine workings. (Much of this information was taken from the County Council’s website.)

The site of this chalk quarry is now a woodland and has, over the years, been transformed into one of eight local nature reserves in Norwich – Danby Wood Nature Reserve. Situated on the southern fringe of the city, the banks, hills and hollows created by the quarrying activities are traversed by numerous tracks and paths that are enjoyed by many walkers.

This was my first underground explore, so my photography was a bit of trial and error. I’m definitely planning a revisit at some point to practice further – one major error I made was shooting in JPEG only, rather than the more forgiving RAW format – next time! We then headed in… Previous explorers have helpfully left some markers spray painted at junctions, to indicate dead-ends, and the route back to the mine’s entrance. Some of the tunnels got rather narrow in places, as can be seen in this shot… We also had some fun playing around with creating some light effects with our torches…these shots aren’t perfect by any means, but they serve their purpose for a first attempt. …and I’l leave you with a final bit of light painting jiggery pokery…done in the pitch black and written as a mirror image when facing the camera – it took several attempts before I achieved this shot.