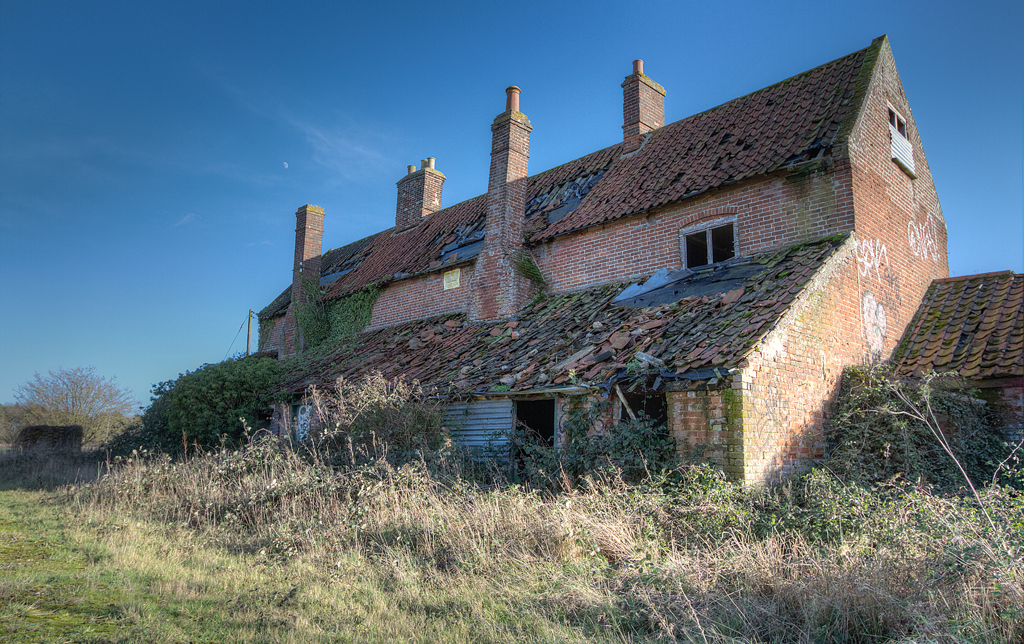 Stop number 4 on a whirlwind day of solo exploring – thanks to Desolate Nation for the heads up on this one.

So what I can I say about Planet Farm? Well, “Planet Derp” would probably be closer to the mark. Apparently the place has been abandoned for decades, and the local kids have clearly long since had their fun in trashing it and covering it in graffiti.

That said, umm…. the walk down the overgrown track from the main road was a pleasant enough stroll… and….umm… the barn has a nice thatched roof. That’s about it folks.

A very brief background (copied from here, although they seem to have got most of the info from the British Listed Buildings entry):

Planet Farm consists of a cluster of farm buildings of which the seventeenth-century straw-thatched barn to the west is listed. This five-stead barn, approximately 22 x 5.5m, is aligned north-south and faces west. It is one of two buildings in Hethersett which remains thatched.

Inside, the three-tier roof has upward turned windbraces to the second tier and there are ties and collars. A number of internal walls and partitions are in English bond.

It appears on a map from 1882 as “Plainwood Farm”, but has been known as “Planet Farm” since at least 1907. It’s not a massive leap to suspect that it’s current name might be a corruption of its former, especially when you try saying “Plainwood” in the thickest Norfolk accent you can muster?

It’s currently owned by a developer, although it doesn’t look as if development is likely any time soon… …and the dilapidated farmhouse. The notice telling parents to warn their children of the dangers of trespassing on this site clearly worked a treat. Not. Probably because the parents weren’t standing outside whilst little Johnny and Timmy were playing with their paint cans inside… The view from the farmhouse attic, looking West towards the Grade II listed thatched barn. Another external view, with the listed thatched barn to the right. The thatched roof was a diamond in the rough.