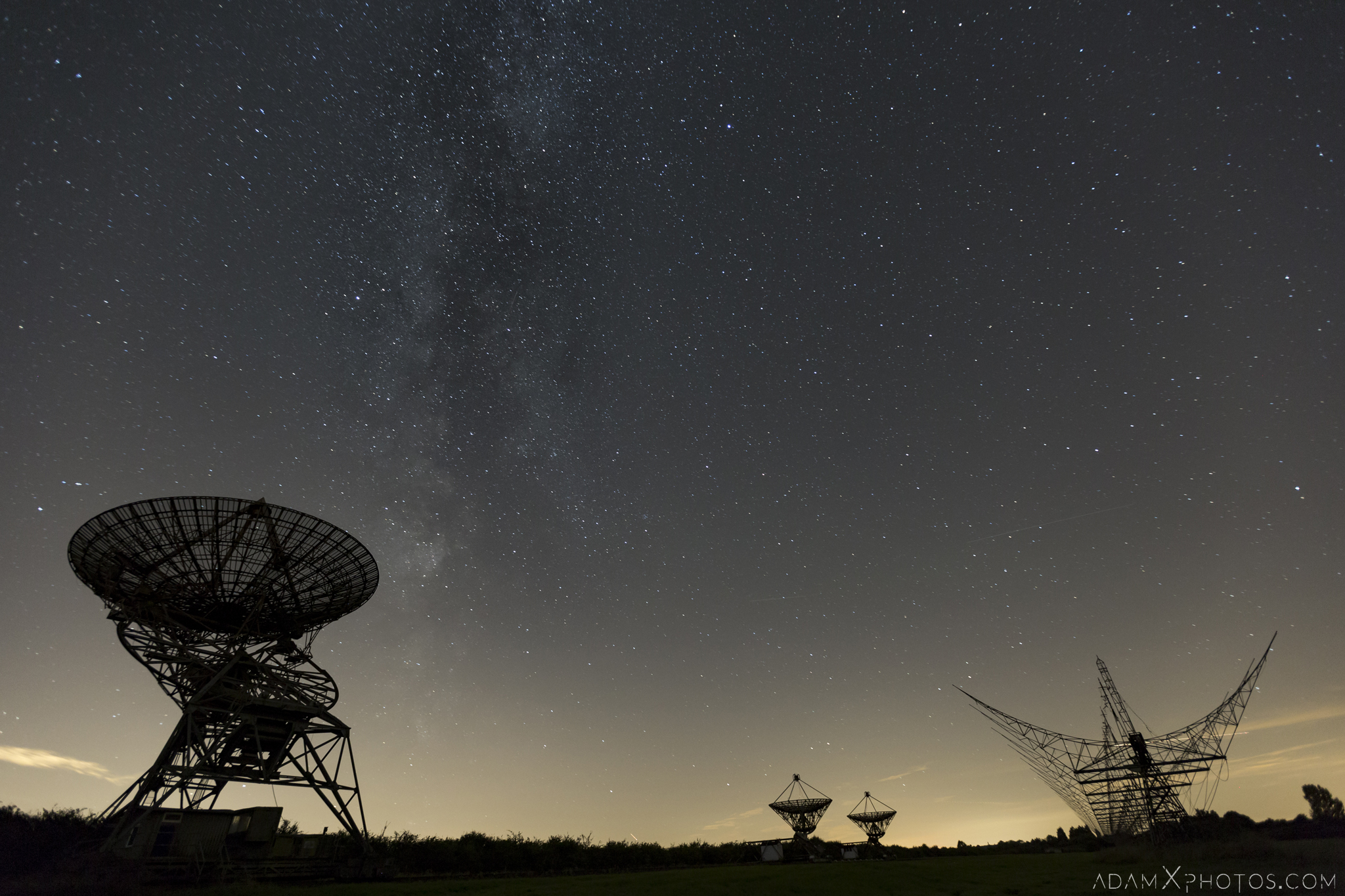 History
The Mullard Radio Astronomy Observatory(MRAO) is home to a number of large aperture synthesis radio telescopes, including the One-Mile Telescope, 5-km Ryle Telescope, and the Arcminute Micro kelvin Imager. Radio interferometry started in the mid-1940s on the outskirts of Cambridge, and with funding from the Science Research Council and a donation of £100,000 from Mullard Limited, construction of the Mullard Radio Astronomy Observatory was completed and opened by Sir Edward Victor Appleton on 25 July 1957.

The site is located at Lord’s Bridge, Cambridgeshire on a former ordnance storage facility, next to the now-abandoned Cambridge-Bedford railway line. A portion of the track bed of the old line, running nearly East-West for several miles, was used to form the main part of the “5km” radio-telescope and the Cambridge Low Frequency Synthesis Telescope.

The Observatory is operated by the Cavendish Laboratory, supported by the Science and Technology Facilities Council.

My Explore
I’d been meaning to photograph these largely disused antennae for absolutely ages. Finally a night came when I was didn’t have to be up early the next morning, and the weather was suitable for night photography, i.e not too cloudy or windy. As it was a spur of the moment decision I did this as a solo explore, which was great as it meant I could spend as much time as I wanted taking my shots, including a 30-minute sequence used to create the ‘star trail’ image. The only downside was I don’t mind to admit it was a little creepy at times in the dark, especially with foxes and owls occasionally wailing and screeching in the nearby undergrowth!

All in all this was a very enjoyable night out, and I plan on returning for some more shots of the other parts of the site in the near future. 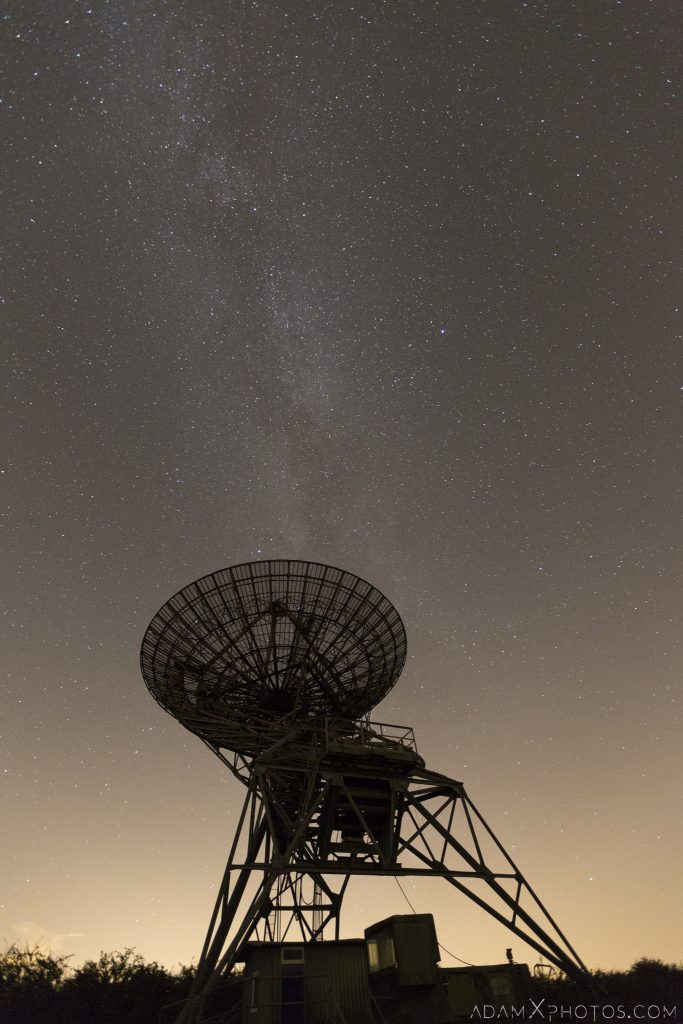 One antenna of the One-Mile Telescope.

Built in 1964 the telescope comprises three 60-foot parabolic reflectors, which are fully steerable. Each dish weighs 120 tonnes, two are fixed and one is set on an 800m track with the Half Mile Telescope. This track is straight to within 0.9cm and is raised 5cm at the far end to allow for the curvature of the Earth. This set up was able to observe individual radio sources at extreme sensitivity, angular resolution and image quality. 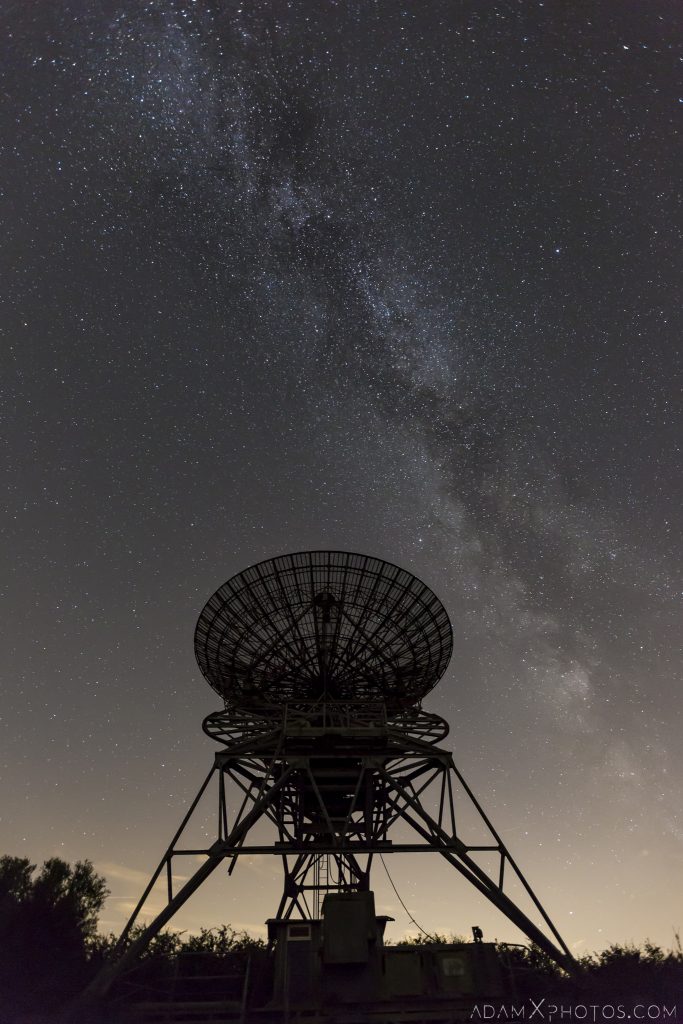 The Half Mile Telescope was originally constructed in 1968, with two dishes. In 1972 a further two dishes were added. Two are fixed and two share the track with the One Mile Telescope. Thirty days of observations were required to obtain information from the maximum number of different baselines. They produced the first good radio maps of hydrogen distribution for the Triangulum Galaxy (M33) and the Andromeda Galaxy (M31).

The 4C Array which looks like a huge aerial is a cylindrical paraboloid radio telescope. Constructed in 1958, it is 450m long and 20m wide and used some 64 kilometres of reflector cable. A second moveable element of this array has now been mostly removed. 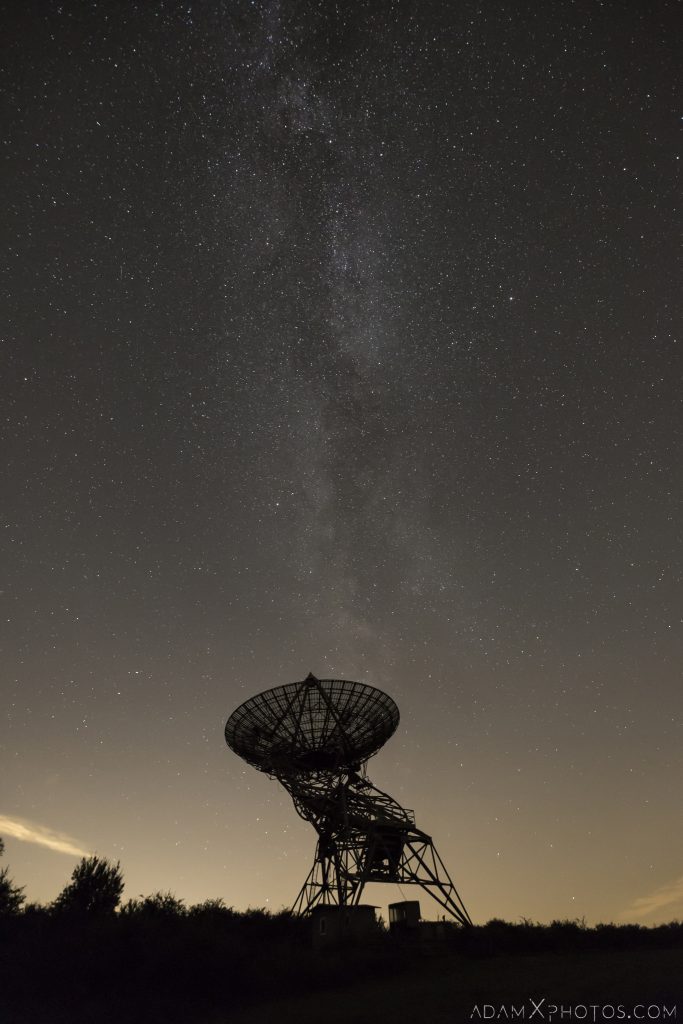 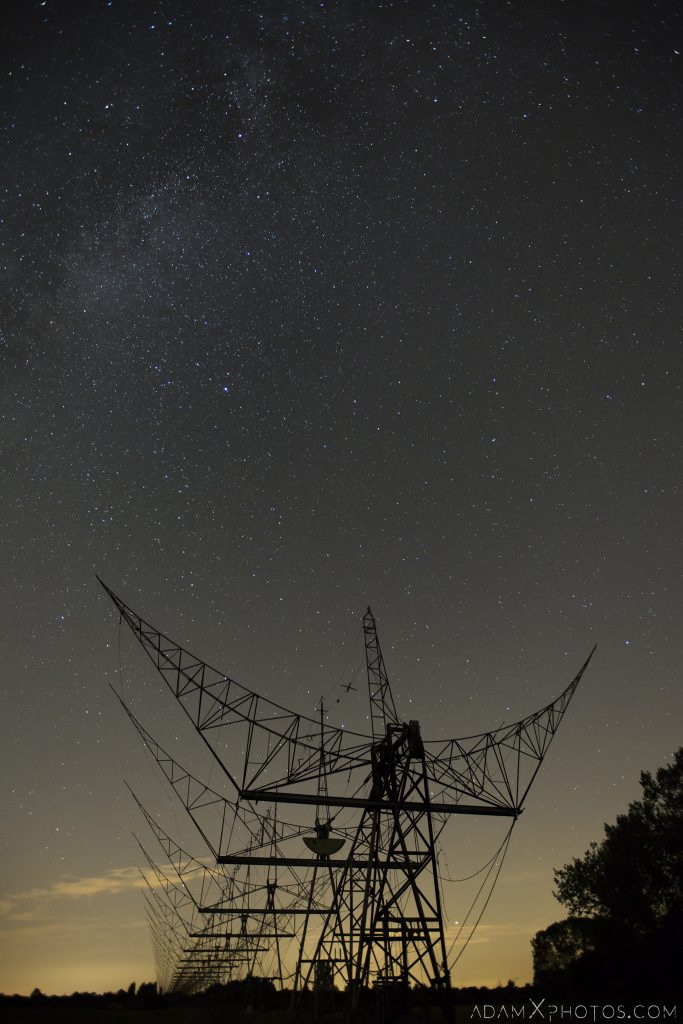 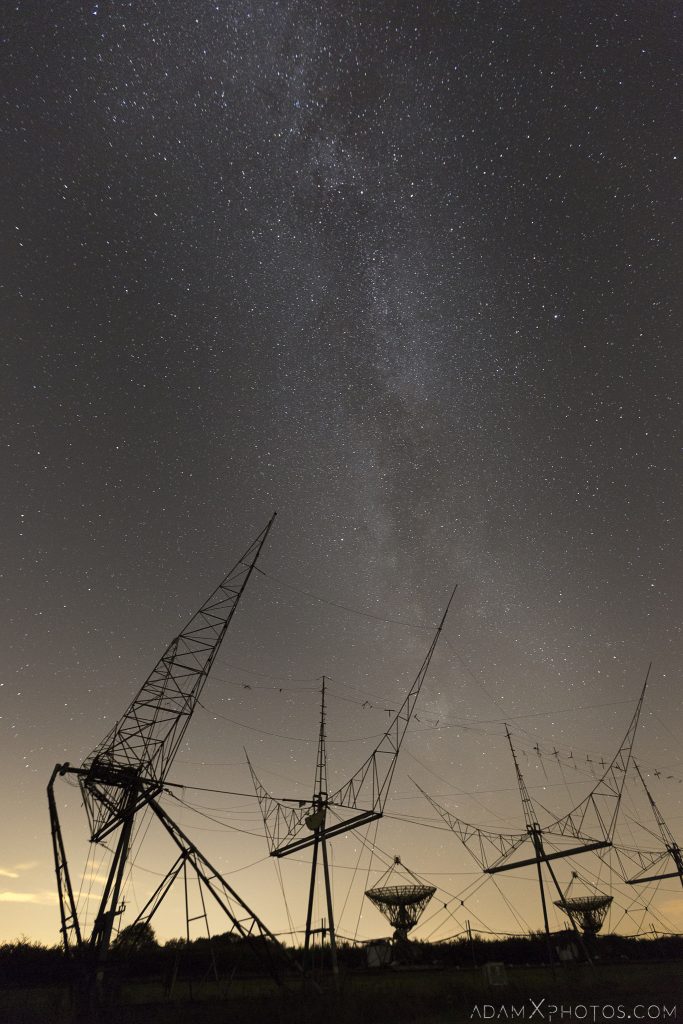 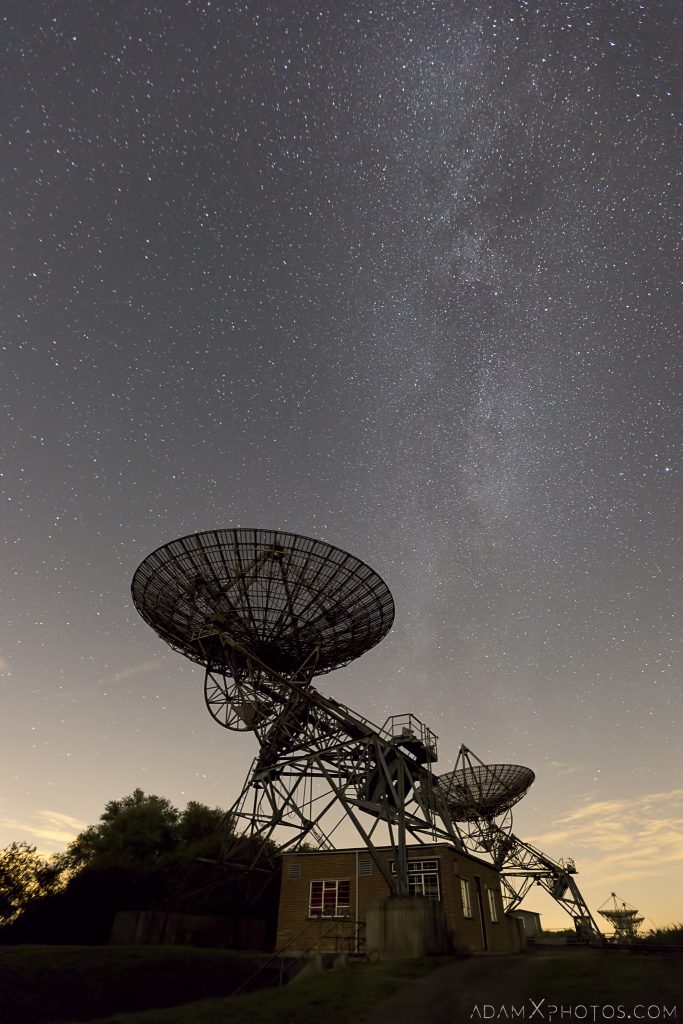 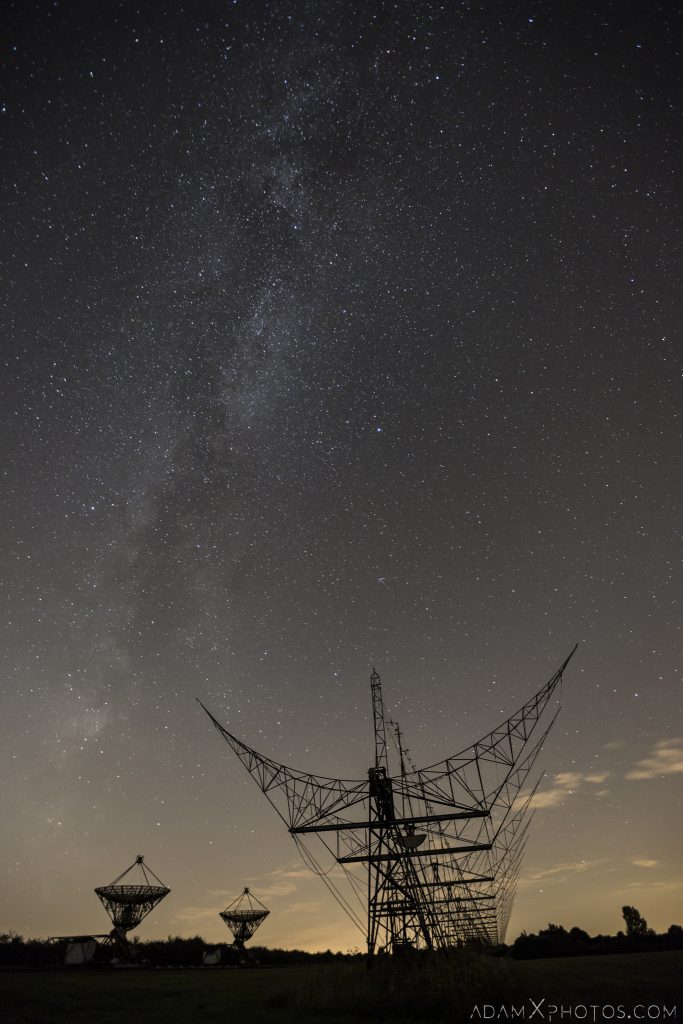 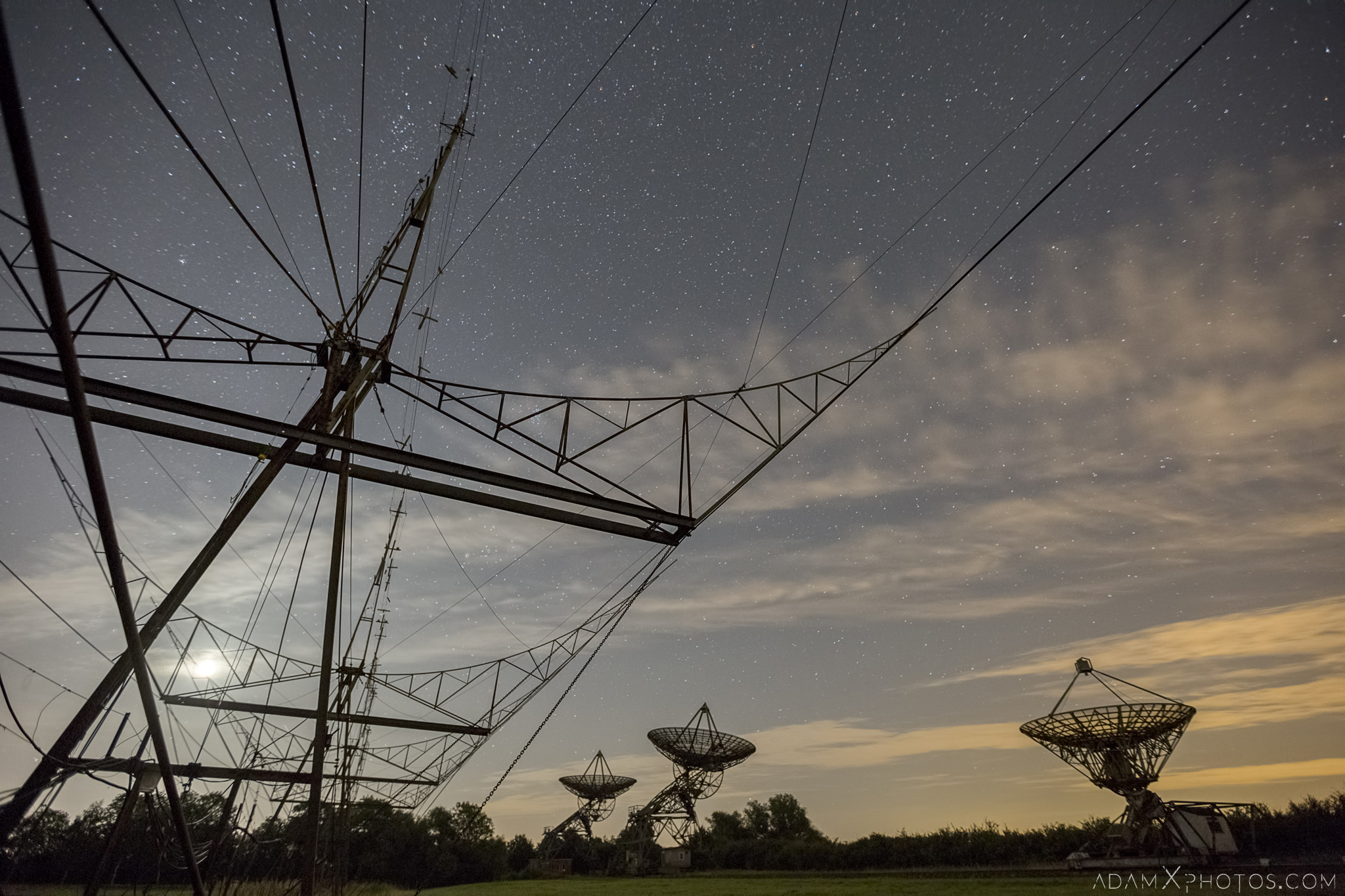 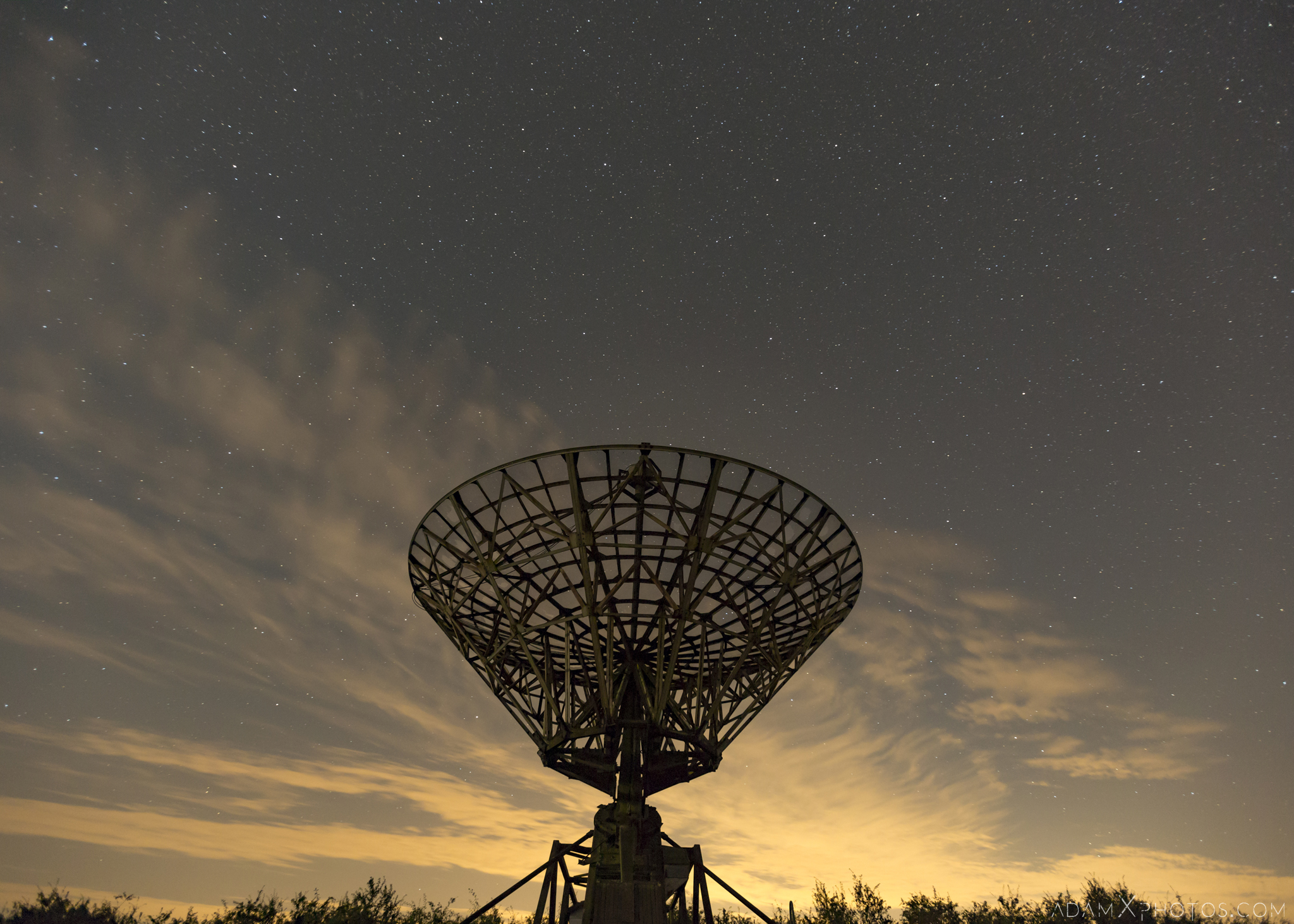 One antenna of the Half-Mile Telescope. 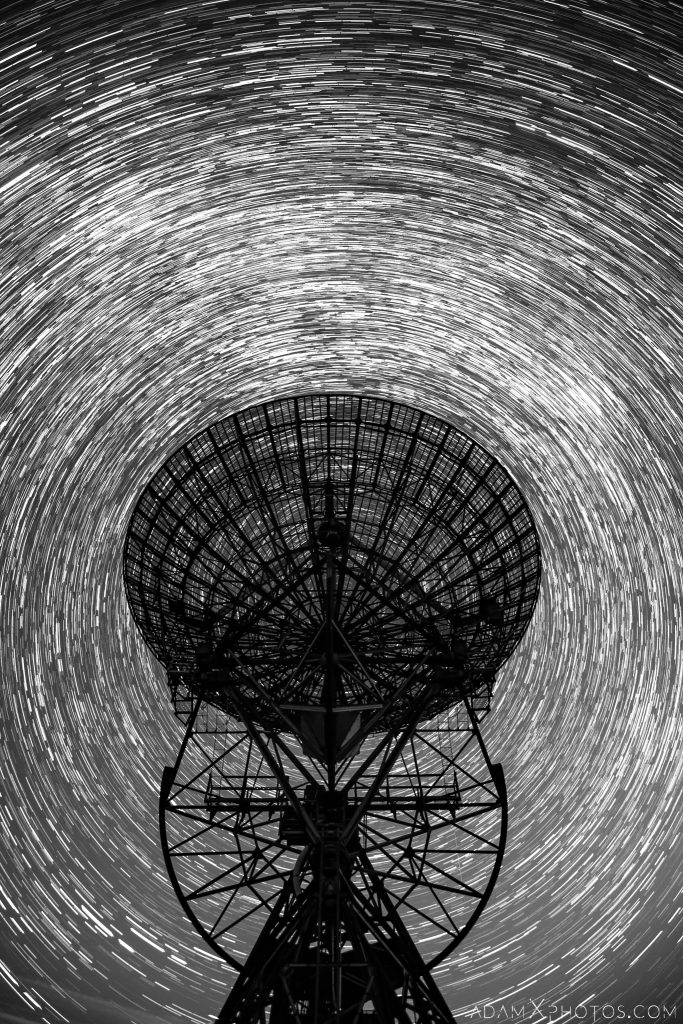 And I’ll leave you with this star trails composite, taken over the course of just over half an hour.

Thanks for being stars.
Adam X