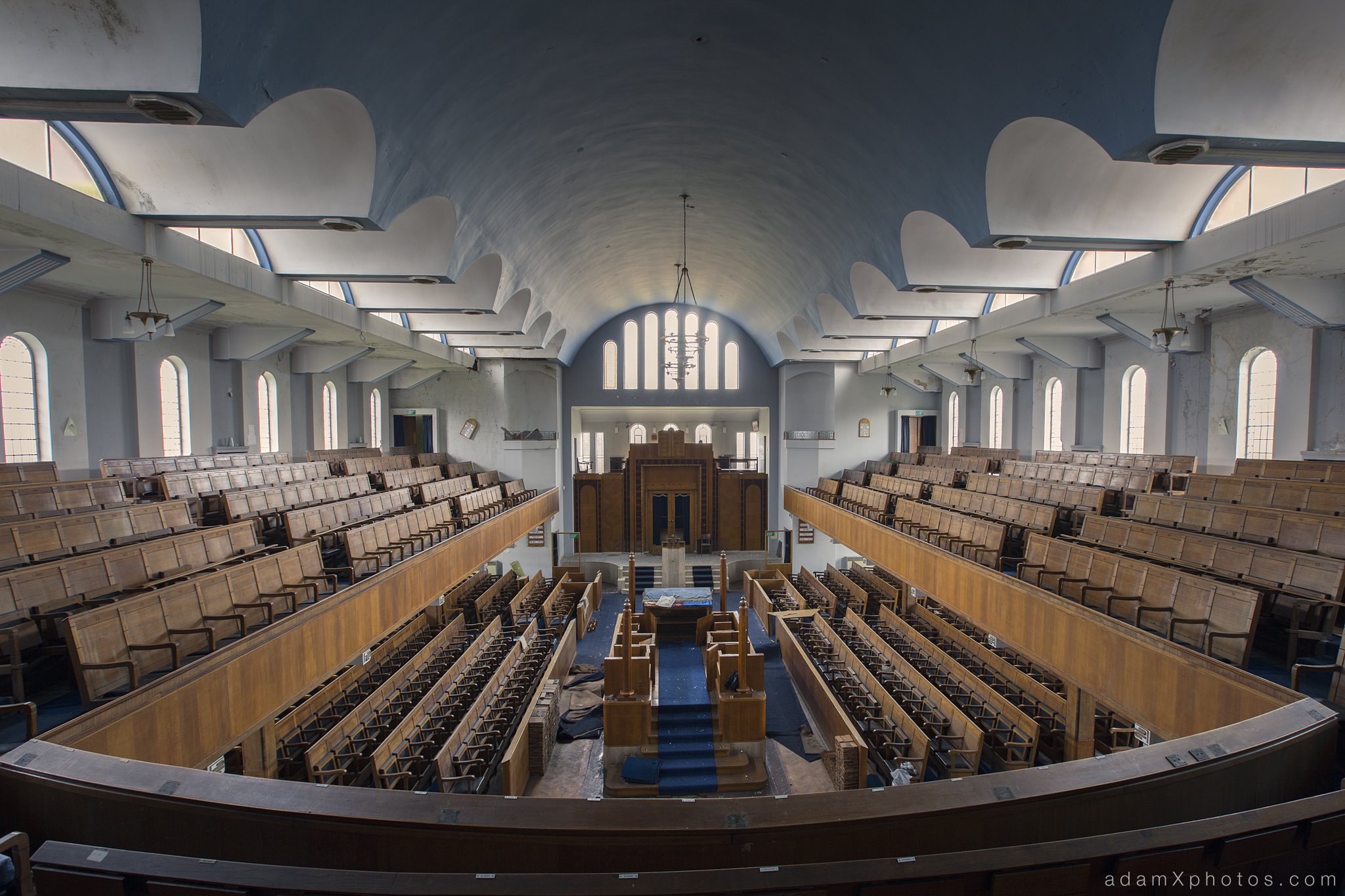 Explore #3 of the Quality>Quantity aka Crimes Against Photography Tour

After our successful explores at Tower X and The Royalty Cinema our intrepid gang then hit the exploring doldrums for a few hours, as we failed to gain access to the next site, and found the one after that to still be very active and had to be aborted for another day. But we pressed on through the fatigue, and by mid-afternoon we had made our way to Liverpool and our spirits were all raised with a successful explore of this wonderful abandoned Synagogue.

History
After World War I and by the mid 1920s the Jewish population of Liverpool began to move out of the city centre to the wealthier suburbs, and in particular Sefton Park. In 1935 the lease for the site of The Ark was obtained from the City Corporation. The synagogue was designed by Alfred Ernest Shennan in the prevalent Art Deco and with Swedish architectural influences.

The foundation stone for the synagogue was laid on 14 June 1936 by Baron Tobias Globe, attended by the Chief Rabbi of the British Empire, Dr J H Hertz. The building was consecrated on August 15 1937 and opened by Professor Henry Cohen (a member of the congregation and later Lord Cohen of Birkenhead).

The basement area of the building was originally used as a youth centre and the synagogue had its own scout troop (the 22nd Wavertree). During the blitz in 1941 the synagogue was used as a reception centre for bombed out families in Liverpool and held a non-Jewish service at Christmas. It was also used as a social centre during the war by American Jewish GIs stationed at a nearby air base. After the war they presented a plaque to the congregation, which is displayed in the entrance hall.

In May 1959 a burglar started a fire that destroyed the Ark and Torah scrolls and part of the roof structure. The building was subsequently restored by the original firm of architects at a cost of £50,000 and re-consecrated in 1961. Due to increasing competition the youth centre closed at this time. A further fire occurred in two first floor offices behind the ladies’ gallery in 1965 but damage was confined to the former areas.

The synagogue was listed Grade II* by English Heritage in May 1983, being described as “one of the finest Art Deco synagogues in the country”, with “important socio-historic significance as an inter-war synagogue of 1936-7 that represents one of the last free cultural expressions of European Jewry before the Holocaust”.

The building ceased active use on 5 January 2008, and has been on English Heritage’s At Risk Register since 2010. Its future remains uncertain, despite a £70,000 grant from English Heritage and Liverpool City Council in 2013 to carry out urgent repairs on the structural integrity of the building, and to make it weather-proof.

Our Explore
Despite being a keen traveller this was my first visit to what an old friend once dubbed the “crime ridden” City of Liverpool – to be fair he was just trying to wind up our scouse mate, but the prefix has stuck in my mind ever since. Unfortunately I was on too much of an exploring mission to have time to visit the traditional attractions that Liverpool has to offer, but hope to return some time soon to see the sights which don’t involve peeling paint and broken windows.

As you will see from my photos, The Ark is unfortunately starting to suffer from the damage which sadly seems to be an inevitable fate for such a large and interesting empty premises in a urban location readily accessible by local kids and vandals. There was still plenty remaining of interest, and I just hope that the recent repair works keep this beautifully building going until it finds a new future, and that it doesn’t get any more trashed in the meantime.

On with the photos – as always click on a photo to VIEW LARGE. The front of The Ark. Over 6 million jews lost their lives during the Holocaust between 1941-1945. …before we said our farewells to The Ark.