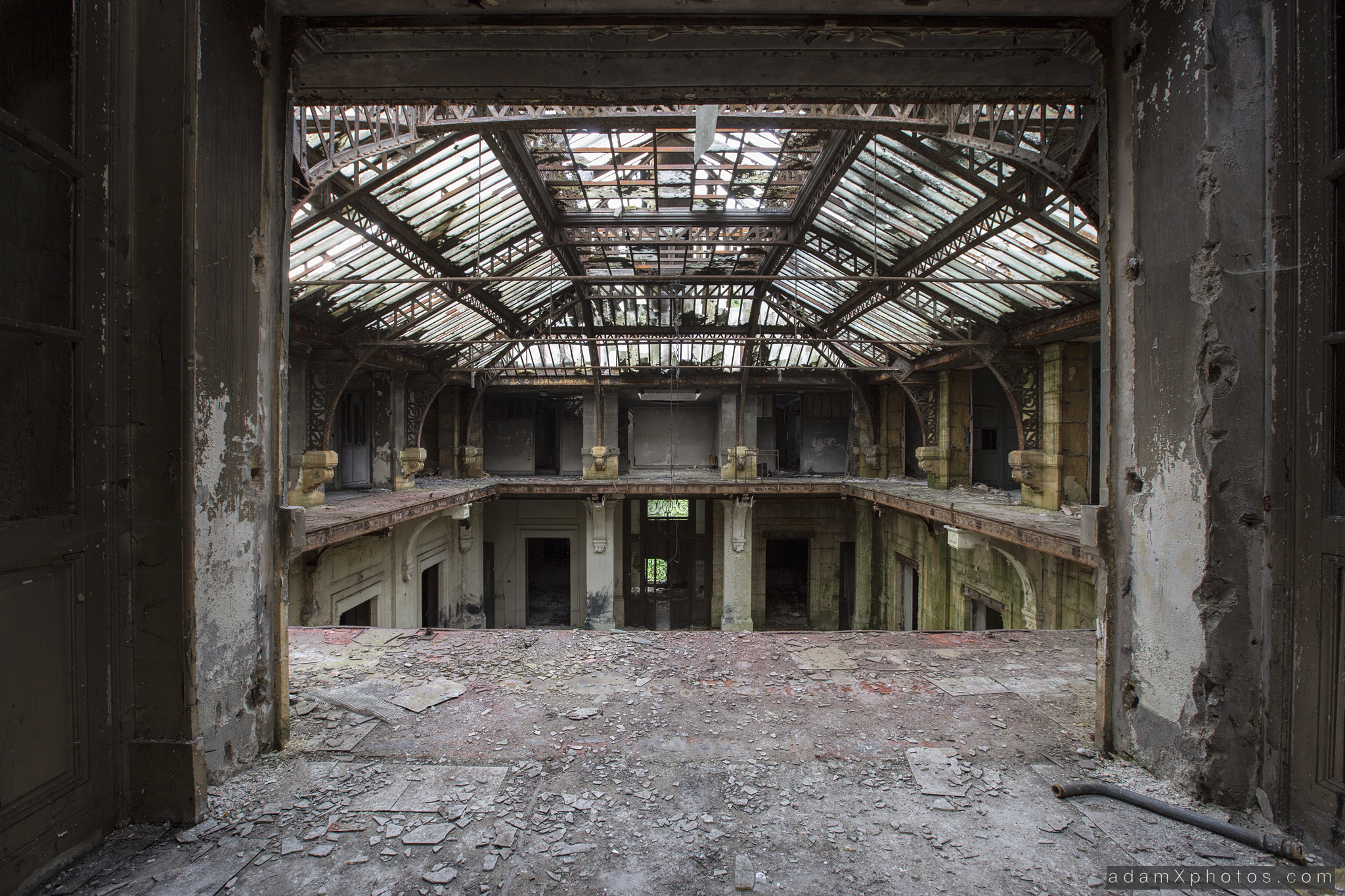 Explore #6 of the Operation Baguette tour

By the time we had finished exploring Pensionnat Catholique it was mid-afternoon, and despite having already driven 200 miles we had the same distance still to cover to get to our hotel for the night. However I’m glad that we still took the time to pay a late afternoon visit to the deceptively interesting and distinctly creepy Bureau Central. History
The former central administrative offices for the operations of a large French commercial and industrial dynasty, Bureau Central was built at the end of the 19th Century, and was enlarged in the 1920s. However it has lain empty for many years, and despite having protected status the future of the building is uncertain.

Our Explore
I don’t know if it was just the sleep deprivation, but this whole explore was a bit strange.

To begin with we weren’t sure whether we’d be able to find a way in. Dan found one way, but that involved him posting himself through a miniscule gap between the solid steel railings of a 15 foot high gate. Great for Dan, but not the rest of us who actually have things like shoulders, pelvic girdles, normal sized heads etc. 😉 However we persevered, and soon Richie had found a way in for all of us.

Once inside we were immediately greeted by a very trashed atrium and a series of very stripped out rooms and corridors, all of which were almost pitch black due to all of the windows on the first 3 floors being completely boarded shut. So our initial impressions of the place weren’t very promising – admittedly after having being somewhat spoilt by the light, space, and grandeur of Chateau Lumiere that morning.

However, we then came across the first of the rather fetching staircases and lifts, and we soon had our first couple of shots under our belts.

As we gradually moved up and through the building it began to grow on us – first with the staircases, and then the uppermost floor, which still had some natural light coming in. It was a small pleasure to poke my head out of one of the skylights of the building whose massive and imposing edifice we had stood before only 30 minutes earlier, and briefly breathe in some fresh and dust-free air. I also came across the back of the main clock, so naturally took the opportunity to turn it around a bit!

The floor of the uppermost storey had thick glass flooring in parts, through which natural light would have passed to the rooms below. These days only the lights of our torches were bright enough to shine through. The first of the beautiful staircases. The top floor (clock face room was one of the ones to the left). Abandoned lever arch files. Reminds me, I really must give my study a tidy… …this file details how to calculate the workers’ salaries from November 1967. We dubbed this “the haunted typewriter” after Dan’s camera repeatedly and inexplicably malfunctioned as he tried to photograph it. Happily my camera appeared to have no such issues.. …but here’s what kept happening to Dan! oooooohhhHHHHHHH! 🙂
[Photo by Dan, used with permission and all rights acknowledged] ‘Mind your Ps and Qs’ Another one of those lush staircases. Looking towards the large atrium (I think thats what you’d call it?) A close-up of the clock face and ornate exterior. By the end of our explore the limited but undeniable charms of the place had rubbed off on us.

However, Bureau Central still had one more trick to play on poor Dan. The other three of us had already left the building and were waiting for him to catch us up (he was taking selfies of course). Despite the exit being only two rooms away from where we’d left him he managed to get lost inside the dark bowels of the building for what must have been a nerve-shredding 10 minutes, before finally emerging somewhat ashen-faced to be sympathetically greeted by cries of “come on!” “what took you so long?” “oh, FINALLY!” from his fellow explorers.

And so it was time to burn a couple hundred more miles, passing through France and Luxembourg into Belgium, keeping flagging energy levels going with what may well be the world’s first 3-person-1-window #stickyourheadoutofthewindowselfie before finally checking in to our hotel shortly before 10pm, having left our last hotel at 4am that morning – now THAT is a full day of exploring (and driving)! Darren, Dan, and Richie – all out of the same window at 70mph!
[Photo by Darren and used with permission]

Thanks for looking – any comments and feedback always gratefully received, and if you haven’t done so already please sign up to follow this blog, and you’ll be notified whenever I post a new report. Plenty more great locations coming very soon!