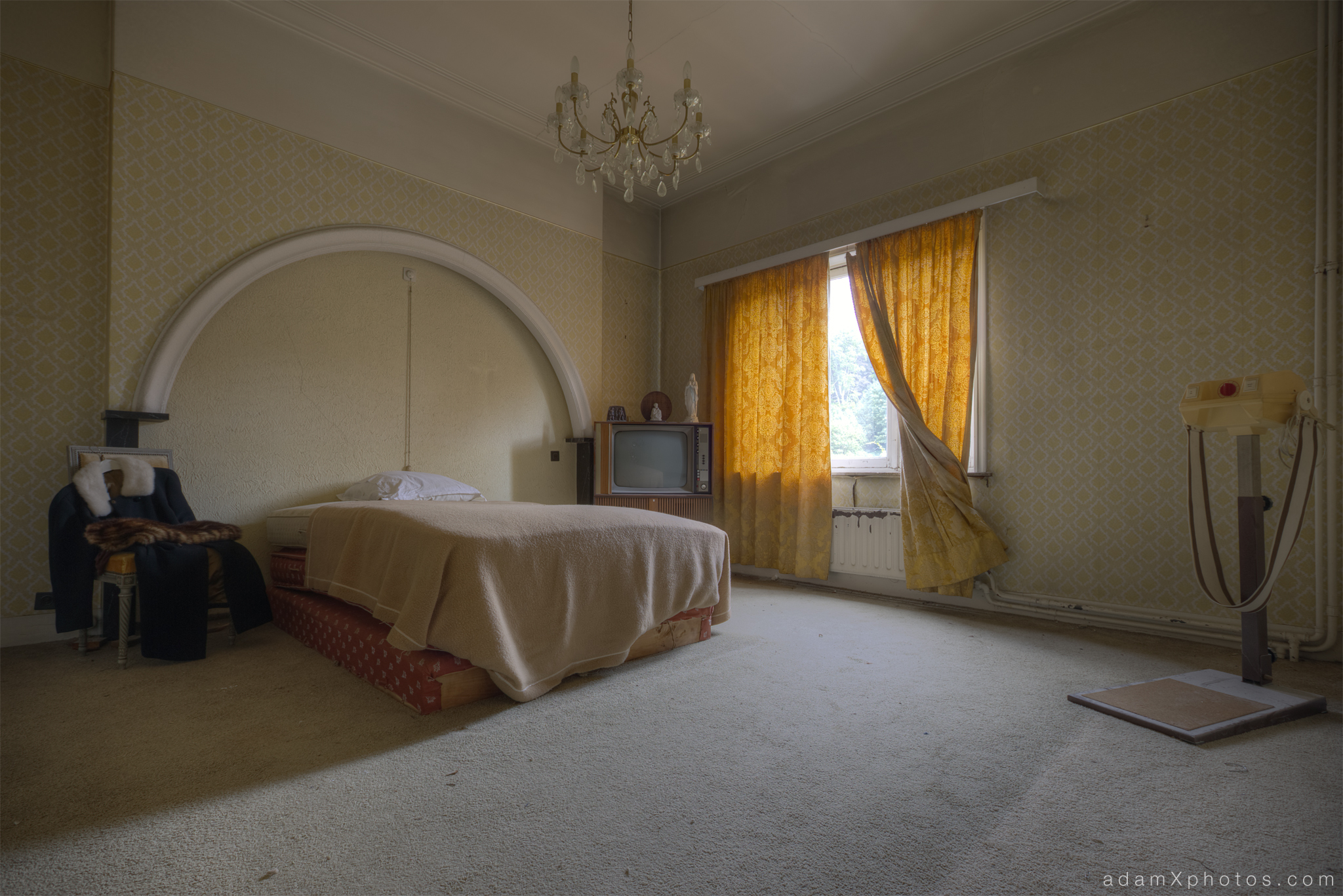 Explore #5 of the Gigawatts & Megalolz Tour

The fifth and final explore of Day One of the GW&ML tour was this abandoned townhouse, somewhere in Belgium. By this stage we were all pretty shattered and yearning for showers and beers, but decided to stop by en route to our hotel.

Myself and Dan of MrDan Explores quickly scouted out the access, and had a look inside. We were both a bit freaked out to see a curtain hanging down from the ceiling midway up the staircase leading from the ground floor up to the first floor – were there squatters and/or junkies upstairs?

Dan tried a few calls of “Bonjour?…. Bonjour?” – honestly, lack of sleep and zigzagging all over Belgium it’s nigh on impossible to keep track of what language the locals are likely to be speaking, and some decidedly rusty schoolboy French was pretty much all we had in our linguistic armoury anyway.

There was no reply, so we cautiously made our way upstairs. After a quick scout around it was clear that no-one was home, so we made our way back to get the others.

Unfortunately we got spotted on our second approach by a guy who runs a Sex shop just over the road! We had a brief conversation with him in his broken English, which was still better than we would have managed in French? Flemish? Esperanto? We assured him we just wanted to take a few photos, and were only planning on being 10 minutes. He warned us that there had been a lot of trouble with drugs and undesirables hanging around, and the police were often called out. He said it would be risky for us. I said “But you’re not going to call the police on us if we go in are you?” He said no, and that he had a shop to run.

We decided to press on and still take some shots, although none of us wanted the hassle of having to deal with the police turning up and questioning us at the end of a very long hot day and no sleep at all the night before. Plus those ice cold beers at our hotel were practically shouting to us by then! So we agreed to make a lightning raid, in and out in 5 minutes, and be on our way.

As a result, it was sadly a very rushed and not the most enjoyable of explores. My tiredness had made me perhaps overly paranoid that the police were going to turn up at any minute, and my photos were all rushed and pretty rubbish. I’ve salvaged a few here, just to give a brief feel for the place, but hopefully I’ll get to pay a proper revisit some other time.

This bedroom was still considerably tidier…

I always find it melancholic seeing framed pictures of family members left behind – remnants from another time.

Another quick shot of the Red Room…

…and one from the living room.

After just a handful of grabbed shots we made our exit and were soon checked in to our cheapo hotel and enjoying some fine Belgian beer at the bar! 🙂

Thanks for stopping by… coming up next is my report from the site around which our whole weekend was planned: the gigantic Powerplant Giggawatt – a huge powerplant which is in the process of being decommissioned – with workers and security to be dodged! Photos from that spectacular location coming very soon…