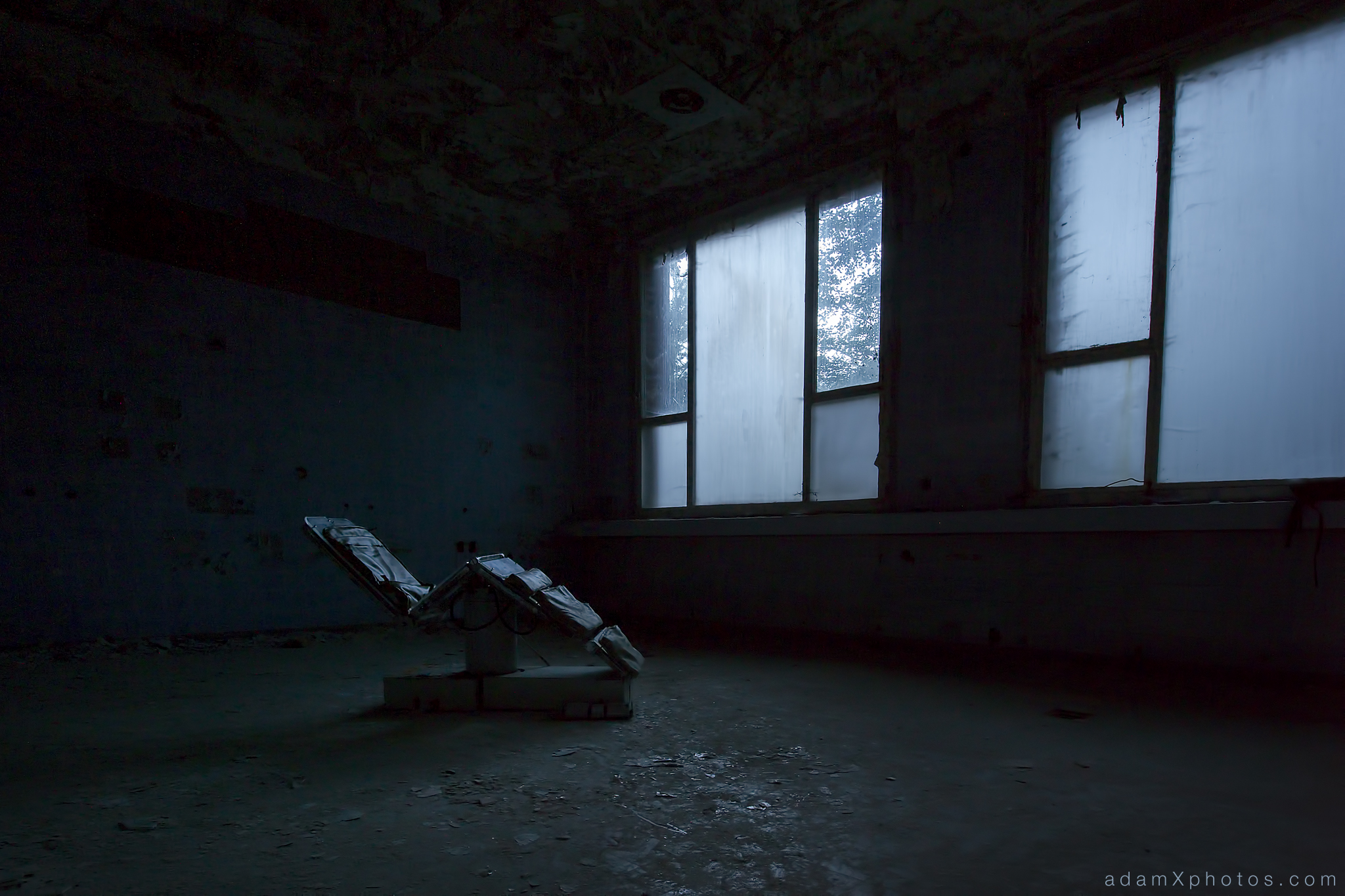 Explore #4 of the Berlin or Bust Tour

As evening fell at the end of our first day of exploring in Germany, James and I just about had the energy to pay a short visit to this sprawling overgrown hospital complex, abandoned deep in pine woodland. This report is a first for this blog as it only has one photo! But hopefully you’ll find the photo and my story of our explore worthwhile.

History
I have not found much history of the hospital, other than that it served the vast Soviet army forces which were stationed all around this region from the end of World War II until shortly after German reunification in the early 1990s. It has lain abandoned ever since.

Our Explore
It was already dusk by the time we arrived, so we decided to try and find a clocktower or similar to climb up inside to admire the setting sun, and then have a quick recce to assess whether it was worth a longer revisit during daylight hours.

We picked our way through the overgrowth, which was extremely thick and had encroached over former roads and footpaths and right up to the walls of the buildings – nature can achieve a lot in quarter of a century. After a bit of searching we had located the main building and found a way in. We spotted a promising looking clocktower, but despite lengthy searching we could not find any stairs or other visible way of getting up into the tower itself.

James made a brilliant little GoPro video of our trip to Germany, which can be viewed here – the is footage of us exploring this building is between 2m:12s and 3m:14s.

We had previously seen photographs of an old operating theatre and famous (in urbex circles anyway!) chair and overhead light. We had heard that the light had sadly now gone (presumably stolen by metal thieves) but that the chair still remained. By now it was almost completely dark, and we were navigating our way around the empty corridors and rooms by torchlight. We were just about to call it quits and head back to the car when we saw one more long corridor. I got to the end, turned the corner, and there hiding in the gloom was THE CHAIR! I excitedly called for James, and we set up our cameras and tripods.

Click on the photo to VIEW LARGE – definitely recommended for this one! The shot above is the single useable frame I captured – it was taken with an exposure of 167 seconds, and then lifted further in Photoshop. We were stood in the pitch black (to the naked eye), deep in the bowels of a smashed and forgotten hospital buried deep in overgrown woodland miles from anywhere in a country that I’d never been to before that morning. But whilst we were focussed on capturing our photographs we paid little notice as late dusk turned to night and complete darkness fell around us. It was only when we came to find a way back out of the complex, at well gone 9pm, that the disorientation and true tiredness of 36+ hours without sleep really hit us.

We climbed out of a broken window into thick undergrowth, and fought our way through brambles, bushes, and small trees. We searched by torchlight for any signs of old footpaths underfoot. The branches of larger trees loomed suddenly out of the dark in front of our faces. An owl screeched in the near distance. The Blair Witch Project came briefly to mind. We tried to bring up Google maps on our phones to get our bearings, but there was no signal. Eventually we found an overgrown tarmac service road, and I thought I recognised which direction the car was. But in the dark and the overgrowth there was no clear or long line of sight, and I honestly think we were about 2 or 3 minutes away from properly freaking ourselves out! Thankfully my instincts were correct, and we both laughed out loud in sheer relief when our flashes of torchlight fell across the red paint of James’ car a few moments later.

…and so, at nearly 10pm, having not slept for a day-and-a-half and driven over 850 miles, we finally headed to our hotel for some well-earned draft German beers which went down an absolute treat…

…with alarms set for 4.30am the next morning. First up at dawn on Day Two was the site around which we had planned the whole trip – the incredible and incomparable Beelitz-Heilstätten hospital complex. My reports from there are coming up very soon, so if you’ve not already done so please sign up to follow this blog, and you’ll be notified as soon as I post them.

Thanks for stumbling around in the dark with me, James, and an owl.