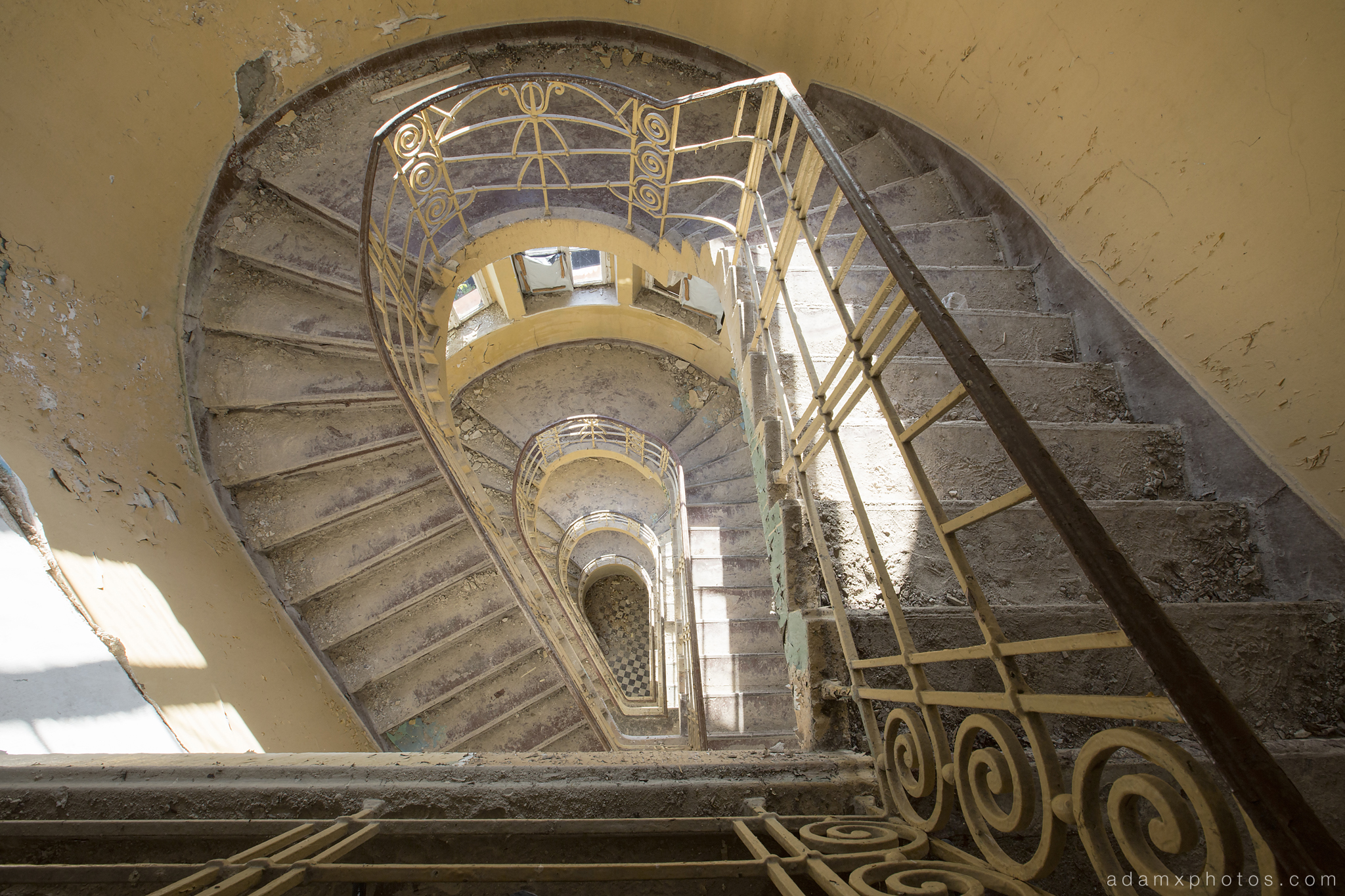 Explore #9 of the Berlin or Bust Tour

After James and I had spent the morning exploring Beelitz, followed by a flying visit to see the infamous Nazi Eagle at Krampnitz Kaserne, we then headed North of Berlin. We had to abandon our next planned location due to various issues (a stupid amount of barbed wire, too many security milling around, etc) so decided to cut our losses and head quickly on to Hohenlychen.

History
A superbly written potted (very dark) history of Hohenlychen can be read on Abandoned Berlin’s blog here. Much of the history below is abridged from his excellent report which I recommend you read – all rights acknowledged.

Hohenlychen was founded at the turn of the 20th century as a complex of sanatoriums for the treatment of tuberculosis and other ailments. The complex was used as a military hospital during the First World War, after which the darkest period in its history began.

With the 1936 olympics approaching the focus of the site moved away from the treatment of TB and towards sport. A swimming pool and sports centre were built under the control of chief physician Karl Gebhardt, an old school friend of SS head Heinrich Himmler. Key figures within the German hierarchy were at times treated or entertained here, including Himmler, Rudolf Hess, Hitler himself and their guests from all over the world.

Following the outbreak of World War Two, Hohenlychen was again used as a military facility. In 1942 Reinhard Heydrich (a Nazi general and one of the main architects of the holocaust) was gravely injured in an assassination attempt in Prague, and Gebhardt was sent to treat him. Wrongly believing that Heydrich would recover, Gebhardt declined to give him the early antibiotic sulphonamide as suggested by Hitler’s physician Theodor Morell. When Heydrich died of blood poisoning eight days later, Gebhardt’s position looked decidedly precarious. Himmler ordered him to conduct tests to prove that sulphonamide wouldn’t have saved Heydrich – although such experiments would also have wider application as at that time many German soliders were dying of blood poisoning.

On 20 July 1942 Gebhardt began a series of horrifying experiments on 57 inmates from the nearby Ravensbruck women’s concentration camp. To simulate battlefield injuries Gebhardt and his cronies broke their victims’ legs, sliced them up, sowed bits of wood/fabric/glass/debris into open wounds, and left the injures to fester for days. Some had pus deliberately injected into their veins. Only then would Gebhardt administer drugs and monitor their effects. He presented Himmler with his reports, which played down the effectiveness of sulphonamide and played up that of Katoxyn (which he had given to Heydrich) and was exonerated of all blame in Heydrich’s death.

Gebhardt’s life ended in a noose in June 1948, after he was convicted of war crimes and crimes against humanity at the Nuremberg Doctors’ Trial.

The Red Army invaded Hohenlychen without a fight on 29 April 1945, and stayed for nearly 50 years, using the buildings as barracks, a hospital and maternity ward until they finally left on 31 August 1993.

Our Explore
I’m so glad we decided to head to Hohenlychen. After an easy access into the first building the access to the subsequent buildings became progressively trickier – and hence more rewarding when we succeeded in finding ways in. The last building was a very tight squeeze, but it’s quite useful exploring with someone very similar in height (tall) and build (erm, lapsed athletic) as it means that either you both manage to get in or you both don’t – there’s nothing worse than some skinny midget taunting you from inside a derp! 😉

By the time we had arrived it was already late afternoon, and we ended up pressing on until well past sunset and into almost complete darkness. It was only when we got back to the car at 10pm that we remembered that our motel was well over an hour away! These beautiful stairs were a definite highlight. Those stairs – looking up… …and with Mr Kerwin! With darkness falling we couldn’t resist squeezing our way into one last building… and discovered this old plunge pool in the basement. And we finished off our explore admiring this ornate lift and some peeling paint goodness. What a great end to probably my longest single day exploring to date – 6am at Beelitz until 10pm at Hohenlychen – just a mere 16 hours at it! 🙂

Coming up next: a couple of great locations that we explored during our epic journey from Berlin back to Norwich…

Thanks as always for stopping by – any comments or feedback always gratefully received.